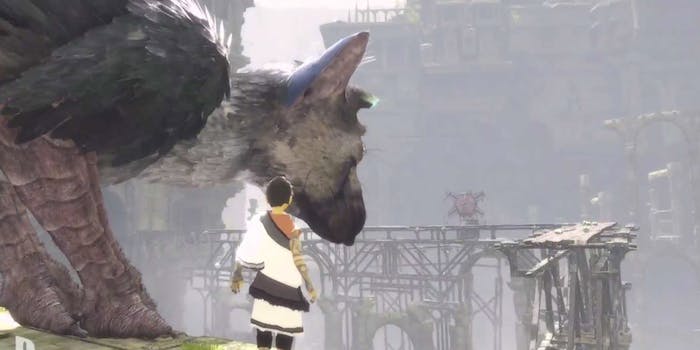 The Last Guardian is finally happening

The gaming world can finally breathe easy, after years of nervous waiting.

The Last Guardian, the spiritual successor to Ico and the emotionally-devastating masterpiece Shadow of the Colossus, was announced tonight by Sony at its 2015 E3 press conference.

Stuck in development hell for years, The Last Guardian felt like a game that would never be delivered. And what a loss that would have been. Shadow of the Colossus, the work of celebrated developer Fumito Ueda has been held up as a prime example of how video games exist as art.

The powerful bond between players and their loyal steed, Agro, and the innovative, unnerving mechanics as players assaulted the giant Colossi, and the emotional shock of the game’s ending created memories that have never faded among the gamers who experienced Shadow of the Colossus.

You can already see the seeds of a similar experience within the announce trailer for The Last Guardian, as a little boy and his companion, a giant fantastical creature, attempt to cross a decaying, wooden scaffolding built over a pit in the middle of what looks like an ancient temple.

When the creature, a cross between a dog and a bird?, whines as his human companion is threatened with death or scrabbles for purchase on the verge of falling into the pit, we’re handed tiny moments loaded with promise.

The Last Guardian is scheduled for a 2016 release. After the many years of waiting for a sign that this game would actually be delivered, we know the audience will be patient to wait just a little longer.