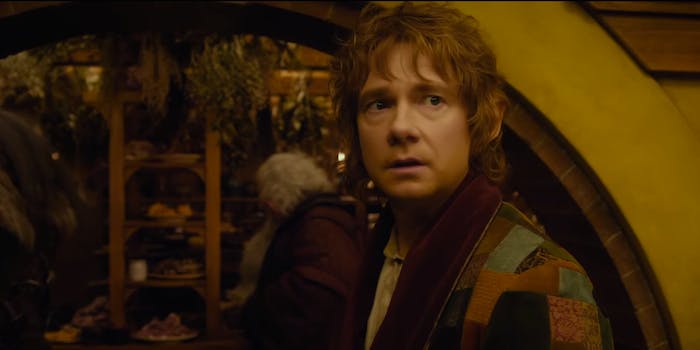 Many of the problems fans had with the movies are gone with some editing.

Someone finally took the Hobbit trilogy away from Peter Jackson (at least figuratively) and gave Tolkien fans the movie they deserve.

A decade ago, we could have never imagined wanting Jackson’s films to be shorter; the films in The Lord of the Rings trilogy were at least three hours apiece, and the extended editions added another 30-40 minutes, which fans lapped up. But it’s 2015, and here we are with, as many keep pointing out, a 300-page book spread across three blockbuster films; Bilbo’s explanation of his existence after the Ring stopped him from aging—“I feel thin, sort of stretched, like butter scraped over too much bread”—is fairly accurate.

In comes someone going by the username tolkieneditor, who sat through the hours of footage to put together one (mostly) seamless fan edit—and at least one other person is making one for people to watch.

“Let me start by saying that I enjoy many aspects of Peter Jackson’s Hobbit trilogy,” tolkieneditor wrote. “Overall, however, I felt that the story was spoiled by an interminable running time, unengaging plot tangents and constant narrative filibustering.”

Tolkieneditor’s reasoning for reinventing The Hobbit was simple. He or she wanted to bring the narrative back to Bilbo, who was “rendered absent for large portions of the final two films,” along with cutting out all of the unnecessary crap Jackson added from the Appendices or the minds of the screenwriters. Speeding up the pace, albeit not enough to lose the audience, was also a priority.

Several scenes from An Unexpected Journey, The Desolation of Smaug, and The Battle of the Five Armies have been tightened or cut entirely, turning the eight-hour-plus ordeal into a four-hour fan affair (plus a half hour for credits). Basically, if it wasn’t in The Hobbit, it got axed. Tolkieneditor also made a point to make the fan edit DVD quality—or as close to it as possible.

That means those LOTR cameos you were initially excited about are now gone. There are no small appearances of older Bilbo and Frodo, Legolas (who was probably there at the Battle of the Five Armies but never mentioned) is only seen briefly, and the presence of Elrond, Galadriel, and Saruman are limited. Action scenes aren’t nearly as long, and we don’t see Gandalf’s trek to Dol Guldor.

Although Jackson tried to fix the lack of female characters by creating one of his own in Tauriel, The Hobbit is pretty much a sausage fest now. That means the completely unnecessary love triangle—which spawned that other film attempt—is gone too, and fans can breathe a sigh of relief.

However, some scenes such as Bilbo’s encounter with Gollum, the spider battle, and his conversation of Smaug were left untouched “since they proved to be excellent adaptations (in no small part due to [Martin] Freeman’s performance.)”

The creator offers ways for Tolkien fans to view a lower-quality version of the completed film with a couple of torrent links (the 2GB cut as opposed to the 6GB cut) as well as a cleverly hidden mp4 link for people to watch and potentially download.

That’s an adaptation fans could probably get behind, at least until Warner Bros. puts a stop to the whole thing.