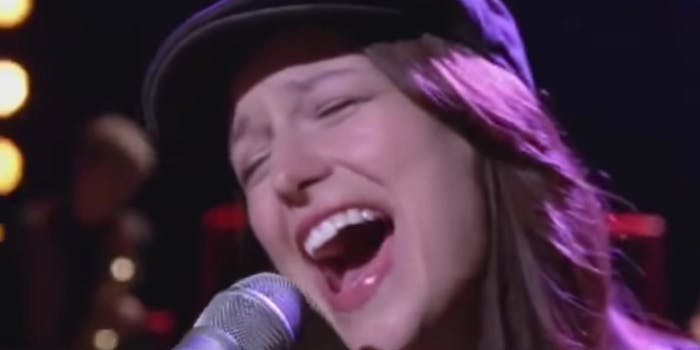 ‘Supergirl’ and ‘The Flash’ are crossing over—but will we get singing and dancing?

This is clearly bigger than CBS, the CW, or the DCU. It's for the good of humanity.

We couldn’t be happier that Barry Allen, a.k.a. the Flash, and Kara Zor-El, a.k.a. Supergirl, are getting a crossover event. We only have one question: Will it involve singing and dancing?

We all kind of want The Flash/Supergirl crossover to end with a big musical number, right?

Thanks to the combined wills of CBS and the CW—not to mention the ratings potential of DC Comics characters—the two superheroes will unite on an upcoming March episode of Supergirl. Grant Gustin’s Barry will be making a special trip to visit Melissa Benoist’s Kara.

There are plenty of good, logical, comic book-y reasons to celebrate this union. Both Barry and Kara are shining beacons of light. They’re DC’s most optimistic and perky superheroes, which takes talent given how maudlin most of the DCU’s finest tend to be. While other DC heroes are perennially deemed gritty, Kara and Barry are both devoted to their families and friends and committed to being symbols of hope for the people. Clearly, they have a lot in common and a lot to bond over.

The two shows also share a creative team, including executive producer Greg Berlanti, which should make their synergy as seamless as the Flash’s other crossover events with Arrow and the new Suicide Squad. And from the standpoint of DC’s standing in the eternal Marvel vs. DC rivalry, this is a smart move that should energize the DC fanbase.

Plus, look how cute!

Secret is out. @melissabenoist and I are gonna get to have some fun on Supergirl together..

But by far, the most important aspect of this dream team is the musical one. Gustin and Benoist have a shared history on Glee. Gustin played the dreamy (but evil!) Warblers crooner Sebastian Smythe:

Meanwhile Benoist shone as Marley Rose, a late-season member of the New Directions:

In fact, Glee even gave us our first look at Benoist’s superhero credentials:

So far, Supergirl has yet to put Kara’s vocal chops to the test—although the show clearly loves its singers. Not only did it cast recent Grease star and Broadway veteran Jeremy Jordan as her co-worker Winn, but they cast her Glee co-star and real-life husband Blake Jenner as her love interest Adam.

Barry Gordon, however, has teased us with his own all-too-brief bit of Grease magic:

We can infer much from all of this:

Conclusion: Supergirl‘s crossover event is gonna end with one hell of a duet.

Correction: A previous version of this story stated the incorrect name of The Flash.

Screengrab via The Unholy Trinity/YouTube