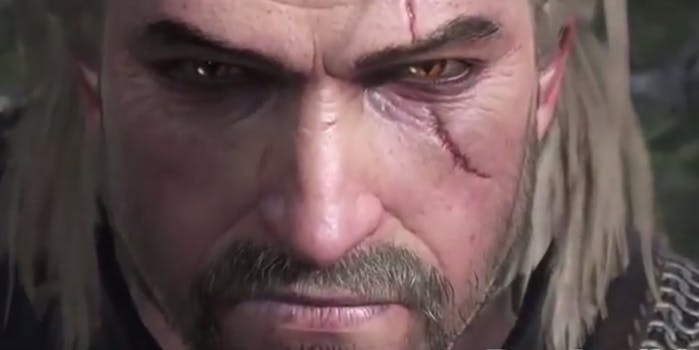 Meet John Gamename, the face of nearly all video games.

Women are super difficult to animate. We get it. Men are totally normal and stuff, while women have all these weird extra parts and mannerisms that probably take years of training to understand.

That, and only that, is the reason why so many video games have male protagonists. Obviously.

At this year’s E3, the games industry unveiled an impressive array of new titles, from the hotly anticipated Assassin’s Creed sequel to a beautiful new Zelda game. But while a huge amount of time and effort went into the design of all these games, many of them seemed to suffer from an easily fixable flaw: Generic male protagonists.

Although there were a handful of exceptions, most of the main characters in big-budget action and combat games were variations on the same theme: angry, unshaven white men. This video counts down the top 40 characters that follow this cliche, all of them glowering through a mist of testosterone-fuelled rage.

This laundry list of angsty, stubbly white guys with guns is a perfect example of the John Gamename phenomenon, where John Call of Duty looks like he could easily be swapped with John Homefront without it making a great deal of difference.

After Ubisoft said that female characters were too difficult and expensive to include in Assassin’s Creed: Unity and then followed it up with basically the same statement about Far Cry 4, character design has become a major topic of discussion once again.

Most of the games featured in this video had a multimillion dollar budget, and pride themselves on providing gamers with high-quality, immersive gameplay. Individual eyebrow hairs, raindrops and blades of grass are all picked out in loving detail.

For an action game like Metal Gear Solid or Assassin’s Creed, we’re obviously not expecting a cheerful, happy-go-lucky lead character. But this never-ending parade of interchangeable male protagonists is starting to get ridiculous.

If big-budget game developers really do feel that the only interesting type of character is an angry white guy, they should just admit it. The excuses about “realistic gameplay” and the difficulty of animating female characters are starting to wear thin.