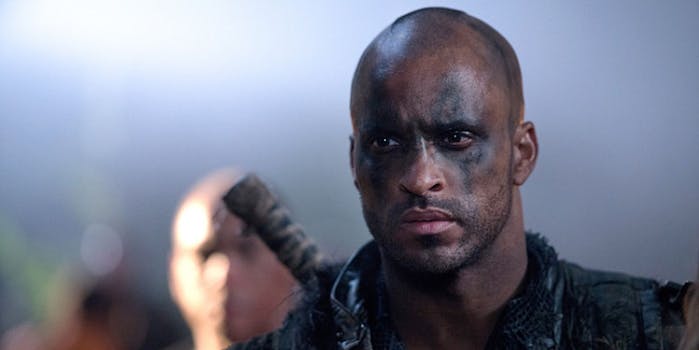 Whittle's role in 'American Gods' may have been a factor.

Warning: This article contains major spoilers for Season 3 of  The 100.

Whittle gave an illuminating interview with AfterBuzz TV about his role as Lincoln on the hit CW show. While lighter fare was touched upon (like Whittle’s go-to karaoke songs and his love of Guns N’ Roses), his comments about Rothernberg and his character’s treatment leaped out.

“This is the one character who can protect everyone,” Whittle said about Lincoln’s diminishing role. “He’s supposed to be this warrior. He’s supposed to be the link… who could’ve helped on all these missions and then he got thrown in a cell and we kinda came back to him for about 30 seconds in each episode.”

Already tapped to play Shadow in the forthcoming television adaptation of Neil Gaiman’s American Gods, Whittle certainly wasn’t long for The 100. Whittle’s character was originally set to leave after season three. Instead, he was sentenced to death in the season’s ninth episode, which aired March 31.

The actor had actually tried two previous times to exit the show to no avail. He claims that Warner Brothers’ Peter Roth and CW President Mark Pedowitz ultimately lured him back and that he would gladly work with the two again. He had very few kind words for showrunner Jason Rothenberg, though:

This is going to be the most controversial thing I will say, is that basically Jason Rothenberg abused his position to make my job untenable. What he did was disgusting, and he should be ashamed. A lot was made of what my mom said all over Twitter, but everything she said was true. He was professionally bullying me, cutting out all the storylines I was supposed to be doing, cutting lines—cutting everything out—trying to make my character and myself as insignificant as possible to the point that it was starting to get me down. And fortunately I was surrounded by an incredible cast and we looked out for each other.

Whittle went on to say that, because of the lack of scenes, he spent six weeks at home in Los Angeles instead of on location in Vancouver.

“[Rothenberg] chose to belittle me and neglect my character and myself. I often had questions and emails were ignored and things like that. It was ridiculous,” Whittle said in the interview. On multiple occasions, Whittle claims he was asked to drive to Santa Monica multiple times to speak with Rothenberg face to face to work out these issues, as the showrunner was allegedly rarely, if ever, on set.

The conflict between Whittle and Rothenberg has been playing out publicly for months, after Whittle’s mother tweeted about the situation.

Finally got full story from my son,@JRothenbergTV should be ashamed! Disgusting behaviour from grown man & one in 'power to an honest person

Even as a boy Rick always stood up for himself & others against bullies, I'm proud he continued this trend & glad karma rewarded him

I hope he shares the sad truth so u all understand why he had to walk away. Nobody should have to deal with bullies alone, talk to someone.

This isn’t the first controversy for The 100. In March, Rothenberg took to Medium to apologize and elaborate about the decision to kill off Lexa, a queer protagonist who carries on a romantic relationship with a bisexual lead. While the reasoning was fairly straightforward—a conflicting role on Fear The Walking Dead forced the writing team to come up with a quick exit for actress Alycia Debnam-Carey—fans were frustrated by the the tired trope that her inclusive character sadly played into and devastated to see her meet a bitter end so swiftly.

Rothenberg’s response to Whittle’s allegations, however, was far more curt:

Ricky Whittle is a talented actor; I appreciate his work on The 100 and wish him all the best moving forward on American Gods.

Despite his harsh words, Whittle has been insistent that fans stick with The 100 and support the cast and crew he forever considers his #vanfam. Before concluding his interview, he left fans with one final thought: “Maybe the show needs a showrunner that they deserve.”