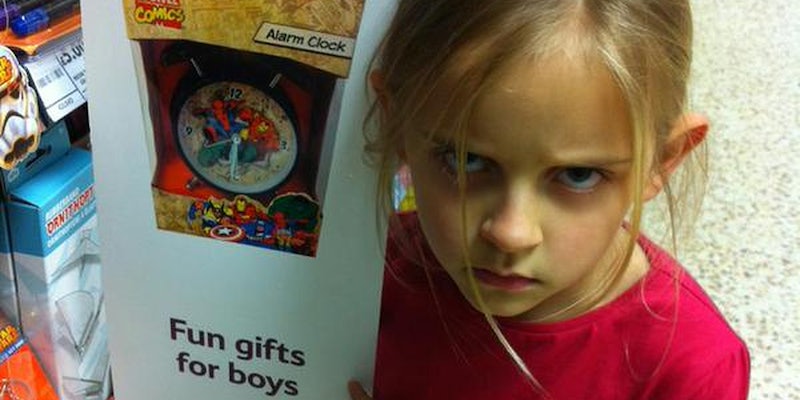 Maggie isn't amused by a sign that says a Marvel clock is only for boys.

Tesco is removing sexist signs from all of its stores after a photo of a 7-year-old girl criticizing the sign—which said that a Marvel alarm clock was only meant for boys—went viral.

The girl, whose name is Maggie, spotted the sign in a Tesco store in the UK town of Poole, in the county of Dorset. Maggie, who watches The Flash and already loves Batman, Superman, Spider-Man, and Wonder Woman, thought the sign was ridiculous. She pointed it out to her mother, Karen Cole, and said that Tesco was “being stupid, aren’t they?”

My superhero loving 7yo daughter not impressed when she spotted this sign in @Tesco today @LetToysBeToys pic.twitter.com/8F3bsRv6PK

The product in question was a Marvel 4-inch alarm clock featuring Spider-Man, Iron Man, and the Incredible Hulk. The box also includes Wolverine, Captain America, and Thor. Unsurprisingly, none of Marvel’s female superheroes are featured on the clock.

The photo traversed social media like wildfire and served as a stark contrast to another viral image, a letter from the 1970s allegedly included in Lego boxes indicating that Legos were for both boys and girls. The Lego image also reminded parents that children shouldn’t be limited to creating items based on their gender, further distinguishing the Danish company’s approach from Tesco’s own marketing strategy.

Cole’s photo of Maggie was enough for Tesco to rethink its marketing, leading to its decision to remove the sexist sign from all stores.

“This alarm clock would make a great gift for both girls and boys,” a Tesco spokesperson told BuzzFeed News. “The sign has been removed and we’re sorry if it caused any confusion.”

After further inquiry, Tesco confirmed that the sign would be removed from all Tesco stores.

Tesco’s sign is just the latest example of a company excluding girls from its marketing and neglecting to serve a large group of people who want to buy their products. In just the past year or so, DC Comics came under fire for sexist T-shirts such as “Batman’s Wife,” Children’s Place featured a shirt telling girls that they’re bad at math, Marvel caught flak for not featuring any boy’s Guardians of the Galaxy products with Gamora on it, the Disney store received scorn for not featuring anything with Leia, and let’s not forget the Barbie book telling girls that, while Barbie can design software, she’ll need help from the boys to actually code it.

None of this sexist marketing turned Maggie off from being a fan of nerdy things, according to her mother.

“[A]s well as superheroes she loves Doctor Who, Minecraft, dragons, skeletons and zombies (she had a cemetery cake for her birthday!) but also likes Frozen, princesses, kittens etc.,” Cole told BuzzFeed News. “She just thinks shops labelliing [sic] toys for boys or girls is silly: ‘I can like what I want.’”