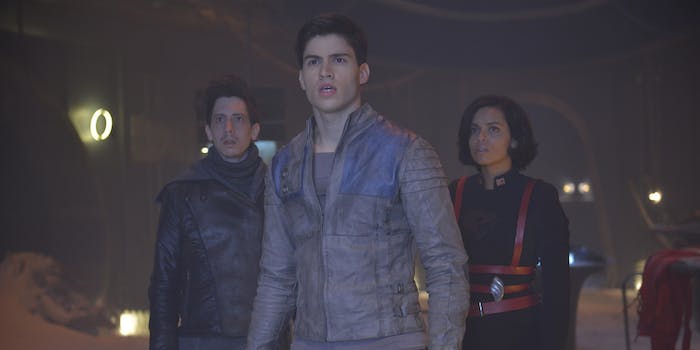 The new trailer reveals Adam Strange, a man from Earth who time-travels back to the planet Krypton.

The full trailer for Syfy’s Krypton is here, and we have some exciting news. Despite being set on an alien planet, decades in the past, they found a way to include a fratboy-looking guy in a baseball hat and a hoodie. You know, in case all the sci-fi/fantasy stuff gets uncomfortably weird.

The guy in question is Adam Strange, a man from present-day Earth who somehow finds himself on the planet Krypton, hanging out with Superman’s grandfather Seg-El. The show follows Seg-El as he tries to rebuild his family’s honor while maintaining a secret relationship with Lyta Zod, an ancestor of the Superman villain General Zod.

DC Entertainment’s Geoff Johns revealed this week that instead of being a straightforward prequel, Krypton will play around with the familiar DC Comics timeline. By introducing Adam Strange as a time traveler, they gave themselves more leeway. By the look of things, Seg-El may face a choice between saving his planet and allowing it to explode so Superman can exist.

Showrunner David S. Goyer (The Dark Knight trilogy) said they have a “seven, eight-year plan” for the show, ambitiously describing it as “the gateway into the DC science fiction universe.”

The aristocratic alien premise has a slight Game of Thrones vibe; an intriguing departure from DC’s more traditional superhero shows like Arrow and Supergirl. Then again, Marvel‘s Inhumans had similar aims. There’s an undeniable hint of Inhumans here, toning down a fantasy concept with rather generic-looking characters in leather jackets. Would it kill them to include more tinfoil robes or something?

Krypton arrives on Syfy on March 21.