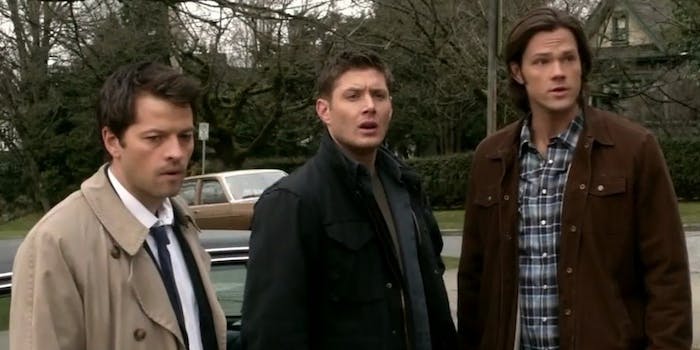 Making fun of their fanbase hasn’t worked in the past, and it won’t work now.

Supernatural has a long history of meta episodes, with mixed results.

The episode where Sam and Dean were transported onto the actual real-world Supernatural film set was pretty funny, but fans were less happy when the show decided to break the fourth wall and have Sam be kidnapped and forced into marrying an obsessive fangirl. The episode with the Supernatural fan convention didn’t go down too well either, partly because it inaccurately assumed that most of the show’s fans were male.

For Supernatural’s 200th episode, it looks like we’ll be getting another one-off gimmick storyline, but hopefully not one that will annoy the fans. Like Buffy and Scrubs did in the past, Supernatural is going to be doing a musical episode. Or in the words of showrunner Jeremy Carver, “musical-ish.”

“We’re going pretty meta. I would just describe it as something of a love letter to our fans and there will be songs,” Carver told E!Online. He wouldn’t reveal whether Sam and Dean would be singing, but added that there would “potentially” be some dancing involved, and that the soundtrack would be a mixture of covers and original songs.

Supernatural’s history with silly one-off episodes means that fans have been waiting for a musical for a long time, so this announcement is already getting people excited for season 10.

Supernatural the musical is gonna be a thing I’m choking

My one desire for the musical #supernatural episode is that Cas has a solo. That’s all I really want.

The only potential cloud on the horizon is the episode’s title: “Fan Fiction.” But surely Supernatural’s writers have learned their lesson by now, right? Making fun of their fanbase hasn’t worked in the past, and it won’t work now. Hopefully the title is a double bluff, like the season 7 episode “Slash Fiction,” which, thankfully, did not involve any slash fiction at all. No more than your average episode of Supernatural, anyway.