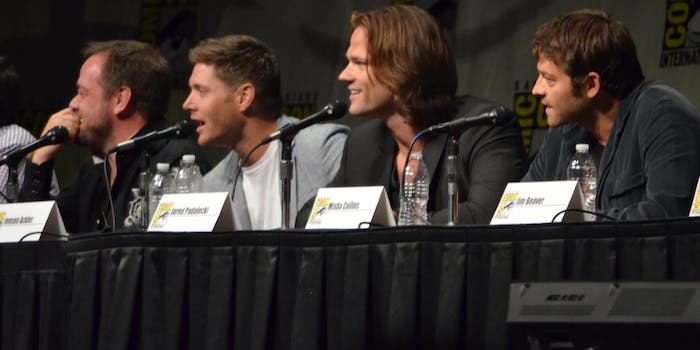 Was this noted Destiel shipper really a danger?

A noted Supernatural fan who organized a fandomwide gift-giving campaign for the cast and crew of the show has been banned from all future Creation Entertainment conventions—and it may be because she ships Destiel.

Emily Rose, who goes by the Twitter and Tumblr name exorcisingemily, was ejected from a main panel at Chicago’s annual SPN convention, Chicon, this morning. She was attending on a press pass for multifandom blog site the Geekiary.

And I’m seated for J2 gold panel! I’ll be back at The Geekiary livetweeting for you all. #ChiCon

But Rose never got to see the panel. According to her Twitter, she had been reported to the personal bodyguard of Supernatural stars Jared Padalecki and Jensen Ackles as “a threat” to the actors.

So apparently I am a security risk, for the controversial act of shipping Destiel. Incoming long tweet, and impeding wank with my apologies.

The Geekiary subsequently confirmed that she had been reported as “a threat” and banned from the remainder of the convention. On their Tumblr, they issued a statement standing behind Rose, noting, “We trust her credibility as a reporter and her sincerity as a person,” and that the con was clearly “told false information.”

But Rose later updated her Tumblr with more details about the incident, including the news that she’d been banned, not just from one Creation Entertainment event, but from all of them:

I had been in my seat ten minutes or so, speaking to the people in the seats next to me, when a gentleman approached. Older, built, black suit and an earpiece he asked me “Are you Emily Rose?”

“Can you come with me, please?”

I was led to the side of the stage nearest me, just past the curtains near the door. The gentlemen politely but firmly told me that I was being asked to leave the premises.

I asked why I was being removed from the room, and Valerie from Creation told me that Clif Kosterman, the bodyguard for Jared and Jensen, had informed them that I was a security threat to the boys. She did not know why, but my general understanding is that Creation can’t NOT act on these matters, as if they ignored Clif’s attempts to keep Jared and Jensen safe they would be liable if they were NOT safe at the convention.

The report has thrown a cloud over the last day of the con, and deeply upset many Destiel shippers. As security risks go, it’s hard to imagine a more unassuming one. In addition to being a fandom reporter, Rose is also a moderator at the SPN anti-bullying Tumblr, which organizes reporting campaigns for Twitter trolls who harass actors and other members of the “SPN family.”

In September, Rose organized a modest gift-giving campaign for the cast and crew: @SPN10gift raised around $3,000, enough to give out small gifts to the production crew and gift baskets for the show’s four main actors. These were subsequently distributed to most of the cast and crew.

Look what I found on my desk when I came in today. Pretty awesome. Thanks to all the awesome #Supernatural fans. pic.twitter.com/wNRaNKRojr

All in all, it’s difficult to understand what actions on Rose’s part could have precipitated the action by Creation Entertainment. The Daily Dot has contacted Creation for comment. “I don’t know what is being said about me to justify this,” Rose wrote.

Even before more details were known, Destiel shippers went into organizing mode, tweeting protests at bodyguard Clif Kosterman and Creation.

I hope you have a valid reason for throwing out that fan today, because nobody is going to stop asking why. @bodyguard4JandJ @CreationEnt

@bodyguard4JandJ You made a huge mistake. You banned the fan who organized the SPN10Gift and reporter of @TheGeekiary. She is not a threat !

This isn’t the first time that a Creation-run con has seen its share of ship-related drama. At a Teen Wolf con in July, controversy erupted over the banning of Sterek-related materials from autograph signings. Then as well as now, a controversial male/male slash ship was at the heart of the banning.

@CreationEnt @bodyguard4JandJ really I will not be going to any more con’s because of this. I don’t feel safe

The “they” in this equation are the alleged group of fans who reported Rose to the con. Rose implicated a community that is well-known for being home to a subset of fandom known as “J2” fans, many of whom resent Misha Collins as well as the Destiel ship. Clashes between the two factions are a common occurrence within the fandom, but this might be the first time the tensions could have allegedly resulted in real-life consequences.

Though there’s no actual evidence to suggest that fans of Padalecki and Ackles were behind the banning, the Destiel shippers latched on to the idea and reacted accordingly:

@CreationEnt today you removed an innocent fan from Chicon based on the hearsay of people known for tagging hate & threats to your cast.

As fans waited for an update with more information, they quickly developed the hashtag #IStandWithEmily, as news of the incident spread.

This sickens, and saddens me. #IStandWithEmily

If loving Destiel & Cas makes you a “threat,” guess I’m a threat too. Better ban me from all future cons just in case. #IStandWithEmily

The hashtag even attracted attention from other fandoms:

If this doesn’t get resolved fairly then any fan of a slash ship is a target. #SwanQueen #destiel #IStandWithEmily

At press time, the Geekiary was reportedly in contact with Creation to have access reinstated. Rose wrote, “My editor is working on this through our PR contacts, as this impacts a popular blog that has press access at comic conventions as well as Creation conventions to the celebrities.”

But even if Rose is able to attend future cons, the incident may have further widened the already huge divide between the SPN creative team and the fandom itself.

The SPN fandom may pride itself on being a “family,” but as today proved, its family reunions are rough.

Update: Clif Kosterman, the bodyguard who received the report that led to Rose being banned, responded to the controversy late Sunday night by tweeting a screengrab of the tweet that apparently caused alarm:

this is all I will say about my actions today pic.twitter.com/eL2gOMXXbg

The tweet in question is part of a sarcastic series of tweets Rose made regarding fandom reactions to the SPN 10 gift campaign. The text of the tweet is actually a quote from the song “Status Quo,” from Dr Horrible’s Singalong Blog. Rose can also be seen quoting the line earlier in the month on Twitter, in a different context.

Following the admission of the tweet, which caused her to be booted from Chicon and all future Creation conventions, Rose was incredulous:

. . . *facepalm* Oh dear god I went through this nightmare today because I made a reference to Doctor Horrible?

@bodyguard4JandJ Hello, Cliff. I am a TV Reporter, and I make pop culture references in tweets. Including Dr Horrible’s Sing-Along Blog.

@bodyguard4JandJ It was during the SPN10Gift campaign, wherein I was being blasted with anonymous detractors guessing at my ‘evil’ motives.

@bodyguard4JandJ The entire conversation is still available there, as are all contextual tweets before and after. I invite you to read them.

At the time of this update, Creation had not responded to a Daily Dot request for comment; however, The Geekiary noted that a publicist for the con told them “her hands were tied” over the issue.

Update 3:50pm, Nov. 1: Creation Entertainment released an official statement on Oct. 30, clarifying that Rose has not been banned from future cons. The #IStandWithEmily hashtag is still going strong, and fans are now asking for an apology from both Creation and bodyguard Clif Kosterman.