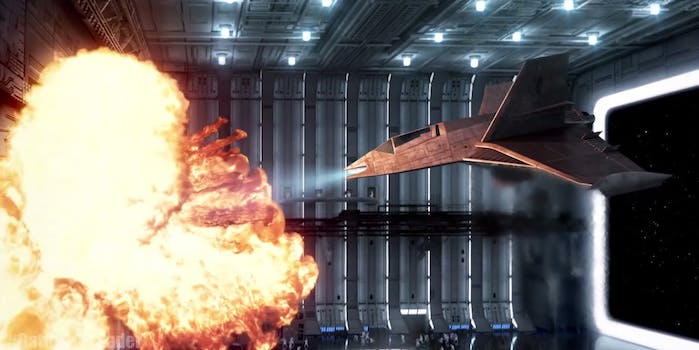 Who wins in the battle of Batman vs. Darth Vader?

The Force is with everyone, apparently.

Darth Vader kidnaps Superman, so Batman travels to the Death Star to retrieve him and face down the Sith once and for all in an epic battle between good and evil, magic and science, and heavy breathers who torture their vocal chords while wearing silly capes.

If this sounds like the epic fanfic crossover of your dreams, then you’re in luck: Machinima‘s Super Power Beat Down has brought you the thrilling scenario, and we’re betting it’s at least as exciting as anything that will happen in Batman v Superman.

Directed and produced by series creators Aaron and Sean Schoenke, this episode of SPBD is set on the space station and has just about everything a Star Wars fan could want, including a cast of storm troopers along with fantastic sets and special effects. With the trailer for The Force Awakens reportedly out tomorrow, it’s a week of celebration for the fandom. So we don’t mind Darth fighting it out on his home turf. After all, Batman is, well, Batman wherever he goes.

So does science, technology, and broody vocal chord torture win out over a dude with a red flashlight and telekinetic strangling?

We won’t spoil it, but we will say we now have definitive proof that if Batman could just release his anger, he would be a formidable ally for the Dark Side.