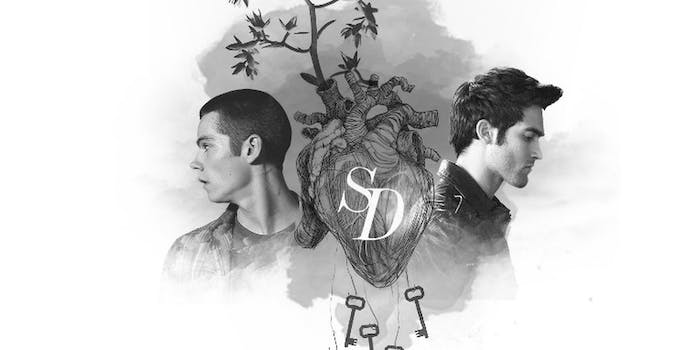 Sterek shippers in the Teen Wolf fandom just can’t seem to catch a break lately. First star Tyler Posey dissed them in an interview. Then heartthrob Dylan O’Brien declares Stiles, one half of the pairing, isn’t gay, hard on the heels of the show pairing him up with a new character, Malia, for the fourth season, whose actress declared that Stiles is her “soulmate.”

But at least fans of the love of Derek and Stiles can take refuge in the fandom, and fan conventions, right?

Maybe not, according to news surfacing from the fandom. It seems a few Teen Wolf conventions are banning Sterek and all non-canonical (that is, not on-screen) pairings from autograph signings.

Friday, Tumblr user evolmymind shared a surprising turn of events at a Chicago Teen Wolf con run by Creation Entertainment, a longtime professional producer of industry fan conventions. When it came time for Tyler Hoechlin, who plays Derek, to sign her copy of the recently published and popular Sterek Book, he abruptly refused:

When it came time for the end of the con on sunday and we got in line to get our autographs i was ecstatic and nervous for him to sign my Sterek book. I had some other art for him to sign before i gave him the copy and as soon as i took it out and put it on the table he looked happy and sad all at once. As soon as i told him that i would love for him to sign my copy he said “I’m so sorry but I’m not allowed to sign anything sterek related” as soon as he said those words i completely shut down. I think he noticed that i was upset because he continued to apologies and seemed really sincere and sorry that he couldn’t do that for me.

The fandom reacted with confusion and hurt. Then, on Saturday, it happened again:

Tyler couldn’t sign my Sterek tshirt. He was SO sorry ! #TeamWolfCon

As fans began to investigate, they realized that more than one upcoming convention had put these restrictions in place.

At least part of the impetus behind the rules seems to be a desire on the part of the convention to sell more official posters for fans to get signed, thereby upping their profit margin for the con.

AUTOGRAPH RULE: To avoid offense, NO FAN ART at all will be allowed to be signed at Creatures of the Night.

@Buffye13 we will have items that you can get signed

The problem is that even though “because we want to make a profit” is actually logical, the cons seem to be eschewing that explanation in favor of going with the “because your gay fanart is offensive and inappropriate” reasoning instead. Apparently cons don’t have PR machines.

Australian Con allowed Stydia but not Sterek (bc it isn’t canon.) When ppl complained, they banned everything. What’s logic anyway, right?

When questioned about their decision, one company, Rogue Events, which is producing next weekend’s Wolfsbane Con in the U.K., threw both reasons at the users:

@SwancyMonteiro @Darayawastaken it is not official items, therefore it cannot be signed. It is also not appropriate materiel.

The implication, at least on the part of this one con, seems to be that the organizers don’t want to make the actors uncomfortable by having fans request that they autograph Sterek and other ship-related material. If true, it would definitely signify a change in the comfort level of the actors regarding their fandom’s biggest ship.

Sterek fans have long had a vested interest in making their ship known to the creators and actors of Teen Wolf. For one thing, it’s an interaction that the show has encouraged on numerous fronts, both by filming Sterek-y extras to get out the vote for the Teen Choice Awards and other events, and by openly welcoming Sterek and other non-canonical ships as part of what makes Sterek fandom unique. There’s even a piece of Sterek fanart hanging in the Teen Wolf fanart gallery, in the hallways of the show’s production studio.

It’s hard to believe that Sterek is getting a ban when it’s arguably one of the most popular things the show has going for it. It’s one of the most massively popular ships in all of fandom, with more than 26,000 fics on AO3 alone, and millions of posts on Tumblr and other fannish corners of the Internet. It’s currently up for an award at MTV’s first Fandom Awards contest. And unlike many other slash ships, the male/male content doesn’t phase Teen Wolf, which has a gay showrunner, Jeff Davis, and several queer ships (albeit minor ones) on the show itself.

When the organizers of the Sterek Campaign created the Sterek Book last year, they were able to get copies of it autographed without problem at various cons. Ironically, the book, which was originally gifted to Tyler Hoechlin and other cast members as a token of appreciation, is no longer allowed inside the cons at which Hoechlin is a guest.

Some Teen Wolf cons like Howlercon and Bite Con confirmed that they would not be implementing such restrictions. And even at the cons that had banned fanart, some things managed to slip through:

Meanwhile, Hoechlin himself sent waves of panic through the fandom Saturday by responding to a fan’s question (“Do you ship Sterek?”) with a measured dismissal of the idea that the ship fans believe in so whole-heartedly has anything to do with actual Teen Wolf canon:

You guys do what you wanna do. But to me it’s just like, I see the characters for who they really, actually are in the show, so it’s nothing to do with the work that I do.

While the independent third-party fan conventions ostensibly have nothing to do with the official rhetoric of the show, it doesn’t help fans’ morale to get two disheartening blows to their ship in the same weekend, from an actor and numerous cons where they would normally expect their ship to be welcome.

Sterek once seemed like slash fandom’s best chance for getting a major male/male pairing to become canon on the back of fandom support. Now it seems it’s gone the way of nearly every other slash pairing we’ve seen since time immemorial: hedged bets from actors and creatives, and mishandled convention attempts to quash the pairing.

There’s nothing inherently inappropriate or embarrassing about slash. And while this kind of response is all too familiar and misguided, it will, inevitably, only make the fans that much more determined to celebrate their ship in whatever ways they can.

Illustration from The Sterek Book, via Issuu