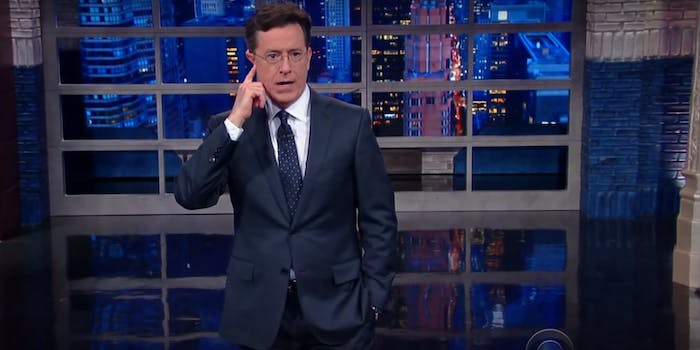 Stephen Colbert reminisces about embarrassing himself in front of George Lucas

Once upon a time, Stephen Colbert met George Lucas—and seriously embarrassed himself.

Stephen Colbert is at his best when he’s totally geeking out, and while he’s known for his encyclopedic knowledge of Lord of the Rings, he’s also a huge Star Wars fan.

We’re not remotely surprised that Colbert obsessively analyzed the Japanese trailer for The Force Awakens this weekend. And judging by this Late Show monologue, he has a very good reason to want to prove his love of Star Wars.

You see, back when he was still hosting The Colbert Report, Colbert made the world’s most awkward Star Wars mistake while interviewing George Lucas. While it wasn’t actually Colbert’s fault, we totally understand why this memory still haunts him almost a decade later.