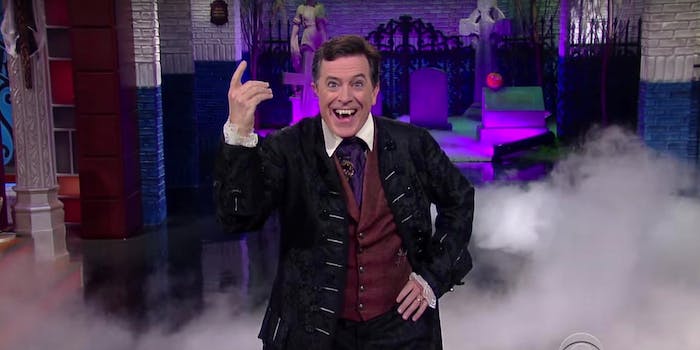 He's got the look down, but it's those teeth that really bite.

How well did Stephen Colbert pull off his “sexy teenage vampire” look for Halloween on The Late Show last night?

So well we’re no longer sure why Twilight wasn’t set in sunny Spain.

Colbert definitely had the fetchingly archaic look down, sporting Edward Cullen-esque pale makeup and the kind of 19th-century waistcoat of which Dracula would have approved.

But he got a little tongue-tied around his garish vampire teeth, which he joked made him sound less like a scary monster and more like a Barcelona hostel resident.

So what do you think? Did Stephen make the “hot teen vamp” short list, or should we leave him in his coffin next year?