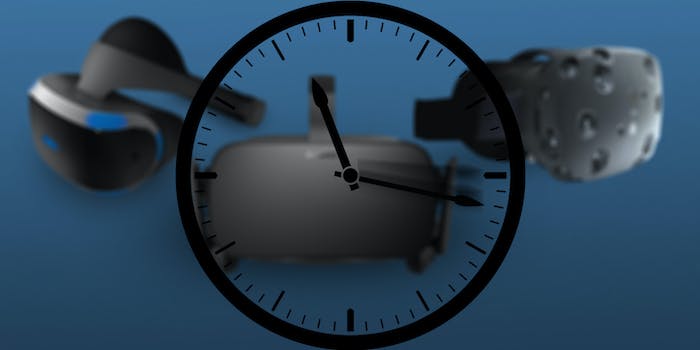 Valve announces the delay via promotion of a pair of game demos at PAX.

We officially and once again have no real idea when gaming virtual reality hardware will first be made readily available for anyone other than game developers.

Valve Software announced a pair of virtual reality game demos running at PAX Prime this weekend, on the Vive VR rig developed in partnership with Valve and HTC. Included in the announcement was the following note: “Later this year, HTC will offer the first commercial Vive units via a limited quantity of community and developer systems, with larger quantities shipping in calendar Q1 2016.”

We asked Valve for clarification, and “community” is meant to be synonymous with “consumer.” In other words, while a lucky few people who are not game developers may get their hands on a Vive in 2015 the effective release date in practical terms has been set back to next year, and the premiere of consumer VR has again returned to the nebulous realm of financial quarters.

The Oculus Rift will also be released in Q1 2016. The release date for Sony’s Project Morpheus virtual reality rig for the PlayStation 4 isn’t even that specific: sometime in 2016.

The old Fall 2015 release date for the Vive VR rig is front and center on the trailer for Phaser Lock Interactive’s flight traffic control management game Final Approach, one of the two virtual reality games being shown by Valve at PAX Prime.

The other Vive game being shown at PAX is Fantastic Contraption, originally released in 2008 as a Flash-based physics puzzle game, and now adapted by Northway Games and Radial Games for room-scale VR.

With the announcement of the delay for the release of the HTC Vive we return to a game of VR brinkmanship, waiting to see which of the three major systems releases first and, most importantly, sets the price point that the remaining two manufacturers will have to match or beat.

Photo via Maurizio Pesce/Flickr (CC BY 2.0) | Photo via Oculus | Photo via Sony/Playstation.com | Remix by Jason Reed and Fernando Alfonso III