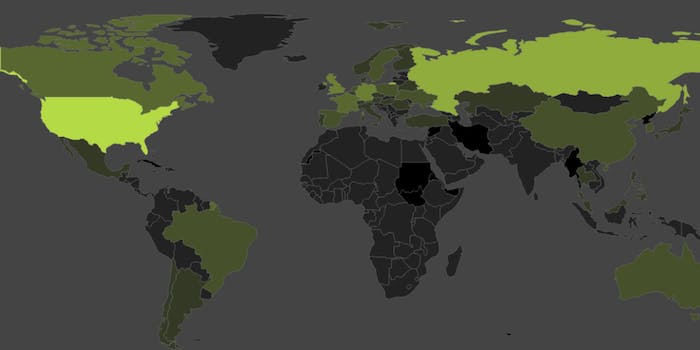 This map shows where the self-styled gaming elite call home.

Thanks to digital distribution giant Steam, we not only know where all the PC gamers live, but which of them have the best Internet.

It’s enough to fill a gamer with some serious pride or envy. PC gamers take gaming very seriously, in part because they spend thousands of dollars on their gaming rigs. They also spend a lot of time downloading games and other content from Steam, and the distribution service has added to its stat reporting the national average download rates for ISPs for PC gamers all around the world. An interactive version of the map is available on Steam’s website, but this will give you an idea where the competition stands.

You might not have known just how huge PC gaming is in Russia before looking at Steam’s data. The United States may account for more than double Russia’s traffic on Steam, but PC gaming doesn’t have nearly the national foothold or internal market share in the U.S. than it does in Russia.

Games market research company Newzoo published data in 2013 that showed 98 percent of all Russia’s 46.4 million gamers played on the PC platform. Russia has also historically been regarded as a hive for PC game piracy, with rates as high as 75 percent reported in some years.

Gabe Newell, co-founder and managing director at Steam’s parent company, Valve, made it sound easy to succeed in the Russian PC market at a Washington Technology Industry Association talk in 2011.

“The people who are telling you that Russians pirate everything are the people who wait six months to localize their product into Russia,” said Valve’s leader, known affectionately as just “Gabe” by the PC enthusiasts. “It doesn’t take much in terms of providing a better service to make pirates a non-issue.”

You can also view best performance by individual ISPs in the United States, sorted by number of bytes delivered to each network.

Once American PC gamers are finished arguing about whether they or Russia are actually the supreme PC gaming community, the Americans can argue among themselves as to which ISP is most egregiously offensive in terms of latency for first-person shooter matches and MMO play.

Gaming, after all, is serious business. PC gamers are just louder about stating the obvious.