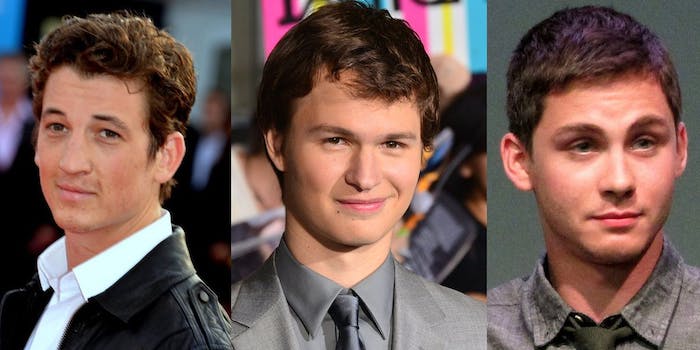 If this casting shortlist is real, it's a straight-up disaster.

In this troubled and conflicted world, there is one issue on which we can all agree: the reported casting shortlist for the young Han Solo movie is total garbage.

Ansel Elgort? Miles Teller? Dave Franco? Are we seriously meant to believe that someone from this bouquet of overcooked noodles is qualified to replace Harrison Ford?

The obvious answer is no. None of these dweebs are going to play Han Solo in Disney‘s 2018 Star Wars standalone film.

Casting this movie was always going to be an uphill battle. The role of Han Solo is inextricably linked with Harrison Ford, an actor who at 35 years old combined sex appeal, dorky immaturity, Humphrey Bogart-ish old-Hollywood charm, and a tiny hint of skeeziness. When you look at the biggest names on the shortlist reported by Variety…well. Let’s take a look.

Dave Franco is 5-foot-6 and already 30 years old. Teen drama stars Ansel Elgort and Logan Lerman both look as if Harrison Ford would shove them in their lockers and take their lunch money. Miles Teller is (and this is mean but true) not attractive enough, and he probably couldn’t handle the round-the-clock perkiness required for a Disney movie press tour. And there is no reliable evidence that Scott Eastwood is a good actor.

Further down the list, there are a few wild cards. Blake Jenner is a mystery, best known for winning a role on Glee through a reality-TV contest. Jack Raynor is an up-and-coming actor with side roles in Transformers 4 and Macbeth, and Emory Cohen has received good reviews for indie movies like Brooklyn. However, the shortlist generally feels like a nightmarish repeat of Shia Labeouf‘s role in the last Indiana Jones film.

The Force Awakens achieved colossal success with a completely unknown actress in the lead role, but it benefited from a huge amount of star power in the supporting cast. If Variety‘s list is accurate, Disney would appear be looking for a better-known actor to play Han Solo, which is unfortunate, because Hollywood’s current crop of young white men is clearly a barren wasteland. All of the established names—Gyllenhaal; Fassbender; Chrises Hemsworth, Pine, Evans, and Pratt—are too old and already busy with their own franchises, leaving us with only the Ansel Elgorts of the world.

If only Disney could just cast John Boyega as Han Solo in addition to Finn.