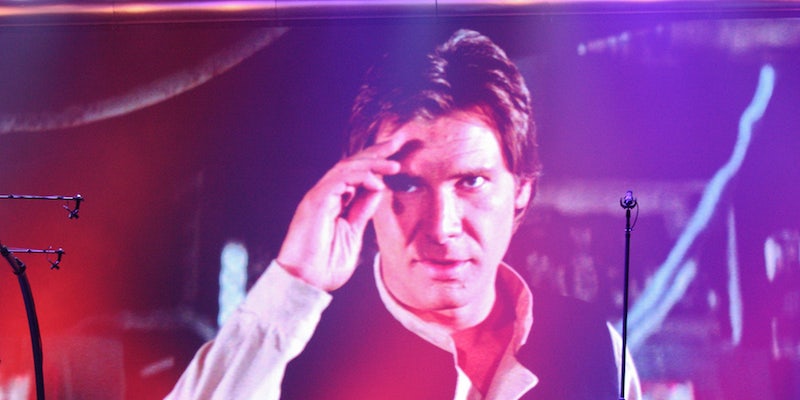 'This is a dream come true for us.'

Lucasfilm on Tuesday announced that its second standalone Star Wars movie will focus on the younger version of one of the saga’s most iconic characters.

Christopher Miller and Phil Lord (Cloudy with a Chance of Meatballs, The Lego Movie) will direct a movie about Han Solo‘s early life. It will be written by Lawrence Kasdan and Jon Kasdan and will be released on May 25, 2018.

“The story focuses on how young Han Solo became the smuggler, thief, and scoundrel whom Luke Skywalker and Obi-Wan Kenobi first encountered in the cantina at Mos Eisley,” Lucasfilm said in a statement posted on StarWars.com.

Lawrence Kasdan co-wrote The Empire Strikes Back and wrote Return of the Jedi, the latter two installments in the original Star Wars trilogy. He has served as a consultant on the first new Star Wars movie, The Force Awakens, which will be released on Dec. 18.

Lord and Miller made no secret of their excitement and their ambitions.

“We promise to take risks, to give the audience a fresh experience, and we pledge ourselves to be faithful stewards of these characters who mean so much to us,” the two said in Lucasfilm’s statement. “This is a dream come true for us. And not the kind of dream where you’re late for work and all your clothes are made of pudding, but the kind of dream where you get to make a film with some of the greatest characters ever, in a film franchise you’ve loved since before you can remember having dreams at all.”

Rumors of a Han Solo standalone film have circulated for years, with Entertainment Weekly reporting in February 2013 that Lucasfilm was doing both Han Solo and Boba Fett films. The Boba Fett project remains unconfirmed.

Based on Lord and Miller’s work on The Lego Movie, it seems as if their Han Solo project will adopt a lighter tone than the first Star Wars standalone film, Rogue One, which focuses on a daring rebel plot to steal the Death Star plans. Rogue One, Disney’s second Star Wars film, will be released in May. Episode VIII will be released in 2017, in between Rogue One and the Han Solo film.

Very excited. Celebrating by drinking fancy whiskey out of this cup: pic.twitter.com/RpJKzmW5Ns