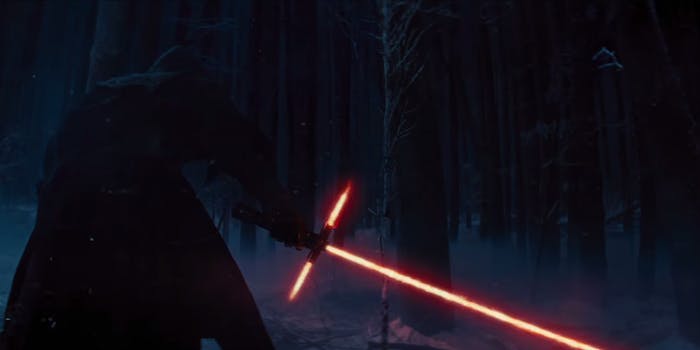 Surprisingly enough, it's not Benedict Cumberbatch.

The teaser for Star Wars: The Force Awakens has now been analyzed to within an inch of its life, but in the end we were left with more questions than answers. For one thing, who spoke the very brief dialogue in the trailer?

Although no one speaks onscreen, the trailer includes an ominous voice-over saying, “There has been an awakening. Have you felt it? The darkness… and the light.”

Since the movies is literally titled The Force Awakens, it’s easy enough to guess what this mysterious character is talking about. But his identity was much more mysterious, as was the identity of the actor playing him.

Many fans theorized that it might be Benedict Cumberbatch, whose dulcet tones have previously graced the trailers for Star Trek Into Darkness and the Hobbit movies, and who is persistently rumored to have a “secret” role in Star Wars. The fact that Cumberbatch has never been confirmed as a cast member did little to discourage these theories, right up until Good Morning America revealed that the voice actually belonged to Andy Serkis.

Serkis was already known to have a role in The Force Awakens, and his part in the trailer suggests that he may be some kind of villain. His tone of voice wasn’t exactly warm or friendly, and it’s easy to imagine that “darkness” line being spoken by a Sith Lord.

With Serkis best known for motion-capture performances such as Gollum in Lord of the Rings, many people already assume that he’ll be playing a non-human (perhaps even non-bipedal) character in Star Wars: The Force Awakens as well. However, speculation is all we have to go on for the moment. The movie doesn’t open until Dec. 18, 2015.