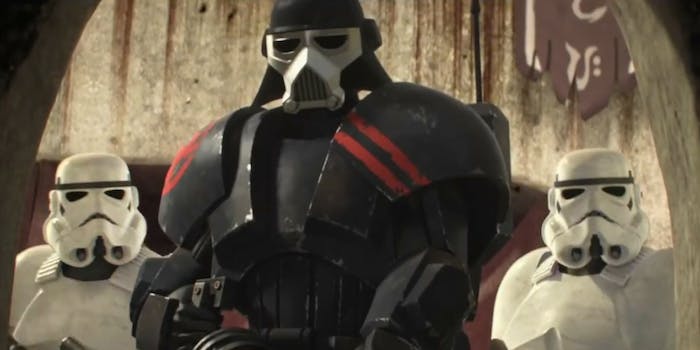 ‘Star Wars: Uprising’ will keep you playing even after it gets boring

You might want to see what happened after 'Return of the Jedi,' but each level will just be more of the same.

If you want to sew the seeds of rebellion in the new Star Wars: Uprising, make sure you have plenty of free time on your hands. It’s gonna take a while.

The new mobile Star Wars game is the first mobile game set between Return of the Jedi and The Force Awakens. It offers fans the briefest glimpse of the story right after Jedi, by showing you what one corner of the galaxy far, far away is going through. If you want to know what’s happening in the larger galaxy, however, that’s a bit more complicated.

The game, released this month, is set after the events in Return of the Jedi when the second Death Star has been destroyed and the Emperor is dead. It focuses on the region known as the Anoat Sector. The Imperial Governor of that sector is keeping news of the Rebel Alliance’s victory in the final Jedi battle from his citizens, instead telling them that the Rebels have been destroyed and the Emperor is still alive. This is where you as the player come in. It’s your goal to learn the truth and spread the message to the people. 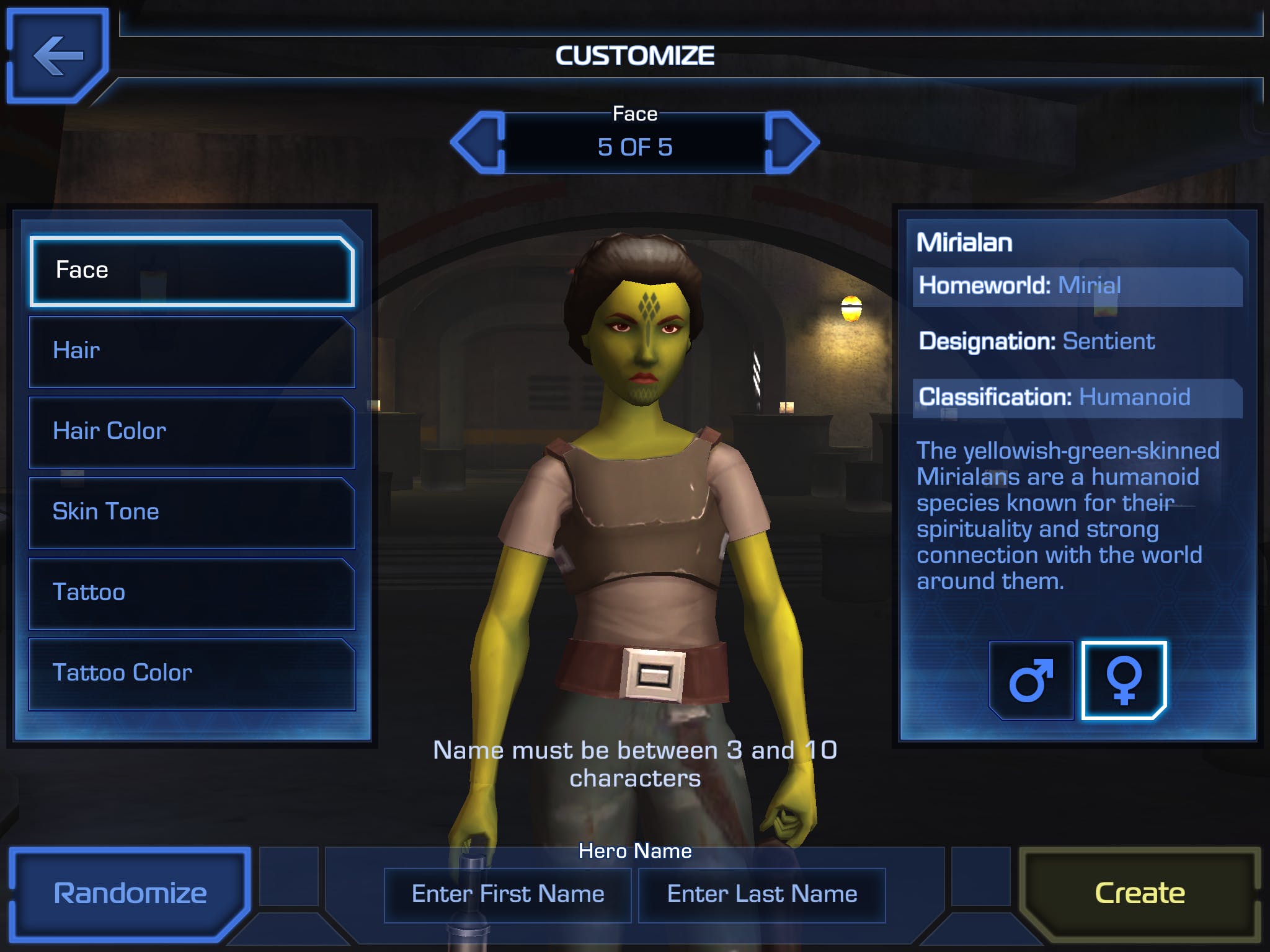 You always start out as a smuggler, working with your older sister Riley, who is a constant presence in the game, including while you’re on your missions. I liked the revelations about the main character’s family and past that these conversations reveal, and the way they provide additional level of motivation to your character’s actions. It’s a slow reveal, but it kept the characters interesting. 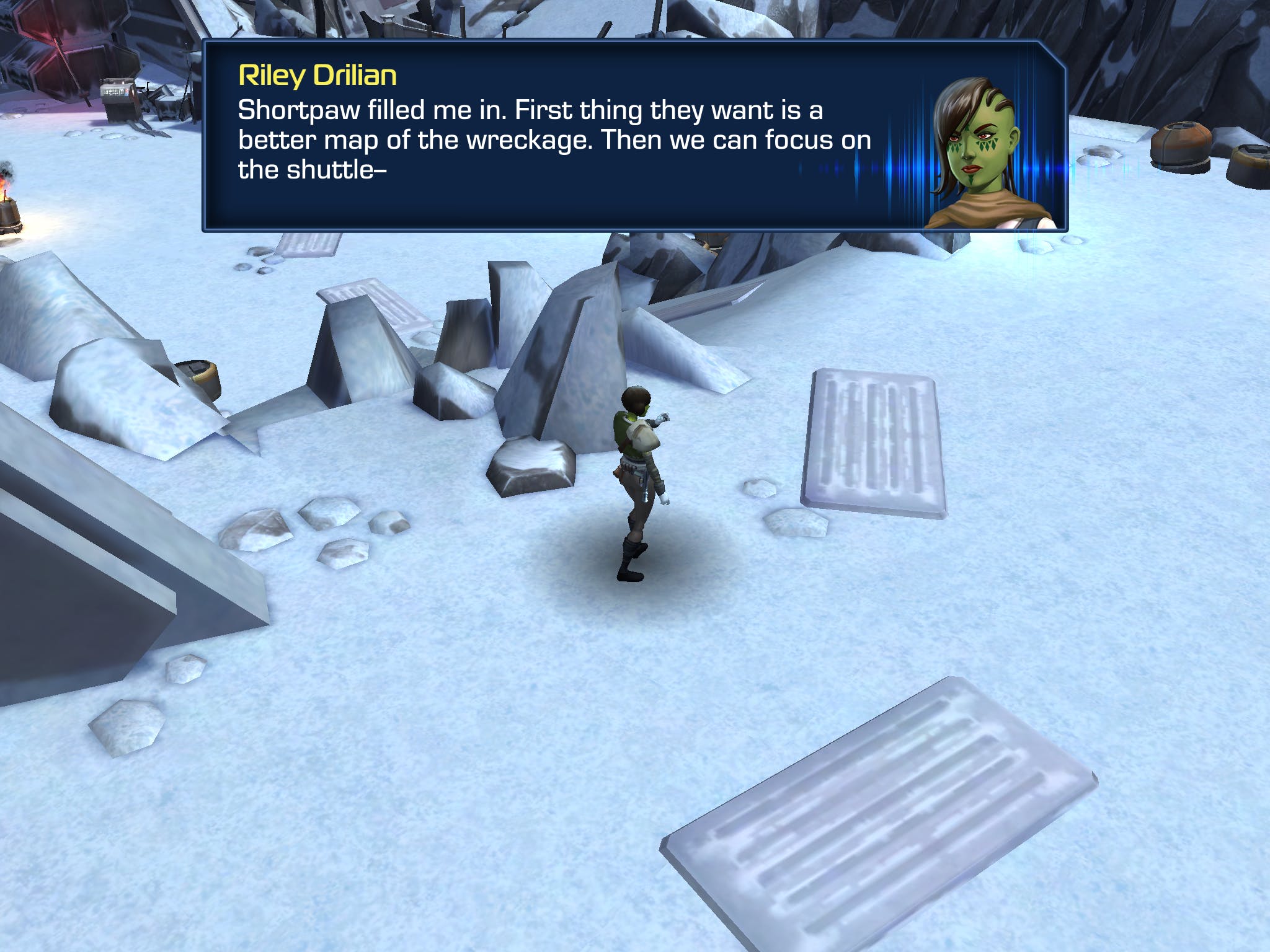 You and your sister end up involved with various organizations and eventually find yourself working to help break through the Imperial blockade set up by the Governor in an attempt to keep the truth about what happened to the Emperor from reaching the sector’s people. From there, you have to work with the groups to try to get around the blockade. It’s interesting, but any significant change is extremely slow to occur. If you want to spread the truth to the people and start seeding rebellion, it’s not going to happen up until level 20 at least, which is the level I’ve played up to so far.

This leads to the biggest problem with the game, in that every mission you embark on is extremely repetitive and doesn’t advance the story very much. There are a variety of missions you can take on, like story missions and daily credit missions. Multiplayer is an option, you can join cartels, and you can take part in sector battles. However, many of the missions that take place on the same planet look exactly the same. Moving to a new planet doesn’t lead to much difference either. You run around a familiar setting, kill some enemies, shoot some pots or crates to get credits, and then leave. After a while, no matter what the goal of the mission is, they’re not very exciting.

Often, they’re also not all that challenging. You get to choose the level of difficulty for each mission by choosing the reward level you want. The higher the difficulty, the better rewards you’ll receive. Each one will tell you whether your mission success is good or risky. In theory, the risky option should be harder for your character. I’ve always chosen it and never had any trouble completing a mission. 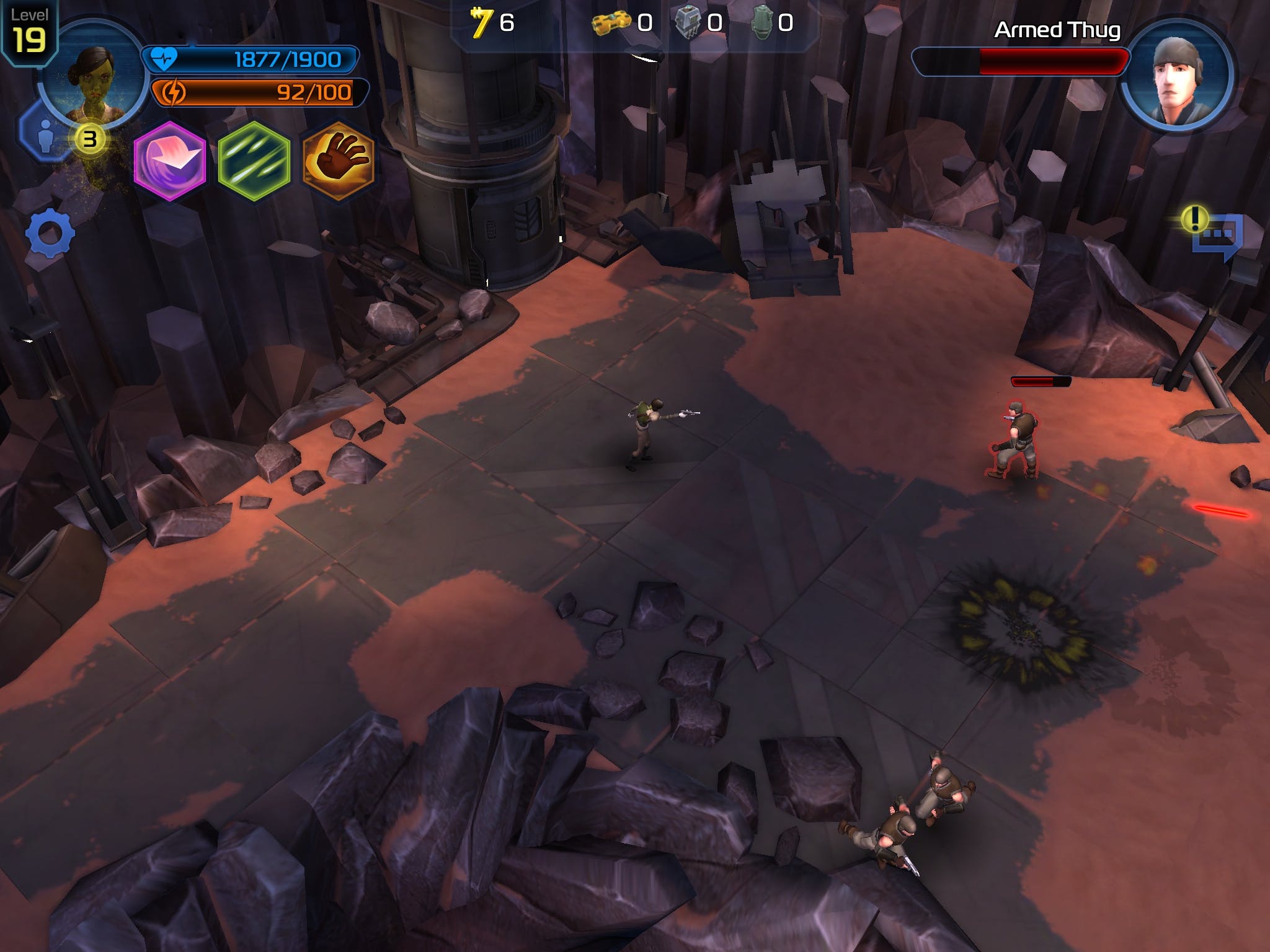 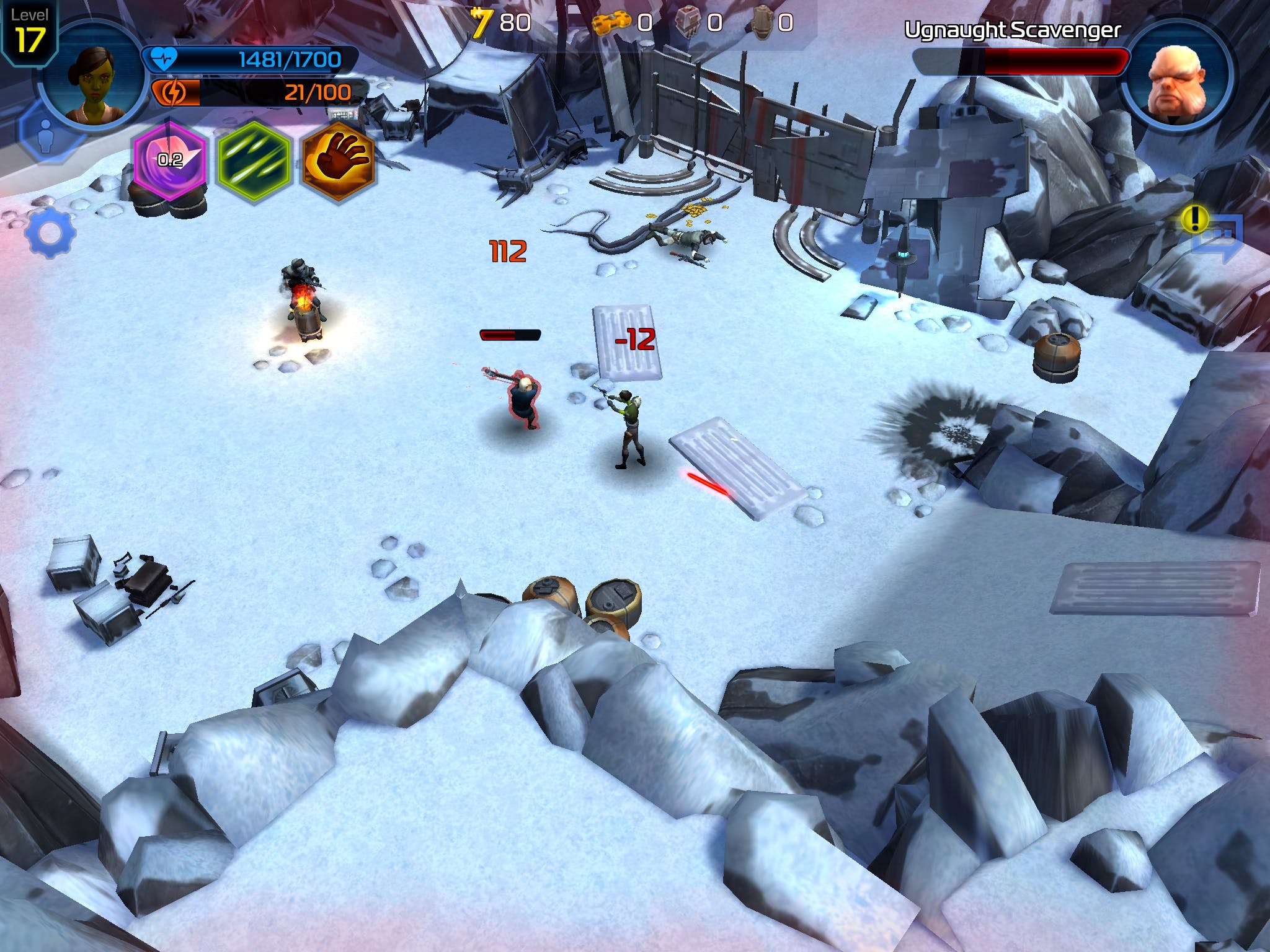 There are some fun aspects to the missions, though. For example, when you finally reach the familiar ice planet Hoth from The Empire Strikes Back, you’ll see remnants from the battle between the Empire and Rebellion, which is a nice touch. The gameplay is easy and addictive as well. You can easily just run through these missions to level up and get gear. You can also gain crew members along the way and send them on crew runs to gain credits, gear, and more. You can further customize your character’s abilities and choose classes as you progress through the game. In-game purchases are also an option, but they’re not necessary. 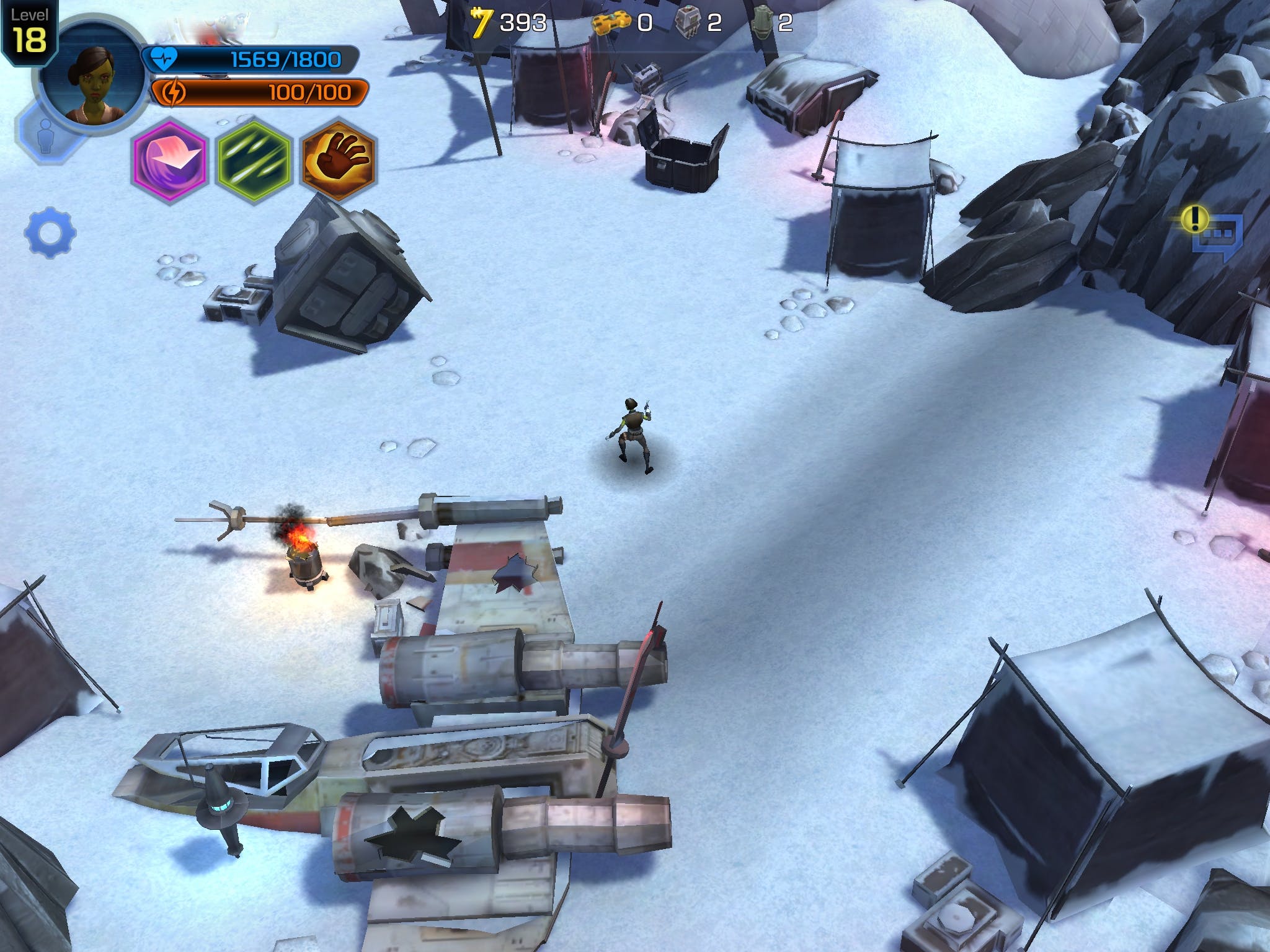 I played Uprising on iOS and so cannot speak to how it plays on Android devices, but for me on the iPad the game ran into a few difficulties as I played. It unfortunately crashed on me a number of times and the game did not always respond to my touch. It would freeze one minute and the next I’d be caught in my enemy’s’ fire as I furiously tapped the screen to try to move away.

The graphics are also decent. During conversations when you get close up to the characters, nothing was choppy and the design didn’t look bad for a mobile game. 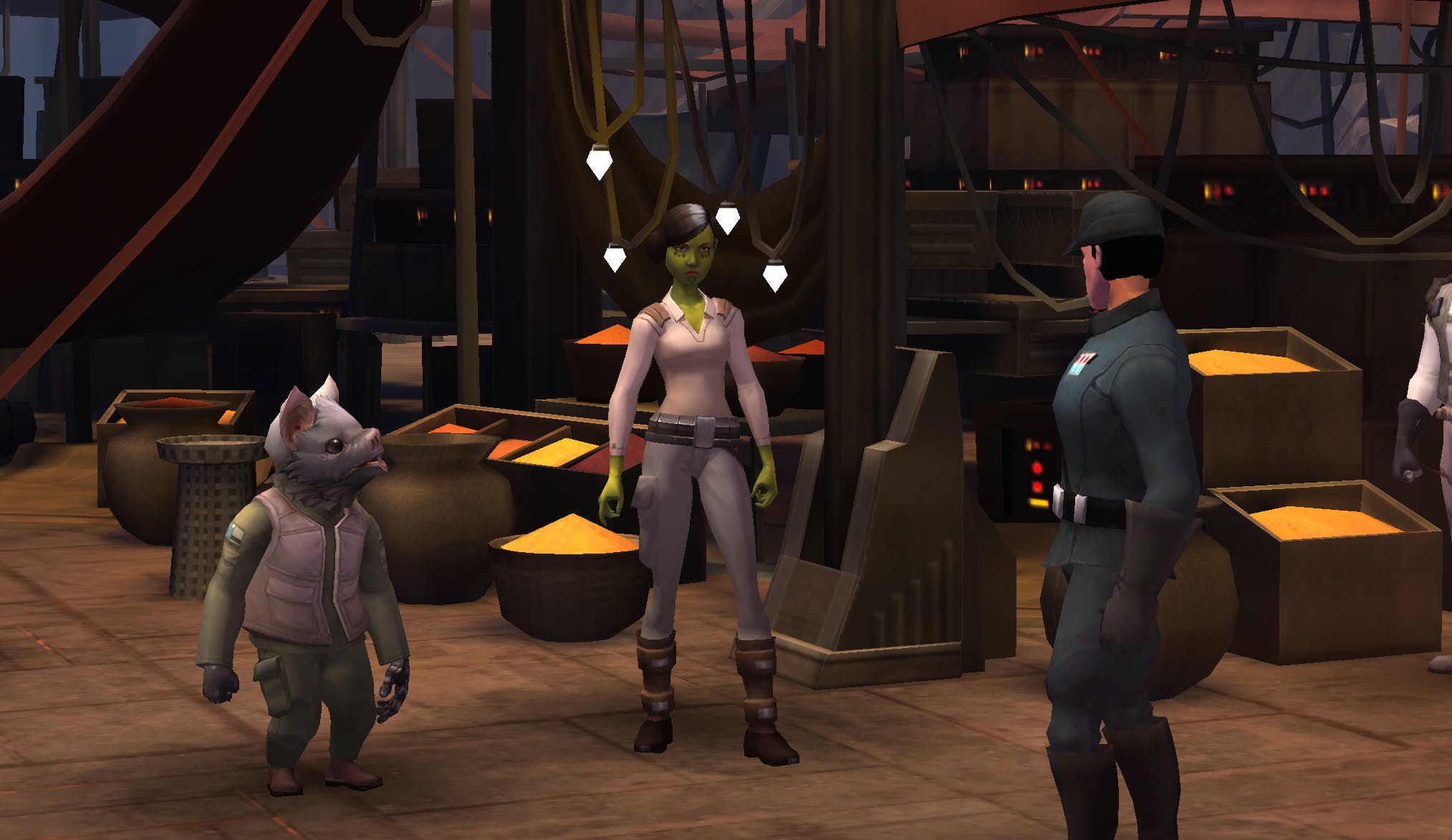 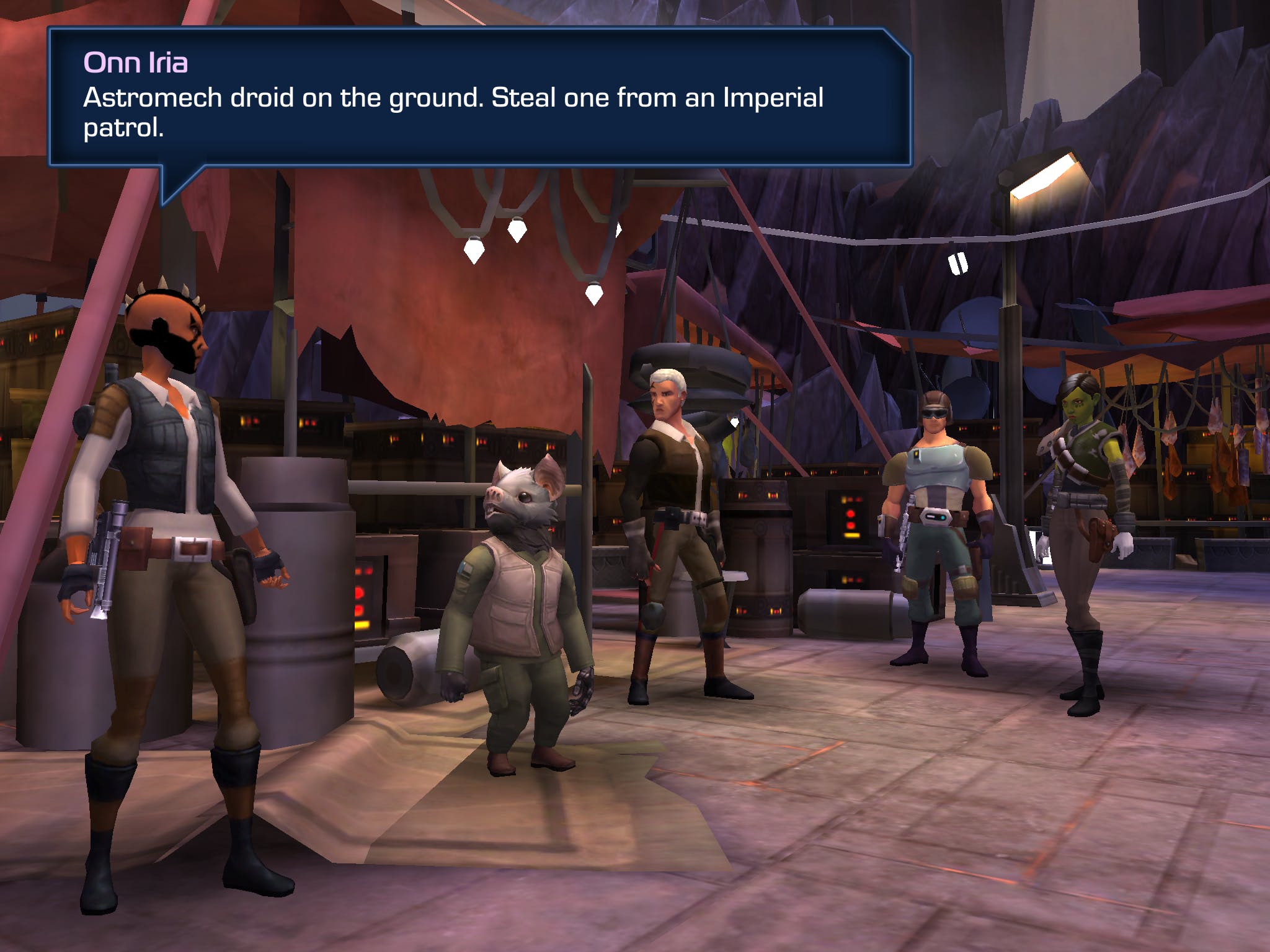 Uprising succeeds in putting gamers at an exciting point on the Star Wars timeline, and it’s easy to get attached to your character. However, it doesn’t offer much in the way of information about what’s happening in the galaxy at large, which might be a disappointment to fans who had hoped for more. Maybe that will change as we get closer to The Force Awakens—or perhaps once the player reaches a higher level—but it’s still a bit of a letdown, and it won’t help motivate fans who wanted more story to keep playing. Add in the repetitive missions, and even though it’s an interesting examination of this sector and how Imperial Governors across the galaxy may have reacted to the Emperor’s death, it’s easy for the game to get boring. Of course, the addictive nature of the gameplay, with its easy missions and leveling up, means you might find yourself continuing to play anyway.

Star Wars fans will probably enjoy the game as one that succeeds in transporting you to the universe; but how long you actually stay there will ultimately depend on how much of the same type of battles and environments you can stomach while the story crawls along at a Hutt’s pace. In the end, your participation in this Uprising will depend on what you’re looking for from the game.

Star Wars: Uprising is currently available for download from the Apple Store and Google Play.