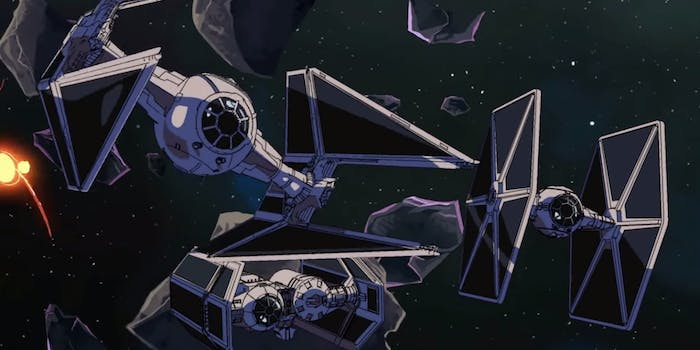 This is what space combat looks like from the point of view of an Imperial pilot.

The Rebel Alliance is in serious trouble in a fan-made, anime-style Star Wars short that is part action movie and part homage to the video game TIE Fighter.

You don’t need to be a gamer to appreciate this fan short, which was drawn and animated by Paul Johnson over the course of four years. The production values are great, the sound design is spot-on, and the short pulls no punches when it comes to the brutal nature of space combat.

If you are a fan of TIE Fighter, you will appreciate all the little details pulled right out of the game. The opening credit design, the ships’ cockpit instrumentation, the Star Destroyer briefing room, the Imperial pilots’ tactical displays, and even some of the spacecraft unique to the game are all in the short—and they’re reproduced perfectly.

Taking on the role of an Imperial starfighter pilot in TIE Fighter, which was released in 1994, was an awesome role-reversal after Star Wars fans had their first chance to fly for the rebellion in the preceding starfighter sim, X-Wing (released in 1993). This short shows the depth that Star Wars video games added to the universe and helps explain why gamers fell so hard in love with TIE Fighter. The game was released 21 years ago, but fans are still celebrating it.

Remastered versions of X-Wing and TIE Fighter for modern PCs were re-released on GoG.com in October. Check out our guide to mapping modern control pads onto two of the best starfighter sims ever.