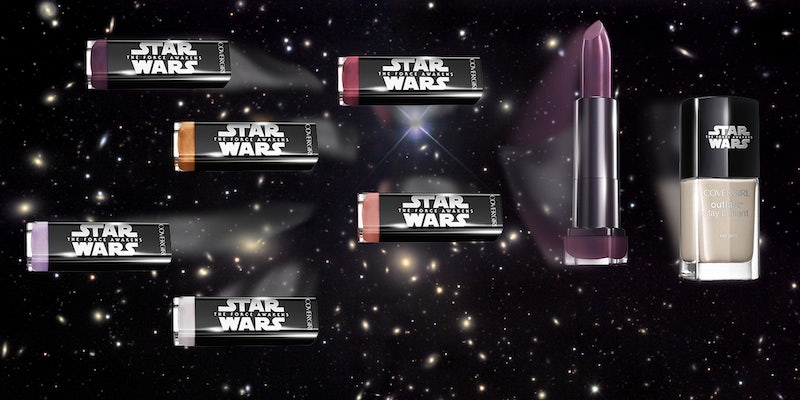 Join the #BeautyForce with these products and makeup tutorials.

In September, the Force will be strong in the cosmetics department thanks to a new CoverGirl makeup collection inspired by Star Wars: The Force Awakens. Announced Thursday, the limited-edition line will include items for any Jedi or Sith that wants to display their allegiance to the light or dark sides of the Force.

The collection will include six new lipstick shades from shimmery gold to dark purple, as well as nail glosses with names like Speed of Light and Red Revenge. Also included are two super-size waterproof mascaras, one for the light side and one for the dark side, and 10 regular mascaras each with a Star Wars quote on them from classic “You’re my only hope” to new “There has been an awakening.”

In a galaxy far, far away @[email protected] have partnered on beauty looks created by @patmcgrathreal and limited-edition makeup inspired by #StarWars #TheForceAwakens. It’s a #beautyforce like never before, channeling the duality that is within us all. #LightSide, #DarkSide—which will you unleash today? #droid #stormtrooper

The metallic lipsticks and nail polishes in particular stand out, but it’s disappointing that there aren’t some more creative shades here or an eyeshadow palette. The fact that a Star Wars line was released at all, though, is a sign that Lucasfilm and Disney aren’t forgetting about the geek girls eagerly awaiting their film’s release—and the line is certainly making waves in the geek community. Both geek fashion professionals and fans seem happy with the collaboration.

Costume designer Tara Reich, who recently participated in the San Diego Comic-Con Her Universe Fashion Show with a Death Star-inspired outfit, told the Daily Dot via email that she is excited about the makeup line.

“[I’m] really excited about the different colors that they are using which will be great for costuming and day to day. It will be interesting to see how it sells but I can’t imagine it not being really popular. I think this is what most geeky girls have wanted for a long time,” Reich said.

WeLoveFine designer Catherine Elhoffer thinks the collection is great for how it blends nerdy with chic, and she likes that the affordability of CoverGirl will make this line accessible to everyone. While she loves some aspects and finds others lacking in the line, overall she thinks it’s “ just another in the awesome strides geek fashion has made in the past few years.”

“As bigger companies start to embrace licenses like Star Wars and put it onto their product, it becomes even more accepted into everyday lives. And it becomes more affordable with the economies of scale,” Elhoffer told the Daily Dot in an email. “It’s cheaper for CoverGirl to make this makeup line than an indie makeup company, as they already have so much lined up in their supply chain, so they can pass that savings on to the consumer. So now younger fans to Star Wars can grab this makeup with their weekly allowance and start sharing their love of that fandom with their friends more easily. Or all of the kids in my generation who graduated college with massive student debts and anemic salary offerings can grab a few pieces and still pay rent.”

The collection will be available Sept. 4. You can watch an unboxing of the collection shared by Allure Friday below!