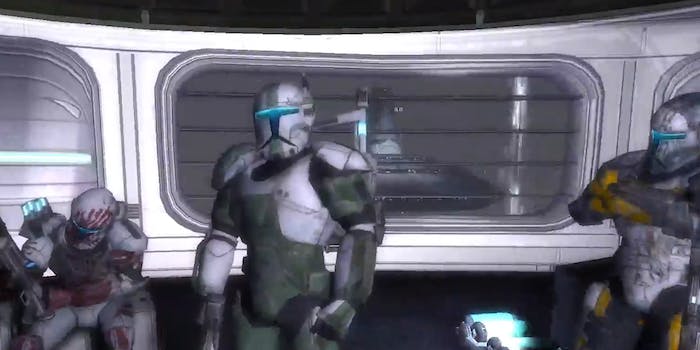 The game's lead programmer offers fans a look inside the development of a classic Star Wars video game.

When Star Wars: Republic Commando was released a decade ago, it offered fans the chance to take on the role of a clone commando leading the elite Delta Squad. After all these years, the first-person shooter, which took place between Attack of the Clones and Revenge of the Sith, remains an addictive, thoroughly enjoyable entry in the world of Star Wars video games.

Now fans can get some insight into how Republic Commando was developed thanks to lead programmer Brett Douville.

This week, Douville released the first part of an oral-history playthrough of Republic Commando on his YouTube channel. As he plays the game, he offers commentary on the experience and the development work that made it possible. Republic Commando was the last game Douville worked on at LucasArts.

“I’m really proud with what we accomplished with this game,” Douville writes in the video description, “especially considering some of the stuff that happened towards the end—which I’ll describe in a future video.”

Douville offers some fascinating insights into the game’s development as he plays, including the fact that the original concept was for the game to take place during the Battle of Geonosis (which was featured in Attack of the Clones as the beginning of the Clone Wars).

The playthrough lasts for roughly an hour and a half, but Douville will be back next week to continue the series. He will be streaming live on Tuesdays through his Twitch account and will try to answer questions from the YouTube video’s comments. You can also watch for updates on his Twitter feed.