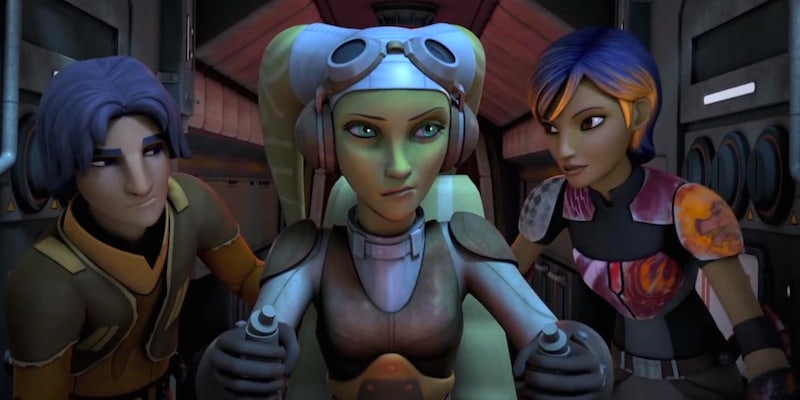 The women characters have a strong presence on screen, but that's not reflected in the merchandise.

From Gamora’s absence on Guardians of the Galaxy products to Princess Leia being left off of the initial wave of Star Wars items in Disney Stores, over the last year there have been multiple examples of women who are integral team members in popular franchises getting ignored on related merchandise.

It’s frustrating for fans of all ages, but is especially hard for kids and their parents who want merchandise featuring these characters. Sometimes fellow fans step up to fill the gap, but customers are often left with only what’s available in stores.

The latest case of women being left off merchandise has impacted Catherine Basil and her family. Her 7-year-old daughter Olivia has been a fan of Star Wars since she was 4 and loves the new animated TV show Star Wars Rebels.

“I love watching Rebels with my family—I can’t wait for a new one to come out. My favorite characters are Ezra, Sabine, Kanan and Hera. Sabine is super cool—I love how she does art just like me and is also really smart—she knows how to explode things—like when she made the fireworks go off on Empire Day and distracted the Imperials!” Olivia told the Daily Dot. 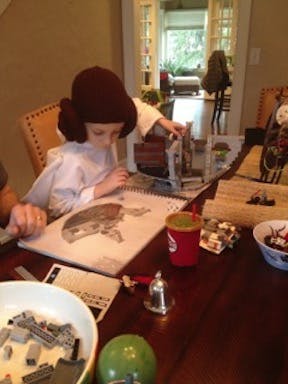 The two main women on the show, Hera Syndulla and Sabine Wren, are integral members of the rebel team and are portrayed as strong equals next to men they work with. The representation of Hera and Sabine and their potential as role models for young girls is something the voice actors behind each character are particularly proud of, and the show has been praised for how it passes the Bechdel test. While there were concerns about the two women taking a back seat when they were announced last in marketing before the premiere and left out of the first wave of action figures, seeing the positive portrayals on the actual show made many hopeful. However, the women of Rebels are a rare sight on any of the show’s merchandise. Both Hera and Sabine are often left out of team imagery, and finding a product focusing on just one of them is quite rare, as is finding any products in the girls section of stores.

Catherine faced the problem when she went to the Disney Store to buy Star Wars products for her kids. She went to the Star Wars section—always located on the boys side—and was thrilled to discover a set of Rebels pajamas until she realized Hera and Sabine were not displayed with their fellow team members. 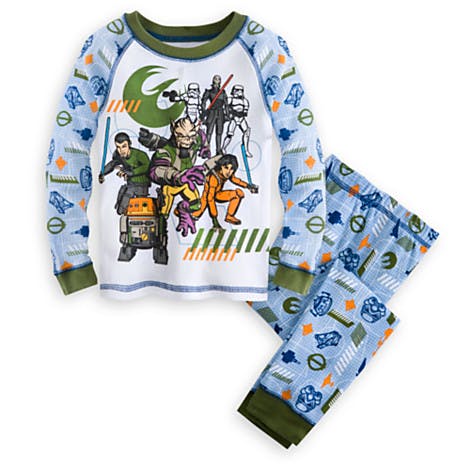 This is one of many products leaving off the two women. Examining products in a Disney Store at a mall in the New York suburbs, I discovered the same lack of products displaying the whole team. The store had a backpack showing everyone except Hera, a lunch bag with the whole team, a T-shirt with Ezra, Chopper, the Inquisitor, and a stormtrooper, and the above set of pajamas. On the Disney Store website the Star Wars section, listed under boys, includes more than 20 Rebels products but Hera only appears on three and Sabine on six, with both appearing together on only three items—the only items with Hera. This doesn’t include the options Disney gives as part of their personalized store though. Under the create your own Rebels products options, Hera and Sabine each get their own icon art and Sabine also gets helmet and character art options, as well as an appearance in art with Ezra and Chopper. The whole team is never seen together.

Catherine finds seeing these characters left off merchandise insulting, since they have such big roles on the team.

“If the characters are good enough to be in the show, why are they not good enough to be on clothing items?” she told the Daily Dot. “It’s preposterous and the only reason I can think of, is that the marketers believe sales will be hurt by including the females. As the mom of a son, I find that insulting too. He loves his sister and sees her as a creative, interesting, brave girl.”

While often both characters have been left off products, Hera appears much less than Sabine. Comic Book Resources writer Amy Ratcliffe and staff writer for Star Wars fan site Tosche Station Bria LaVorgna have both documented the specific lack of Hera on merchandise amid the larger problem at the Disney Store and other retailers selling Rebels products. The problem is not just in Disney Stores. For example, Her Universe’s Rebels shirts focus on Sabine and among Kohl’s more than 30 Rebels products online Sabine appears on five items while Hera is present in only two. 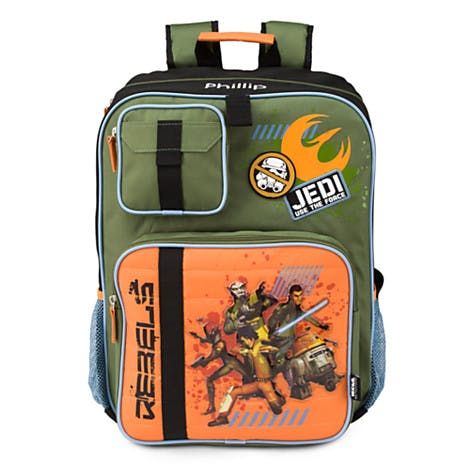 Just like social media campaigns sprang up with Princess Leia and Gamora, fans have taken to Twitter and Instagram to share their thoughts on this problem and continue to share the merchandise they find that leaves off the female members of the Rebels team with the hashtags #WheresSabine and #WheresHera.

Found some #StarWarsRebels valentines at @Target today, and predictably SOMEONE is missing. #WheresHera @starwars pic.twitter.com/zsjpGdydZw

Someone start a twitter that catalogs all available merch with Hera and/or Sabine. #WheresHera #WheresSabine

i went to buy Star Wars Rebels fabric for my daughter, but her favorite character was not there. No Hera, no sale. #WheresHera

On Tuesday the lack of action figures returned to the spotlight during a Q&A session at the New York Toy Fair. Star Wars collectibles fan website Jedi Temple Archives brought up the topic of female figures to Harbro, mentioning Rebels.

Q: Where are the action figures for the female characters from Rebels, like Hera, Sabine, or Maketh Tua? Male characters like Ezra and Kanan have been released multiple times already in many formats and scales, yet the best we’ve seen on shelves so far is a single Sabine with a non-removable helmet and a yet-to-be-released Hera, both of whom are packed with re-released Stormtroopers. Female characters have always played an integral role in the Star Wars saga, from Leia in the original trilogy to Padme in the prequels to Ahsoka and Asaaj in The Clone Wars and have always been among the first characters released in figure form, yet for this new chapter in the Saga, they’ve barely been a blip on the radar.
A: Hasbro feels they have released plenty of female characters in the line.

When asked about Princess Leia figures in another question, Hasbro said “there are no more Leias planned at the moment.” While the company may feel it has released enough female figures, fans who see a lack of women when compared to male figures disagree.

@HasbroNews The only female figure at my Target? Slave Leia. @starwars fans, please join me in saying #DOBETTERHASBRO pic.twitter.com/Ikv06Cn5nV

Hasbro later asked to have its answer on the website changed to the following:

A: Hasbro actually has some great new characters from Rebels hitting shelves now such as Sabine and Hera and have recently been releasing more females within our Black Series and Saga Legends line such as Mara Jade, Toryn Farr, Bastila Shan, Luminara Unduli, Padma Amidala (Geonosis), and a number of great Leia’s such as Ep IV, Endor, and the awesome Boushh disguise that was revealed at NYCC. (Editor’s Note: Hasbro has asked to have this answer revised.)

The absence of Star Wars products featuring female characters and merchandise geared toward girls is something Catherine discusses with her daughter. Olivia hasn’t been teased for her love of Star Wars, but she has been told by some other girls that it’s for boys. For the most part though, she only sees a clear gender divide when it comes to what’s in stores.

“I told her that I tried to buy the Rebels PJs, but that since the girls [Hera and Sabine] weren’t included, I didn’t buy them. After I explained it to her, she said ‘That’s ridiculous! What a bunch of dummies!’ and she meant the makers of the clothing lines,” Catherine said. “She gets mad and she just doesn’t understand why companies over-simplify girls. She’s always saying things like ‘some girls like ‘boy’ things and some boys like ‘girl’ things, it doesn’t matter!’”

Olivia is surely not the only little girl feeling this way, and after so many voices have been raised decrying Disney’s continued gender-marketing one can only hope that soon the company will take notice. Catherine and Olivia’s story shows how Disney’s marketing is directly impacting girls and frustrating parents as the company sends the message that girls take a back seat when it leaves off female characters and puts the majority of products in the boys section. 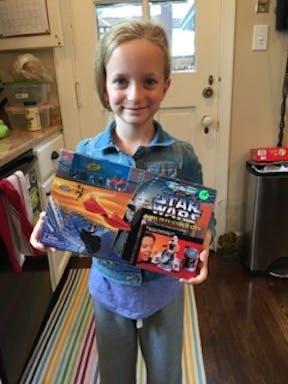 Olivia at age 7 with a vintage Boba Fett playset she was excited to discover at a toy show.

“Star Wars is a classic good-versus-evil story and in both the old and new trilogies, a woman plays a pivotal role. I think it’s a story for all people, not just boys. It’s particularly frustrating to see toys in any format labeled as ‘boys’ vs. ‘girls.’ Good stories and creative toys are for any kid,” Catherine said. “Disney is just perpetuating existing gender stereotypes and keeping boys and girls firmly in those boxes. They should be leading the way, not stuck in the past.”

If Catherine could talk directly to those in charge at Disney and Lucasfilm she would tell them “that girls and boys need positive role models that are both men and women.”

“History does not have to dictate the choices our children have going forward. If you’re going to create a show with female characters, don’t just pay them lip service, embrace what you’ve created—heroes for our children to look up to. Girls are smart and so much more marketing savvy than decades ago. The same girls that you alienate today will turn to other brands and other stories in the future. They will see that you neglect them or insult them and they will find other sources that don’t. Maybe not at 7 years old, but maybe at 12 and most definitely at 16. It’s smart business to include them and it’s just the right thing to do.”

The Disney Store did not respond to requests for comment by the time of publication.