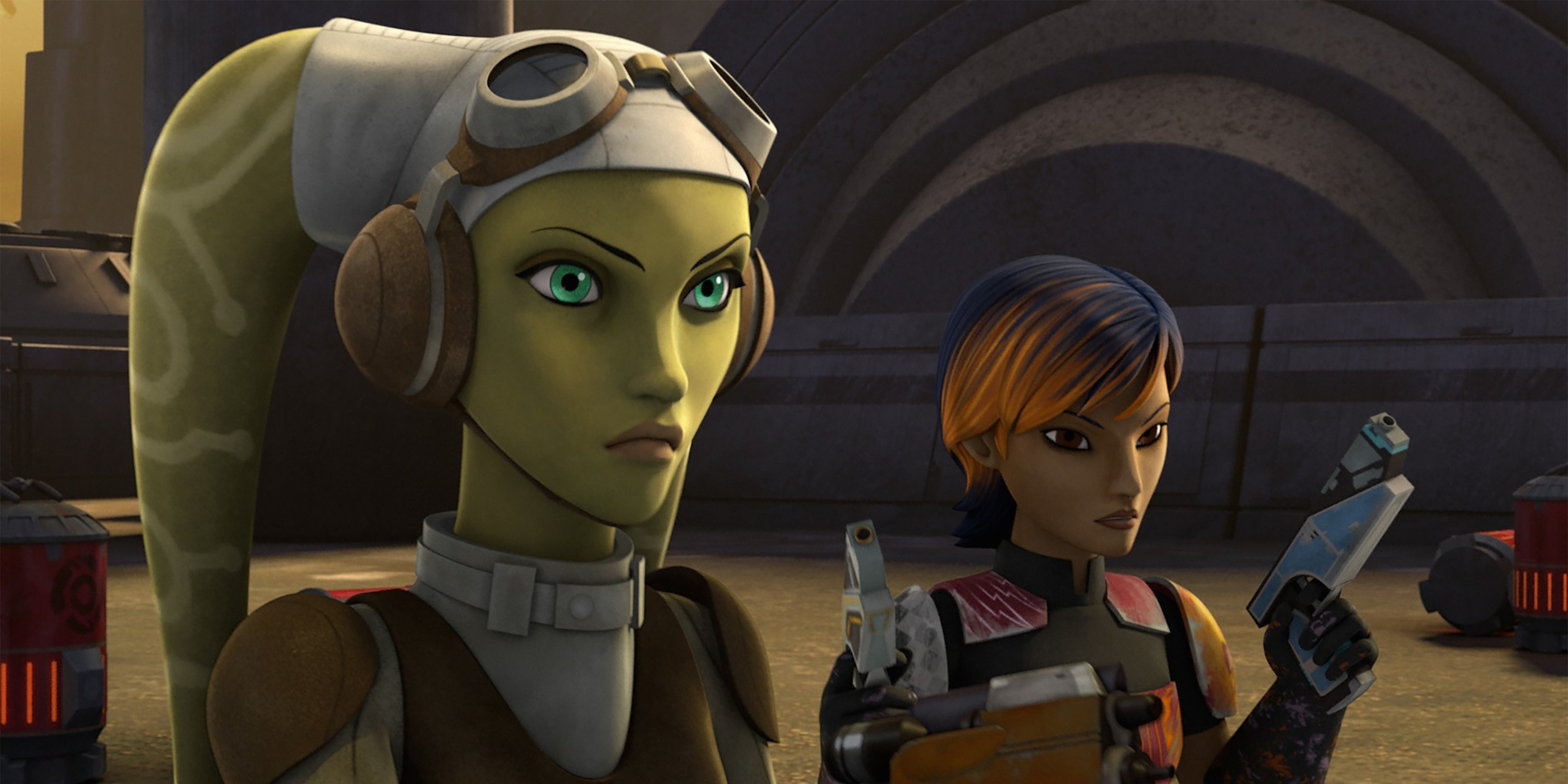 Meet the dynamic team of women behind ‘Star Wars Rebels’

Star Wars fans may have to wait until next year before The Force Awakens arrives on the big screen, but we got a peek at what Disney has in mind for the franchise when Star Wars Rebels premiered on Disney XD this fall.

Anticipation for the new animated series was high following the cancellation of the adored Cartoon Network’s Star Wars: The Clone Wars after Disney acquired Lucasfilm. One of the most-loved aspects of the show was its portrayal of strong women, from familiar movie characters like Padmé Amidala to brand new faces like Anakin Skywalker’s padawan Ahsoka Tano.

Following such fan-favorite characters could be daunting, but there’s clearly no one more up to the task than Star Wars Rebels actresses Vanessa Marshall and Tiya Sircar. Both first became involved in the series by auditioning for what they thought was a new Disney animated series called Wolf—a codename hiding the fact that it was Rebels.

“I didn’t find out it was Star Wars until I actually got the first call saying ‘Hey, you got that job and by the way, that job was Star Wars.’ I was very excited at the time!” Sircar told the Daily Dot.

Marshall said when she received the Wolf script she “felt like the Force was on the page” but her friends told her she was crazy.

“I also thought I would never be so lucky, but I recorded the audition, I sent it in. When I went to the callback over at Disney I saw a picture of a Twi’lek on the wall at which point I realized that my notions were correct for once,” Marshall told the Daily Dot. “I see Star Wars everywhere, but I went back and I saved the gate pass that day. I was so honored to have been called back and then when I got the call that I actually booked the part I hyperventilated. I think I fell to my knees and I wept, honestly.”

Marshall’s been a big fan of the franchise her whole life.

“I have such a reverence for all that George Lucas has done and I’m so excited to be a part of this next version of the Star Wars saga. I’m just beyond thrilled,” she said. 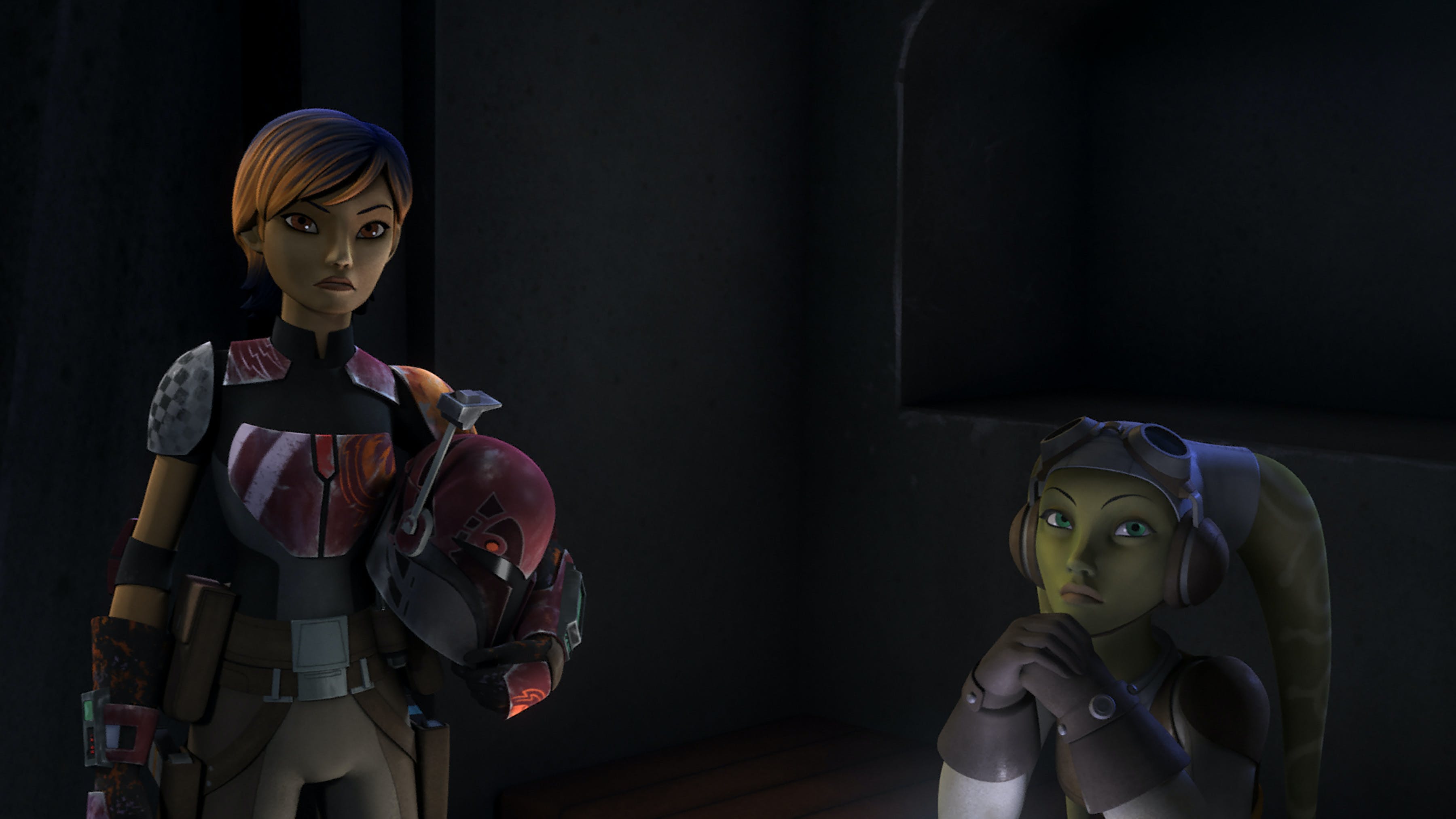 In Rebels, Marshall voices ace pilot Twi’lek Hera Syndulla, who owns the starship Ghost on which the rebel team lives. Marshall is impressed not only with her character’s flying skills but her ability to take care of herself on land and in the air. She’s a leader who balances these skills with what Marshall describes as “a kind of compassion and a sense of nurturing for the group that softens what might make her sort of a harder-edge character.”

“She definitely has all the moxy and quippy remarks of Princess Leia and perhaps the flying skills of Han but what’s interesting I think is her ability to lead quietly, to focus on the task at hand, [and] to draw out sort of the best elements of everyone in her crew, quietly to help them discover parts of themselves that they didn’t even know they had,” she explained.

Hera’s dynamic with each of the team members differs. Marshall believes she’s like a mother figure to alien rebel Zeb, young Jedi padawan Ezra, and even their grumpy droid Chopper. She’s more of a colleague and co-leader of the team with Jedi Kanan, who she may defer to at times due to his rather helpful Force abilities. There’s no hierarchy within the team according to Marshall, who points out that it’s all about surviving and continuing to help others. Hera acts as kind of the glue that holds the rest of the crew together. 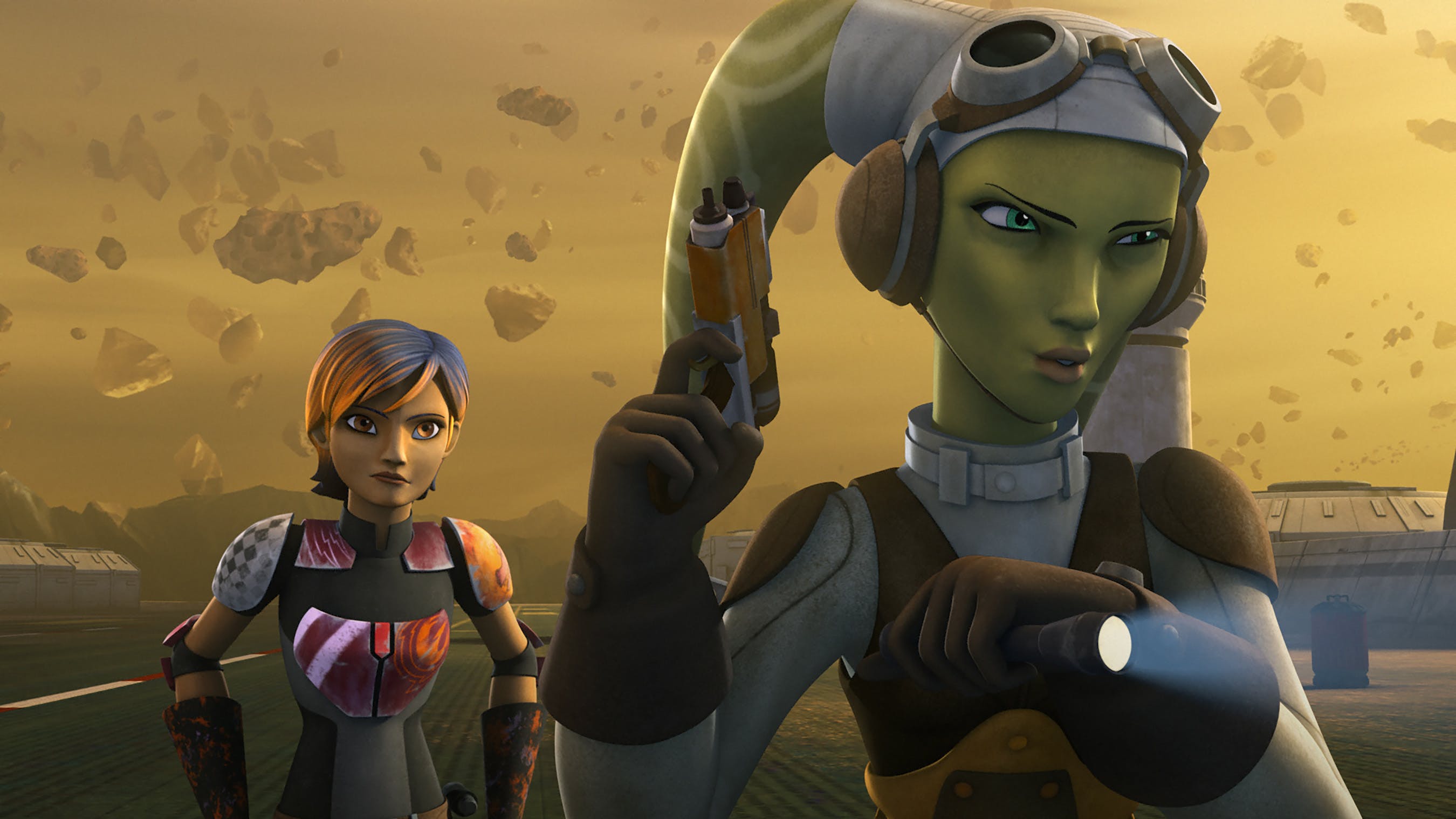 Hera acts as more of a mentor to the younger character Sabine Wren, voiced by Sircar. The teenage Sabine is a Mandalorian explosives expert and graffiti artist who once attended the Imperial Academy. Sircar describes Sabine as “a very complex multifaceted character” who is very much a warrior as most people think of Mandalorians as being. But in addition to enjoying blowing things up, she has an artistic side that she incorporates into her rebel activities. It’s a side that Sircar finds “intriguing and compelling.”

“She’s blowing up the Empire, attacking the Empire with explosives, and yet the explosions themselves are beautiful and aesthetically they’re really creative so it’s funny how she’s able to meld those two sides of her,” Sircar said.

When it comes to the dynamic of the team, Sircar also sees the characters as taking on some familial roles, with Hera as a mother figure, Kanan as a father or older brother figure, Zeb as the kooky cousin, and Ezra as the little kid. When it comes to Hera, Sabine totally trusts her, and the pair of women have a wonderful relationship.

“Out of Darkness,” the fifth episode of the first season, highlights this relationship. It focuses on Hera and Sabine going on a mission together and Sabine’s desire to be included more in the decisions Hera is making in their rebel activities. Sircar said she loved this episode and that the women are capable, smart, fearless, and out kicking butt right along with the guys.

To Sircar, Sabine’s questioning of the bigger picture and what the rebel team is doing in this episode is not about questioning Hera, but about wanting to be trusted by both Hera and Kanan to the point that she’s included in their plans. She described the bond between Sabine and Hera as the characters having each other’s backs with no animosity between them. To Marshall, Hera realizes that Sabine’s reticence “may come from whatever may have happened to her in her Imperial schooling.”

“Hera’s very sensitive to whatever injuries [Sabine] may have suffered in the past, but they manage to have a very direct, loving relationship despite all the violence and high stakes around them,” she said.

Sircar thinks that her and Marshall have actually assumed similar roles to their characters in real life as well.

“Whatever place Sabine occupies, I kind of occupy the same space and so does Vanessa. She is like this maternal figure,” Sircar explained. “She’s always making sure ‘Are we hungry? Do we need a snack? Am I cold? Do I want to borrow her cardigan?’ She is that person and she’s also a seasoned vet—this prolific voiceover artist—so I also look to her in that respect. She’s more experienced than me, so it is a little bit like life imitating art imitating life. I think we have a lovely relationship in real life and we have forged a pretty close bond, which is echoed in Sabine and Hera’s relationship.”

The portrayal of Hera and Sabine in this first half of the season has shown that these characters are on equal footing with their fellow male members of the team. How they might be portrayed in the show was initially a concern among fans due to how the women of Rebels were treated in the marketing leading up to the series. Not only were Hera and Sabine the last character trailers revealed, but both were also left out of Hasbro’s first wave of Rebels action figures. Now their action figures are on the way, and what we’ve seen in the show so far has shown Hera and Sabine will not be taking a back seat in Rebels adventures. It’s yet another example of how there can be a disconnect between great stories and the marketing for them.

Sircar is glad that the show has proven these concerns not to be the case. She said she feels privileged to play a teenage female character who is intelligent, strong willed, and not concerned with superficial stuff. Marshall thinks that Hera is a great, strong female role-model and is also thrilled with Sabine’s portrayal as a Mandalorian expressing herself and being empowered by her creativity.

“I think it’s really important for young girls to express themselves in a similar way. Not necessarily in a rebellious way, but to stand up for what’s right and that obviously women can be experts in all areas. I think that Sabine manages to demonstrate those things without commenting on it. It just is what it is,” Marshall said. “She handles the munitions and we don’t discuss her gender. It’s got nothing to do with anything.” 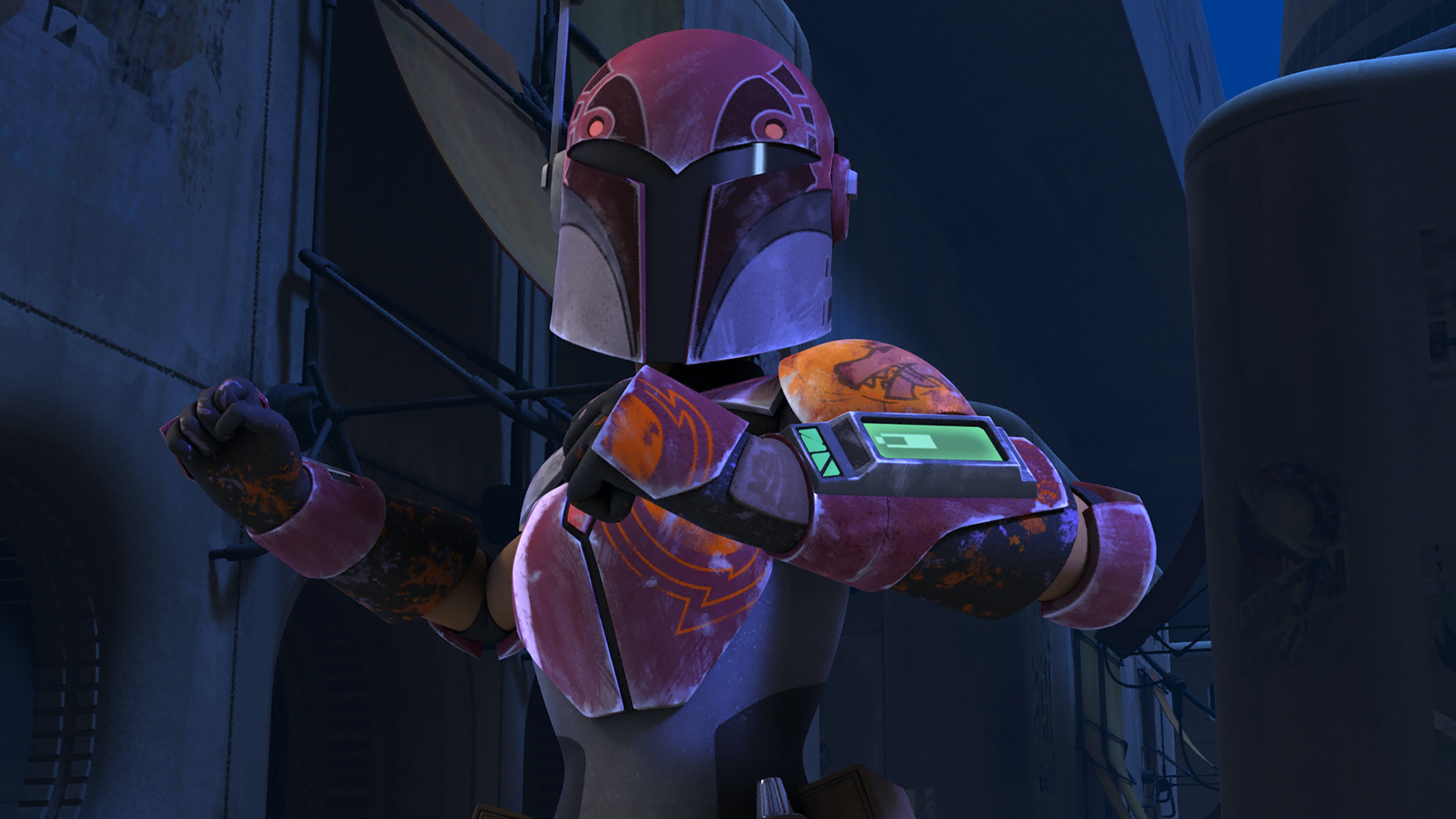 Marshall said she loved Ahsoka Tano, Asajj Ventress, Shaak ti, and the other strong women from The Clone Wars, and that Hera and Sabine “come right alongside those amazing female characters that we’ve seen before.”

“I think they’re equally deserving of that respect, and it is very cool that families are watching the show together so that you have adults and kids simultaneously witnessing these role models. It’s really very moving, and that’s what I’m most moved by on Twitter is how many fathers say ‘My daughters are in love with Hera and Sabine.’ It just really thrills me,” she said.

Fans have definitely been excited by Hera and Sabine since before the show even started, despite some of their concerns. Fan art and cosplay of the characters began before the show aired. Sircar said she had no idea what to expect when joining the Star Wars universe and that it was a little daunting knowing the big shoes she was stepping into. Her anxiety quickly disappeared due to the support, encouragement, and enthusiasm from fans on social media and in-person, which made her feel like being welcomed into the family.

“It’s true what they say, that Star Wars fans are the best. It was such a pleasant surprise that I hadn’t considered what that part was going to be like, and it’s been like the greatest part of this experience,” Sircar said.

Marshall has also had an amazing experience with fans.

“The enthusiasm has been contagious and very rewarding and uplifting. Luckily for them there are a bunch of Star Wars nerds who are doing the show. All of us actors adore the franchise, so there’s just a whole lot of collective positive energy around it which is really like a dream come true. It’s like the best case scenario…” she said. “It’s a very exciting time to be a part of the Star Wars fandom in cartoons, in literature, and on the screen next year.”

With Rebels already renewed for a second season, we can only hope that Marshall and Sircar have plenty more time to portray these amazing women on screen so we can see more of them.

Star Wars Rebels will return from its mid-season break on Jan. 5.