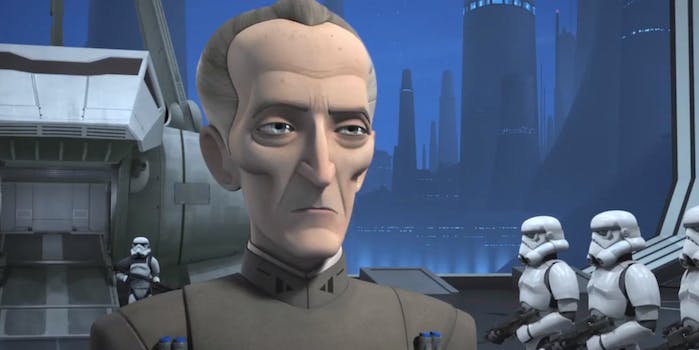 One of the original Star Wars trilogy's greatest villains will appear on the Disney XD show.

Star Wars Rebels has seen its fair share of cameos lately. First there was Yoda, then there was Lando, and now another Star Wars character from the original trilogy is making an appearance—though this one will be a bit more villainous!

The Empire’s Grand Moff Tarkin will pay a visit to the animated series during the Feb. 9 episode “Call to Action.” In the episode, Tarkin visits Lothal to deal with the rebels making trouble for the Empire on the planet and to discuss the possibility of a Jedi leading the group. The actor who voiced Tarkin for Star Wars: The Clone Wars, Stephen Stanton, returns for the part.

In the films Tarkin’s character only played a big role in A New Hope, but that was enough to leave a lasting impression. Between his destruction of Alderaan in front of Princess Leia and his close relationship with Darth Vader, he’s one of the most iconic villains in the franchise. Of course it helped that the role was played by the late, great actor Peter Cushing as well.

With Tarkin’s arrival, it will be interesting to see how Star Wars’ new rebels handle this increased Imperial presence. Watch Tarkin’s return in two clips from the upcoming episode below.