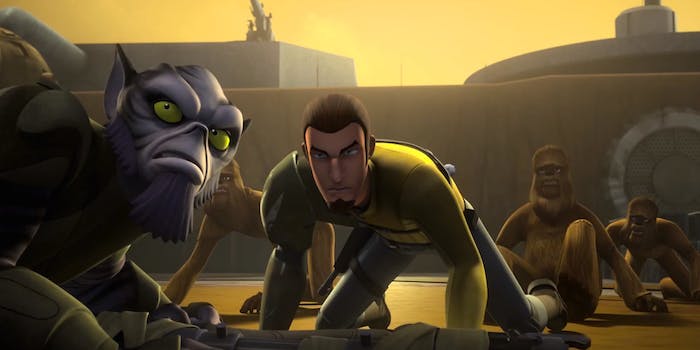 A certain lovable droid duo will be making an appearance.

One night after Lucasfilm and Disney kicked off San Diego Comic-Con with an exclusive Star Wars: Rebels event, the first episode of the series premiered in a special screening Thursday.

While the episode wasn’t quite finished, and thus not ready for review, that didn’t bother the audience present one bit. The episode was screened after a brief introduction from Lucasfilm and the Rebels team which included executive producer Dave Filoni and cast members including Freddie Prinze Jr. and Vanessa Marshall.

The audience didn’t hold back their excitement during the episode, cheering during some scenes and laughing loudly at others. The tone delivers on what the trailers have teased and harkens back to that golden original trilogy era. There may be darkness in this pre-A New Hope series but there’s a lot of hope and fun as well.

Those present were also encouraged to share their feelings about the episode on social media, avoiding spoilers, but giving their impressions.

Have no fear Star Wars fans: Rebels is breathtaking. The wait for October will be excruciating. #StarWarsRebels

At the screening, attendees were also treated to a new video looking ahead at the series. It caused enthusiastic cheers when it showed a certain lovable droid duo will be making an appearance.

The upcoming animated series will premiere with a one-hour episode on the Disney Channel in October with the following series airing on Disney XD.