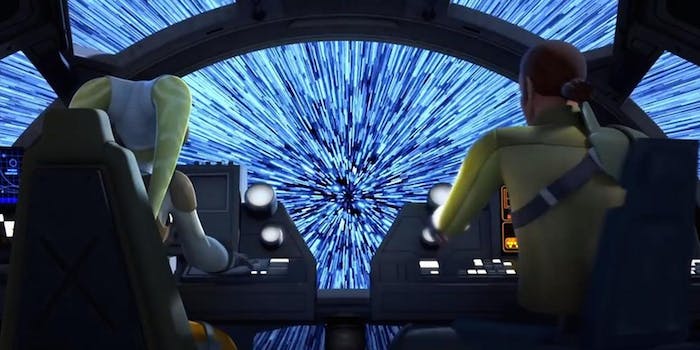 Disney will release ‘Star Wars Rebels’ on its app before TV

But you still have to have cable to watch.

The wait is over! Disney and Lucasfilm have announced when fans can expect their next Star Wars fix with the premiere date of the new animated series Star Wars Rebels. There is, however, a bit of a catch when it comes to just how soon you can view this new content about that galaxy far, far away.

The show will premiere with a one-hour movie titled Star Wars Rebels: Spark of Rebellion, which was previewed at San Diego Comic-Con in July. Before fans can see the series kick off on TV though, Disney is making it first available digitally to verified users. The movie will be available to watch Sept. 29 on the free WATCH Disney XD app and WATCHDisneyXD.com, but the release follows the now popular model of making viewers sign in with their TV provider in order to access programming. Your TV provider needs to be participating in the service, so not everyone has the option of logging in to watch. For anyone unable to access the app, they’ll have to wait until the end of the week to see the movie premiere on the Disney Channel on Oct. 3. The series will then begin to air regularly starting Oct. 13 on Disney XD.

Premiering its first big Star Wars release digitally is an interesting move from Disney, which perhaps is hoping to boost buzz around the series. It’s already been making a big push leading up to the show between events at Comic-Con, extended previews, and the release of four original shorts. By releasing the movie digitally on a Monday before a wider release Friday, Disney may hope those with access share their thoughts on social media so others will be dying to tune in to the TV premiere by the end of the week.

After the premiere airs, Disney will open up another avenue to watch, putting the movie up for purchase on Apple iTunes, Amazon Instant Video, and Google Play on Oct. 4. It’s an interesting focus on digital promotion that just may be indicative of what we’ll see in the future.