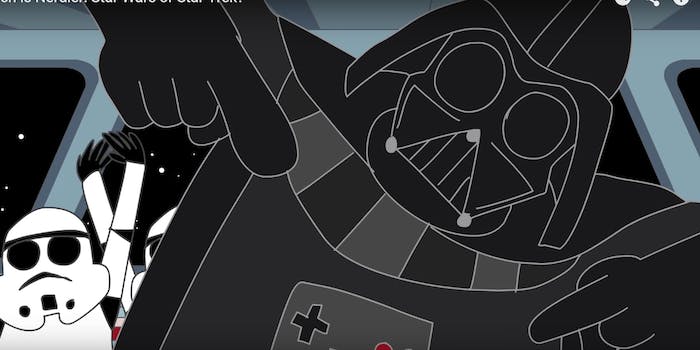 12 of the weirdest, funniest, and most adorable ‘Star Wars’ videos on YouTube

What will fans come up with for Episode VII?

Behind every great franchise is an equally strong and creative fanbase, and of course Star Wars is no different.

Thus we’ve compiled 12 of the weirdest, funniest, and cutest Star Wars fan-created videos we’ve encountered on YouTube—all in preparation for The Force Awakens.

You can queue this list up as a pre-show to get excited before you head to theaters for the film on Dec. 17—or just binge them all right now. We’ll probably do both.

2) In an unlikely pairing, C-3P0 and Darth Vader bust some strange moves in this metallic, cosmic disco.

3) A couple of guys do an a capella rendition of the song from the Mos Eisley Cantina and sync it to dance scenes from classic films like Pulp Fiction, The Breakfast Club, and Dirty Dancing. We obviously need this.

4) Prepare for the cutest Storm Trooper you’ve ever seen.

5) Speaking of dogs and Star Wars, what if AT-ATs were house pets? (Can this please be a thing?)

6) Is everyone telling you to skip The Phantom Menace in your six-movie Star Wars marathon. That’s OK, you can just watch “Weird Al” Yankovic summarize it for you.

7) There’s also this “Sweded” (and much lower budget) version of “the real” Episode I. The characterizations, special effects, and soundtrack are all pretty spot on.

8) From the description: “This is the really strange campy circus dance from the Star Wars Holiday Special.”

9) In case you wanted some politics, here’s an interesting discussion about the contractors who built the Death Star. Bet you never thought about them before.

10) Hitler has no chill with his passionate freak out over The Force Awakens trailer.

11) From the depths of Newgrounds animations, how could we ever forget about the Star Wars Gangsta Rap from 2004?

12) Since forever, Star Wars and Star Trek vie for superior nerdiness, and who better to fight for it than Darth Vader and Captain Jean-Luc Picard themselves?