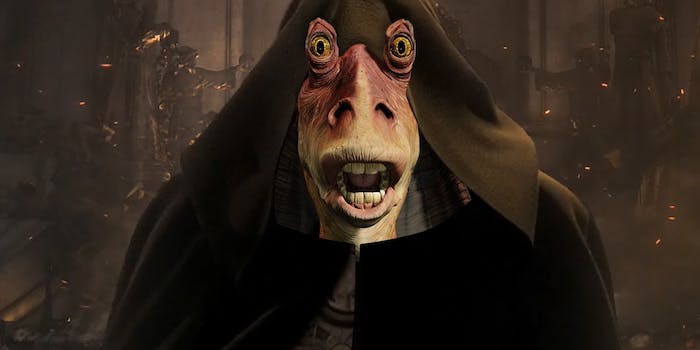 It's unlike anything we've ever seen before.

Is it possible that the biggest source of evil in the Star Wars galaxy has been under our noses the entire time?

In the leadup to the release of The Force Awakens, fans have speculated endlessly about the film’s story and the mysteries surrounding the main characters. (Even with all of the hype, we’ve actually only seen just under four minutes of footage.) Where is Luke Skywalker? Which characters are related to one another? Is BB-8 actually evil? We just don’t know!

But according to Reddit user Lumpawarroo’s elaborate fan theory on r/StarWars, what we should really be asking is, has Jar Jar Binks been a Sith Lord this whole time?

Over the past two days, this Jar Jar Binks theory has positively engulfed the Star Wars Internet. It has its own subreddit and a matching website so that it doesn’t get lost between now and the Dec. 18 release of The Force Awakens. What’s so compelling about the theory is that it transforms one of the most disliked characters in the Star Wars saga into one of its most important and sinister villains.

Even if the theory is a load of hogwash, we doubt we’ll ever look at the divisive Gungan ever again.

And when you seriously consider the theory, you find that it’s so outlandish that it just might work.

The theory draws on evidence found throughout the prequel trilogy (but mostly in The Phantom Menace) to demonstrate how Jar Jar played the fool and hoodwinked us all—and how he might actually in charge of the entire First Order (the reborn Empire of the sequel trilogy) in the guise of one “Supreme Leader Snoke.”

For one thing, Jar Jar Binks’s acrobatic skills and uncanny ability to evade danger, destroy a bunch of droid soldiers, and save the day is not a Gungan skill or the result of an overused trope. At the very least, he’s Force sensitive, and at the very most, he could secretly be a Jedi or a Sith. Binks has also proven himself to be a master of mind control with his Jedi Mind Tricks: He worked his way up to General in the Gungan military, scored a spot on Naboo’s delegation to the Galactic Senate, and even convinced the entire Senate to give all of its power to Emperor Palpatine.

Yes, the death of democracy didn’t result from Binks giving Palpatine unlimited power because that’s what he thought Padme would do. But beyond that, Binks also managed to convince a young Anakin Skywalker to pursue Padme, and taught him to disrespect his elders, adding another tragic layer to that whole story.

The only reason Lumpawrroo believes that George Lucas never truly went through with the whole “Jar Jar Binks is a Sith lord” plan is because he chickened out upon seeing the Jar Jar backlash to The Phantom Menace. (An Attack of the Clones Jar Jar action figure holding an Electropole with a lightning bolt seems to support the idea that Lucas originally intended him to have a larger role.)

How Jar Jar Binks managed to survive the fall of the Galactic Empire in the original Star Wars trilogy and transformed into Supreme Leader Snoke (in addition to gaining Andy Serkis’s voice and diction) is less clear. We also have no idea how long the average Gungan lifespan is, so we wouldn’t even know if Jar Jar Binks could be alive right now.

But who else would have such intimate and extensive knowledge of the Galactic Empire’s plans?

It’s also curious that Serkis and Ahmed Best, who played Jar Jar in the prequel trilogy, have already met. (We do have to point out that this meeting occurred more than a year before Serkis was officially announced for The Force Awakens.)

Jar Jar and Gollum together at last. pic.twitter.com/tSNkNqQH

The whole idea of Jar Jar being an evil mastermind is another popular trope—as well as being one ripe for parody. It was a gag in a 2012 Robot Chicken clip in which Emperor Palpatine atones for all of his sins as he falls to his death, and it featured in a Force Awakens teaser with 100 percent more Jar Jar earlier this year. Both paint Jar Jar as a nefarious mastermind.

Regardless of how much merit the theory has—and while it may be a new favorite, it probably won’t have much merit once we see the film—the Internet is having fun with it for now, rounding up even more support through Photoshop, comparisons, and even Lego manipulation.

Best seems to be getting a kick out of the theory, embracing it with a cryptic message to Star Wars fans.

I will say this, it feels really good when the hidden meaning behind the work is seen. No matter how long it takes. #TPM

If nothing else, the theory has giving an unintentionally hated Star Wars
character a grand and spectacular second life.