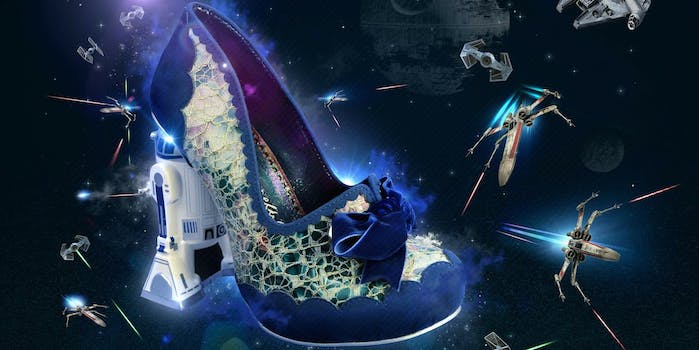 These are the 'Star Wars' shoes you've been looking for!

From sneakers to crocs, Star Wars has inspired its fair share of officially licensed footwear through the years. But you’ve never seen Star Wars shoes like this before.

Just in time for The Force Awakens, fans will have a whole collection of high-fashion, Star Wars-inspired shoes to choose from thanks to a new limited-edition line from Irregular Choice.

The U.K. based footwear company is releasing a 14-piece collection featuring characters and imagery from the original trilogy. “I have always been a big Star Wars fan and having had huge success with our seasonal character heels over the years it made sense to try and explore new collaborations with Disney. The collection itself has been in development since last year,” Irregular Choice owner and main designer Dan Sullivan told the Daily Dot in an email interview.

The company has been releasing teaser images of the line ahead of its release at the end of October. So far fans have seen a pair of R2-D2 heels, C-3PO flats, and lightsaber heels that flash when you walk and play sounds from the movies. According to Sullivan, Disney gave him initial guidelines and then let him develop ideas for the line.

“Fortunately they loved them and supported us all along. They loved the fact we were coming at it from a unique perspective and designing something like no other collaboration has offered before. I actually quite enjoyed having some boundaries and seeing how much I could push them whilst still being true to the iconic Star Wars feel. It was a very new way of creating and expressing the Irregular Choice brand and I really enjoyed exploring it,” he said. During the process to create the collection, Irregular Choice designed the characters they wanted to use first and made sure the characters were approved by Disney.

“I felt I wanted to develop the characters first and make sure all looks and moulds were the best they could be and then I started to work on the uppers, trims, and overall patterns to accompany the feel of the style,” Sullivan explained.

The characters presented one of the principal challenges Sullivan faced when designing the collection. Irregular Choice had to make “the characters look correct on specific dimensions and colors for Lucasfilm’s approval.”

“Also, making sure that every detail of the design [and] character is tied into the correct episode. We had to be completely true to each episode, for example you can’t use a print or character from one film alongside any print or characters that didn’t feature in it,” he said. “This is why we couldn’t [use] Yoda on our outsole prints, as we wanted these to be the same across the whole collection to tie it together, but Yoda didn’t feature in all episodes.”

Another challenge involved some of the shoes with sound. For these Irregular Choice had to make sure the sound quality and volume from the shoe would be the best possible. The collection includes a lot of unique looks Star Wars fans will enjoy, with bright colors and characters. Add to that the sounds and lights and these seem like the shoes that fashionably adventurous women have been waiting for as fans.

“My inspirations really come from traveling and seeing different cultures, but then I let my imagination run wild and invent the most different shoes I can possibly think of that can accompany an exciting collaboration like Star Wars. I am going for intense shock factor, but still something wearable and affordable and I feel this collection represents both of them things,” Sullivan said. “I am [a] strong believer in creating shoes our fans know they will not see other people wearing down their local. With Star Wars, I knew each style would be super limited-edition from the beginning, so these styles will be even more exclusive. It’s also very important for me to make sure this collection hits affordable price points so that the few lucky Irregular Choice or Star Wars fans can have their own Cinderella moment.”

The style is in tone with many of Irregular Choices’ other available heels like their “Throw a Six” and “Squeezy” shoes, just with a familiar Star Wars twist. It’s nice to see an official collaboration focus on shoes that will be particularly appealing to the female fanbase, though Sullivan thinks Star Wars fans are not the only ones the line will reach.

“This collection is not only designed for avid fans, but anyone who loves creativity and fun. Our die hard Irregular Choice fans who may not be Star Wars [fans] will be introduced to it and Star Wars fans will be introduced to Irregular Choice and what we do. We feel it targets people that appreciate having a unique collaboration. Historically, Star Wars has predominantly been marketed to the masculine fan base and we wanted to acknowledge the ladies out there who love it also by offering girlie heels and delicate flats,” Sullivan said.

Irregular Choice’s limited-edition Star Wars collection will be available in select stores and on the company’s website Oct. 30.