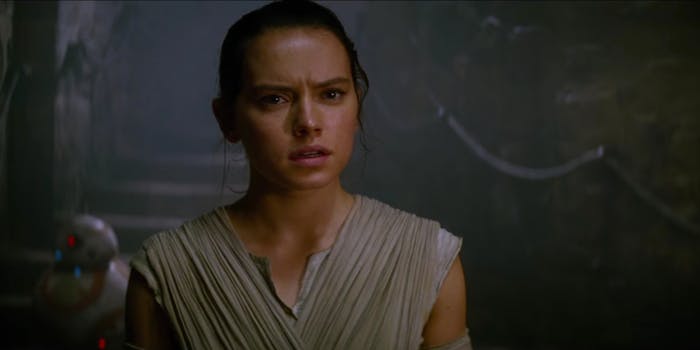 Who is Rey? A deep dive into the new hero at the heart of ‘Star Wars’

She's the main character of the new trilogy—and the most intriguing.

Star Wars: The Force Awakens has left us with more questions than answers, but none more so than the film’s breakout star.

Throughout the film, Rey goes from a scavenger on Jakku waiting for the family who abandoned her, to becoming strong with the Force once it awakens within her. Although nowhere near a fully fledged Jedi, she fights off Kylo Ren’s mind probe, tricks a stormtrooper into setting her free (and handing over his blaster), and although she initially doesn’t want it, takes Luke Skywalker’s lightsaber and holds her own in a battle against Kylo. She ends the film finding Luke and presenting his old lightsaber, and we can only presume that their training begins in Episode VIII, which begins filming next month.

And while there are some detractors, she’s already becoming one of the movie’s favorite characters.

But as much as The Force Awakens is about Rey, we end up learning very little about her. Who is she? Where did she come from? Is this the first time she’s using the Force? And what connections does she have with the older generation?

While we’ll likely have to wait until Episode VIII’s release on May 26, 2017 (yes, really) for answers, we’ll have plenty of time to speculate as it smashes some more records along the way.

Who are Rey’s parents?

Fans had plenty of theories when it came to the subject of just who Rey, Finn, and Kylo were related to before The Force Awakens came out, which were mostly proven wrong or unaddressed. We learned that Kylo was the son of Han Solo and Leia Organa—and that his real name was Ben right before Kylo killed Han—although details on Finn and Rey’s parentage were far less forthcoming. Finn doesn’t remember his parents, having been kidnapped and essentially brainwashed by the First Order while Rey has spent 14 years waiting for hers to come back and get her.

“Classified, really?” Rey asks BB-8 after he responds to her question of where he comes from. “Me too.”

While The Force Awakens doesn’t necessarily rule out any of the theories about her, they don’t exactly confirm anything, either:

If we take The Force Awakens at face value, Luke having a daughter seems to be the most likely scenario. She has a strong connection to Luke’s lightsaber, and the first time she touches it she is thrust into a number of flashbacks: she’s in the halls of Cloud City, sees Luke putting his hands on R2-D2 and Kylo and the Knights of Ren after the massacre of Luke’s students, and she’s thrust into the day she was left on Jakku at five years old before seeing Kylo in the snow—a scene that’ll be familiar to her soon enough. We even hear some familiar voices along the way.

Once Rey is brought back to Maz Kanata’s castle, she tells Rey that Luke’s lightsaber is calling to her. She is meant to have it. And when she refuses, Maz gives it to Finn for safe keeping.

There is a strong connection between Rey and Luke’s lightsaber, but is it strictly because of the Force?

And when Rey and Luke finally do meet, he has what looks to be a pained or troubled look on his face. Is it because of who Rey is—or what she brought with her?

What was the more popular Skywalker sibling theory seemed to have been stamped out once Han and Leia openly acknowledged Kylo/Ben was their son—throughout the movies neither of them said anything about a daughter.

But that’s not the only thing that negates what some fans thought was a reimagining of the Solo twins from the Expanded Universe. Kylo was born shortly after the Battle of Endor while Rey is 19 when we meet her, according to the Star Wars: The Force Awakens: The Visual Dictionary.

So by the time Rey is born, Kylo is already almost 10 years old and already a student of his uncle, Jedi Master Luke, who was sent there by Han and Leia at a young age. And some time in those 19 years, Kylo’s Jedi massacre and Rey’s abandonment on Jakku both occur; these two events may or may not be mutually exclusive, but we’ll get to that later.

Rey eventually meets Han, who Vox’s Todd VanderWerff believes have a relationship similar to an estranged father and daughter, and later watches her father (or father figure) die similar to how Luke witnessed Obi-Wan Kenobi’s death in A New Hope. But the bigger question is, if Rey is in fact Han and Leia’s daughter, do they even know?

There’s a couple of ways this could play out. If Rey was a young Padawan at Luke’s temple and survived the massacre, Luke may have hid her for her protection without letting Han and Leia know their daughter survived or may have wiped her from their memory. The theory that Leia had Rey after she and Han became estranged is less likely due to timing.

Fans seem to agree that even though being Force-sensitive isn’t dependent on blood relations, Rey is probably related to someone who is strong with the Force. And if it isn’t anyone from the Skywalker line, Obi-Wan is essentially the only person left from the movies who’d fit the bill.

Obi-Wan appears ever-so-briefly in The Force Awakens, courtesy of Rey’s flashback. Both Ewan McGregor and Alec Guinness appear: Obi-Wan tells her, “Rey… these are your first steps.” The “Rey” line comes from Guinness’s “Afraid” while McGregor came in to record his part of the dialogue.

One redditor believes that Obi-Wan may have had a child during his time exiled on Tatooine looking after Luke, and that child would go on to have Rey. The two characters have a lot of similarities, and it would explain her strong ties to the Force.

We haven’t met Rey’s parents yet

Daisy Ridley, who brought Rey to life on the silver screen, revealed in a recent interview that she had visited the set of Rogue One, the first planned Star Wars anthology film about the Rebels who stole the plans to the Death Star. And while it’s highly unlikely that Rey will appear in that film in anything more than a stormtrooper-esque cameo—considering Rey is at least a decade away from being born in the timeline—is it possible that Ridley was getting insight into the characters who may end up being her parents? Or, more likely, just a friendly and very lucky set visit by a Star Wars fan?

Was Rey aware that she was Force-sensitive prior to The Force Awakens?

Rey is nowhere the level of being a Jedi Master by the end of The Force Awakens, but she does get a quick first lesson from Maz about the Force as soon as she experiences her awakening.

“I am no Jedi, but I know the Force,” Maz told Rey after the flashback. “It moves through and surrounds every living thing. Close your eyes, feel it. The light. It’s always been there. It will guide you.”

Throughout the rest of the movie, Rey is especially strong with the Force. She can fend off Kylo’s attempts to read her mind and begins to see what’s in his mind. She’s able to pull off one of Obi-Wan’s classic Jedi mind tricks. And when she’s at her lowest point and about to lose to Kylo, she remembers Maz’s words of wisdom and she defeats him.

She easily adapted and learned, often after Kylo attempts to use these moves against her, but because she is untrained in the Force some fans have wondered just why Rey was able to get a hang of it so quickly. Some of those sentiments may be due to subtle sexism—nobody questioned how Luke he directed his blasters into a thermal exhaust port with the Force while virtually untrained in A New Hope—there could easily be a reason for that: This wasn’t Rey’s first tango with the Force.

Regardless of who Rey’s parents are (although Leia or Luke being one of her parents would give even more evidence), some fans believe that Rey was a young Padawan at Luke’s Jedi academy when Kylo Ren and the Knights of Ren attacked. Luke, realizing that Rey was the only survivor, then took her to Jakku, the same planet where Lor San Tekka (a follower in the Church of the Force) lived—or maybe he went there when Rey arrived. He may not have taken care of Rey, who was handed off to who appears to be Junkar Plutt, but he might’ve been close enough to keep an eye on her in case Kylo came calling.

Then why doesn’t she remember this? It’s possible that Luke may have performed a mind rubbing on Rey in order to protect her from that part of herself, a concept that happened somewhat frequently in the EU and was made canon by The Clone Wars, before taking her away to Jakku. Plus it brings yet another callback to the older films, where Luke was hidden on the desert planet of Tatooine by the man who would become his first teacher.

Perhaps that some of those memories were triggered when she encountered Luke’s lightsaber.

Did Kylo save Rey as a young girl?

In Rey’s flashbacks, it’s fairly easy to tell when it comes from her memory (e.g. her arrival on Jakku) and when she’s merely watching it transpire (e.g. Cloud City). But it’s that moment in the rain where she faces the Knights of Ren that is giving fans even more reason to rewatch those scenes.

Rey finds herself on the ground after witnessing Luke put his hand to R2-D2 in the rain. Someone wearing a round helmet is about to strike her down before he or she is taken down by a lightsaber—Kylo’s. Once Rey stands up, she finds herself facing Kylo flanked by the Knights of Ren. Bodies of the young Jedi students Kylo and the Knights of Ren killed surround them.

Fans have speculated that Rey was there during the Jedi massacre, which is when that particular flashback took place. And Kylo just saved her. But did he save his younger sister, cousin, or someone else entirely? And if he did, what happened to the rest of the Knights of Ren who just witnessed that?

In the novelization of The Force Awakens (which is canon—unless something in the book contradicts the movie), Kylo initially wonders who Rey is when he meets her, but by the time they meet for their lightsaber duel he recognizes her as someone he knows; “It is you,” he says. But who is she, and where has he seen her? He doesn’t say.