You'll never look at this masked villain the same way.

Star Wars: The Force Awakens is only four months away. Think that’s hard to believe? Wait until you read the details about the movie’s main villain, Kylo Ren, that Entertainment Weekly will reveal in this week’s issue.

EW‘s Fall Movie Preview features Ren, played by Adam Driver, front and center on its cover, so you know what to expect inside. The magazine is already sharing highlights from its cover story, an interview with director J.J. Abrams, in which he discusses what brought him onto the project and pulls back the curtain on Ren in a major way.

Star Wars fans are beside themselves with excitement after reading a few of the new facts about Ren, whose crossguard lightsaber was one of the first major stories to come out of the initial teaser trailer released last November. What Abrams has to say won’t ruin the movie for you—he’s famous for storing the biggest reveals in a mystery box until his films hit theaters—but it will make you totally rethink Driver’s masked villain.

And yes, there’s some new information about the lightsaber in there, too.

The magazine also shared a gallery of never-before-seen photos from The Force Awakens and high-resolution versions of other shots—like Domhnall Gleeson as the imposing General Hux—that debuted at San Diego Comic-Con.

Here, for example, are Daisy Ridley and John Boyega‘s characters, Rey and Finn, running from First Order stormtroopers in a scene from the beginning of the film. 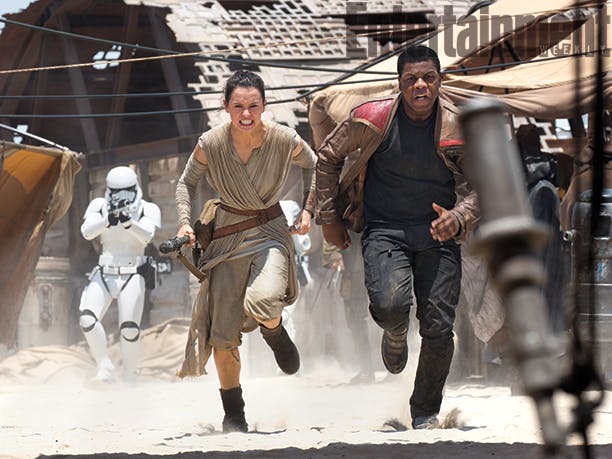