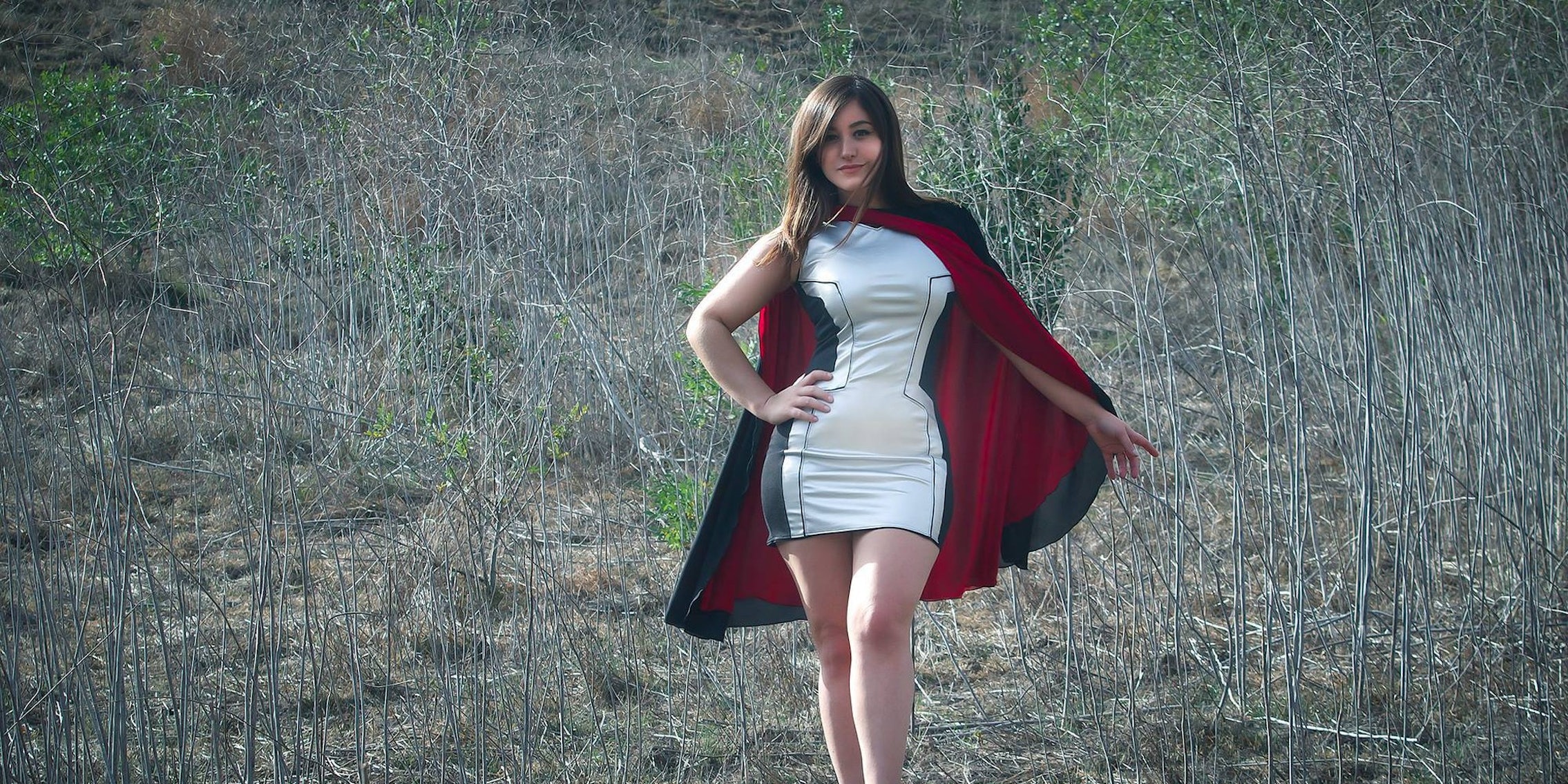 Catherine Elhoffer’s ‘Star Wars: The Force Awakens’ fashions are out of this galaxy

The Force is strong with this designer's stylish new 'Star Wars' collection.

The premiere of Star Wars: The Force Awakens is just days away, and if you’re still debating what to wear to the big release, geek fashion designer Catherine Elhoffer‘s latest collection might make you wish you’d started planning sooner.

Elhoffer has been sharing her outstanding TFA-inspired designs on social media for the past week, culminating in a beautiful photo shoot complete with props.

The line is the result of a change in circumstances for Elhoffer, who told the Daily Dot in an email interview that it all began with one dress.

“My best friend Sara was joking about how I now must have a ton of free time, since WeLoveFine terminated me, so I could finally do the commissions she’s been wanting from me,” Elhoffer said. “I had made her a Baymax dress as a birthday gift a few months ago, and she wanted another dress like it, but Star Wars themed. Captain Phasma, to be exact!”

Elhoffer continued: “She had a dress design in mind, but I immediately grabbed my sketchbook and markers and drew up what I felt a Captain Phasma dress should be. When she saw my caped dress sketch, she was totally in. Her boyfriend is in the 501st [Legion, a costuming organization] and she wanted to wear something to opening night, so she was totally in for the caped Phasma dress.” 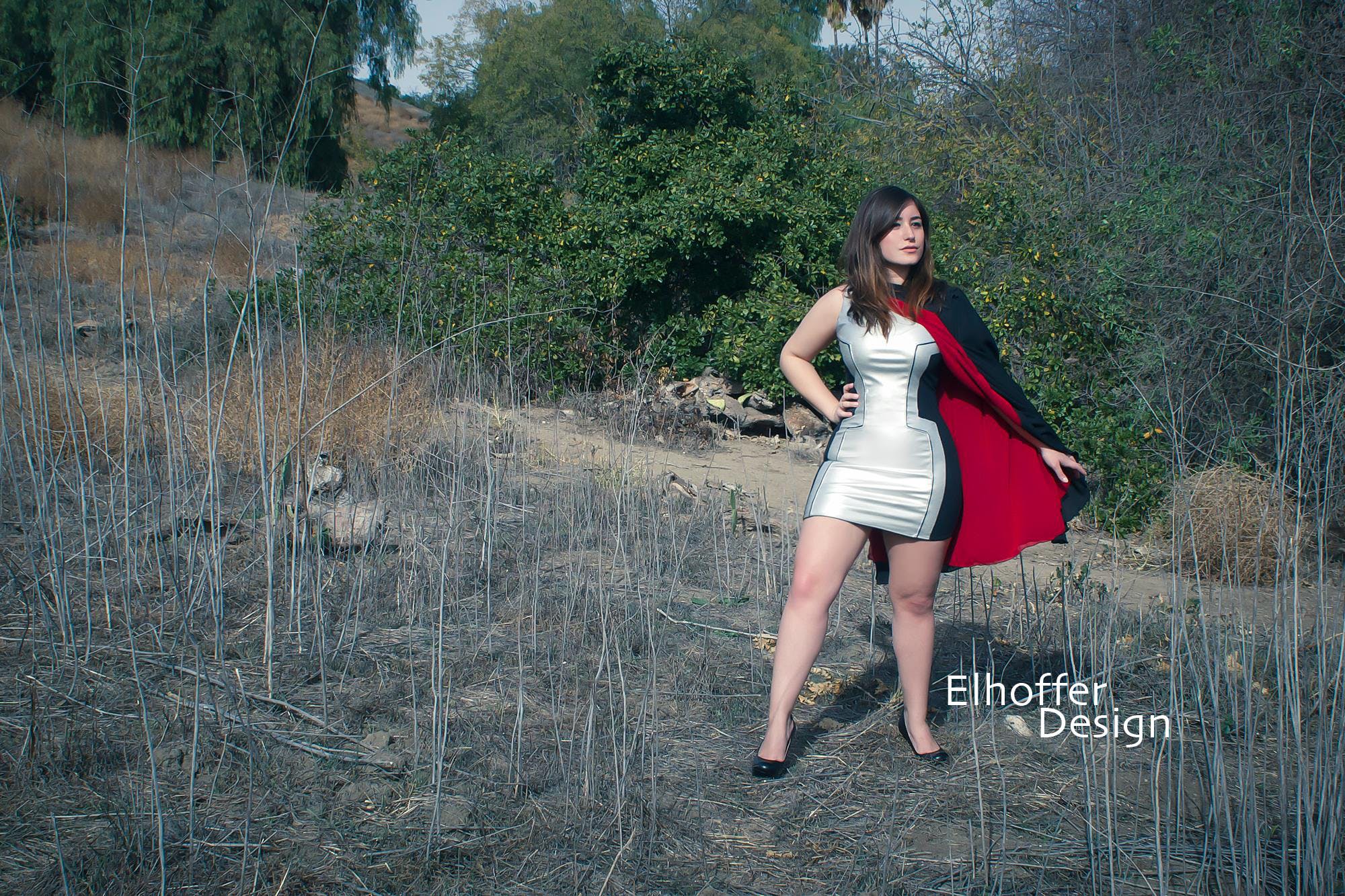 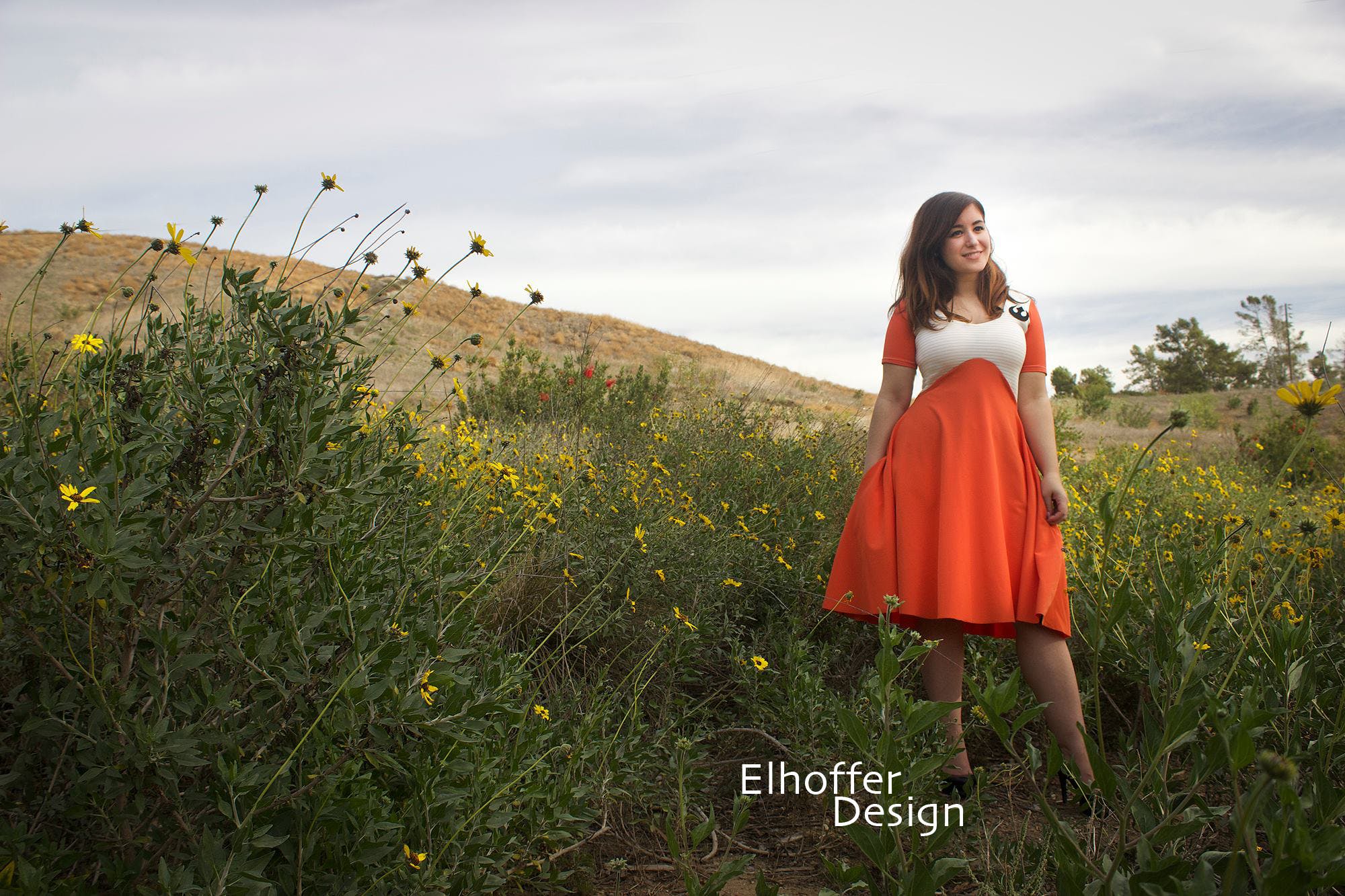 The result is a breathtaking interpretation of Phasma’s already iconic look. Fans reacted strongly to the in-progress images that Elhoffer shared online, and that reaction, along with a trip to the fabric district, inspired her to sketch more ideas for The Force Awakens looks. In addition to Phasma, Rey, Kylo Ren, Poe Dameron, a First Order stormtrooper, and Ren’s lightsaber inspired dresses in the collection.

Like the original dress, fans might wear these new designs to see the new film, so you might catch a glimpse of one at your local theater this week. But that’s not the only place they’ll appear.

“I had friends that were going to the actual premiere, with the cast and crew and all, and so the dresses that I initially made for fun and just to get my ideas out of my head, turned into being dresses that will be worn to the premiere!” Elhoffer said. “It’s crazy how things work out, but I was using this collection as a way to pull myself out of the beginnings of a depression. And now I’m overwhelmed with commissions and starting to design even more pieces!” 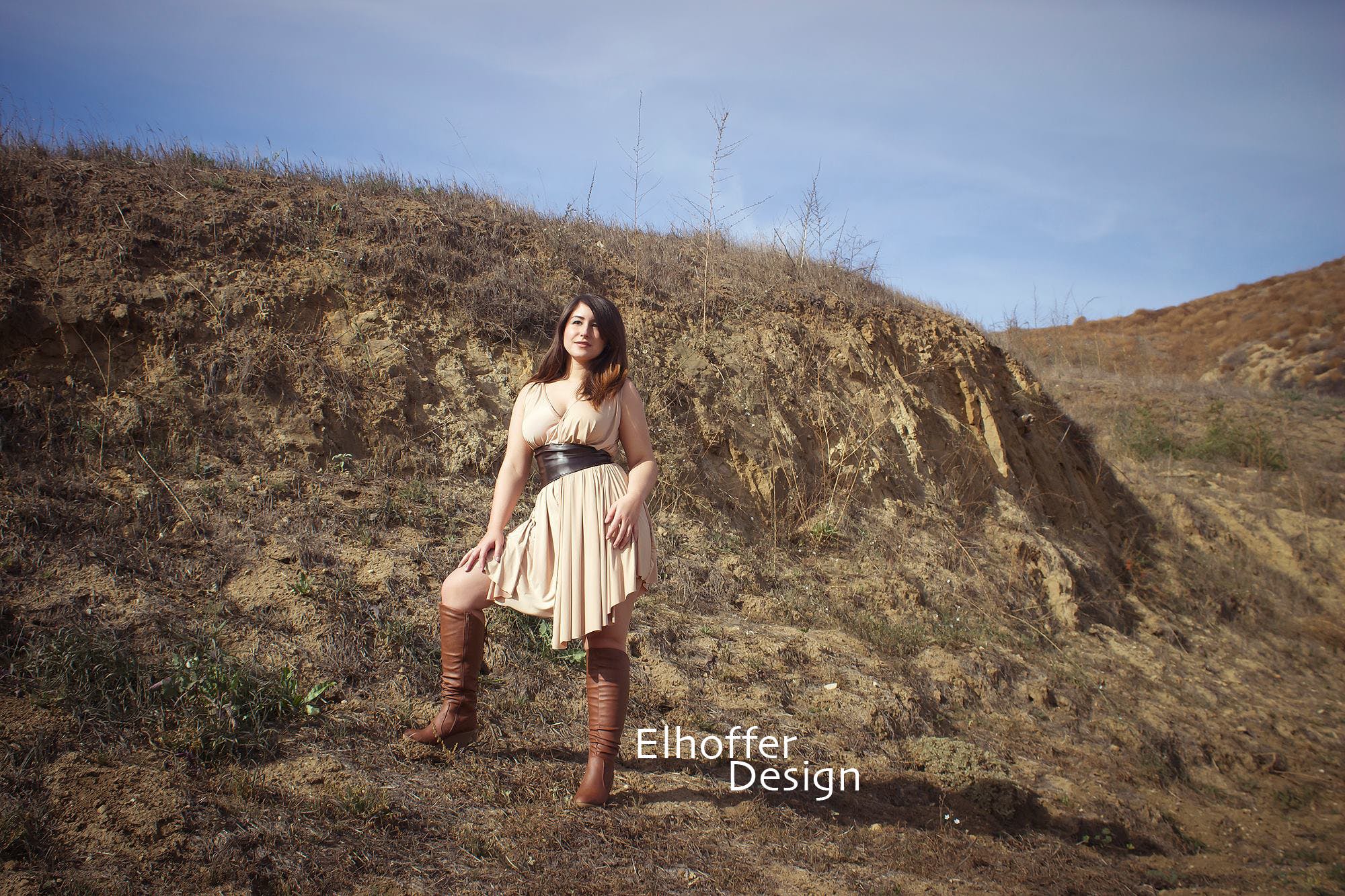 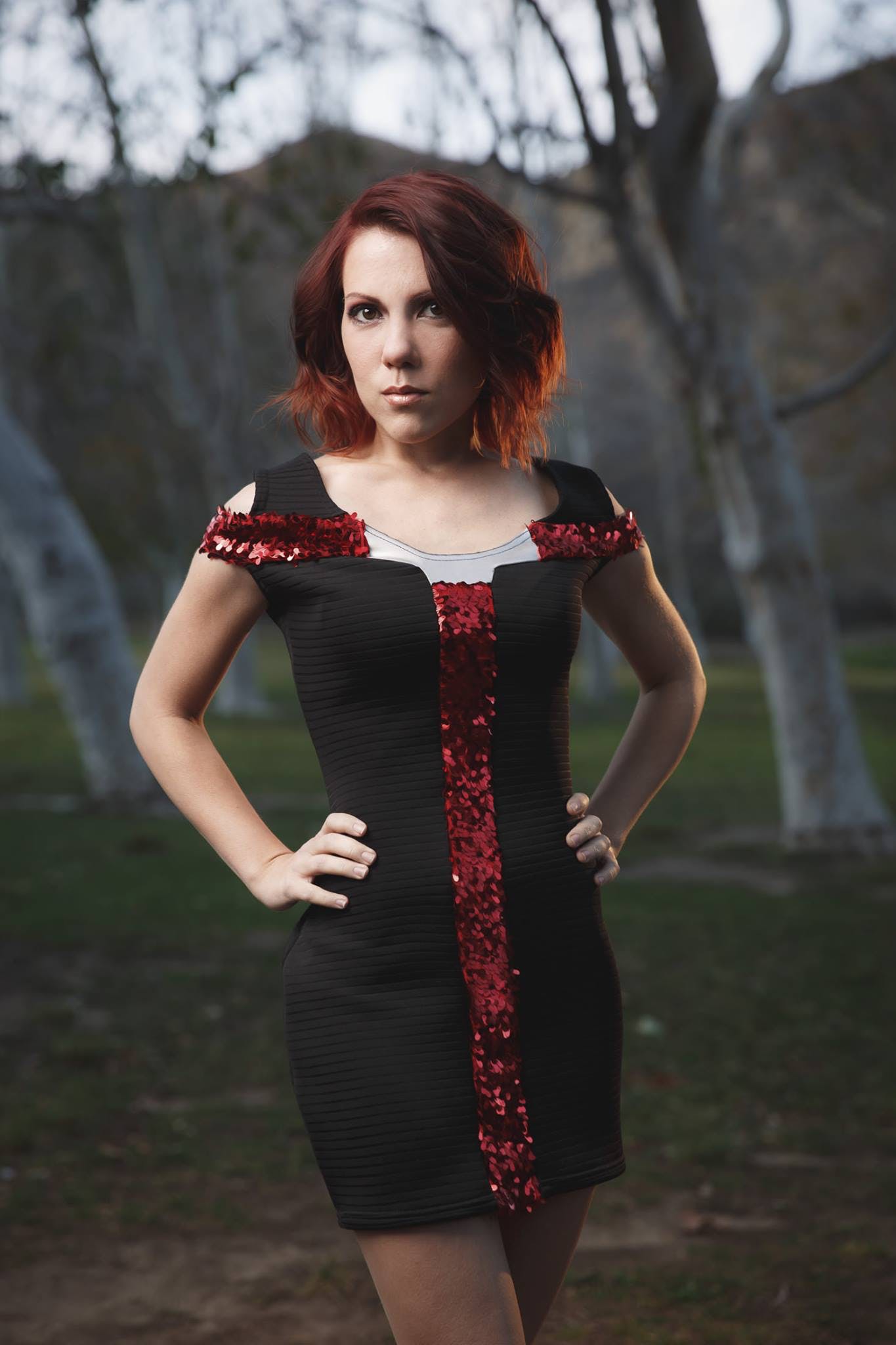 Each dress manages to capture the essence of the character or weapon while also being a subtle, stylish design. While StarWars fans will recognize their designs, others will simply see them as fashionable dresses. Elhoffer’s background in the industry came in handy when she was creating such looks.

“I like to think that my designs come naturally to me, as I normally sit down with references to the characters and some markers and just free-draw,” she said. “I’m always pulling from elements of the costumes to pull into the fashion look. It’s honestly a specialty of mine, being a costume designer and all, to be able to strip down the elements of a costume or character and translate it for the audience.” 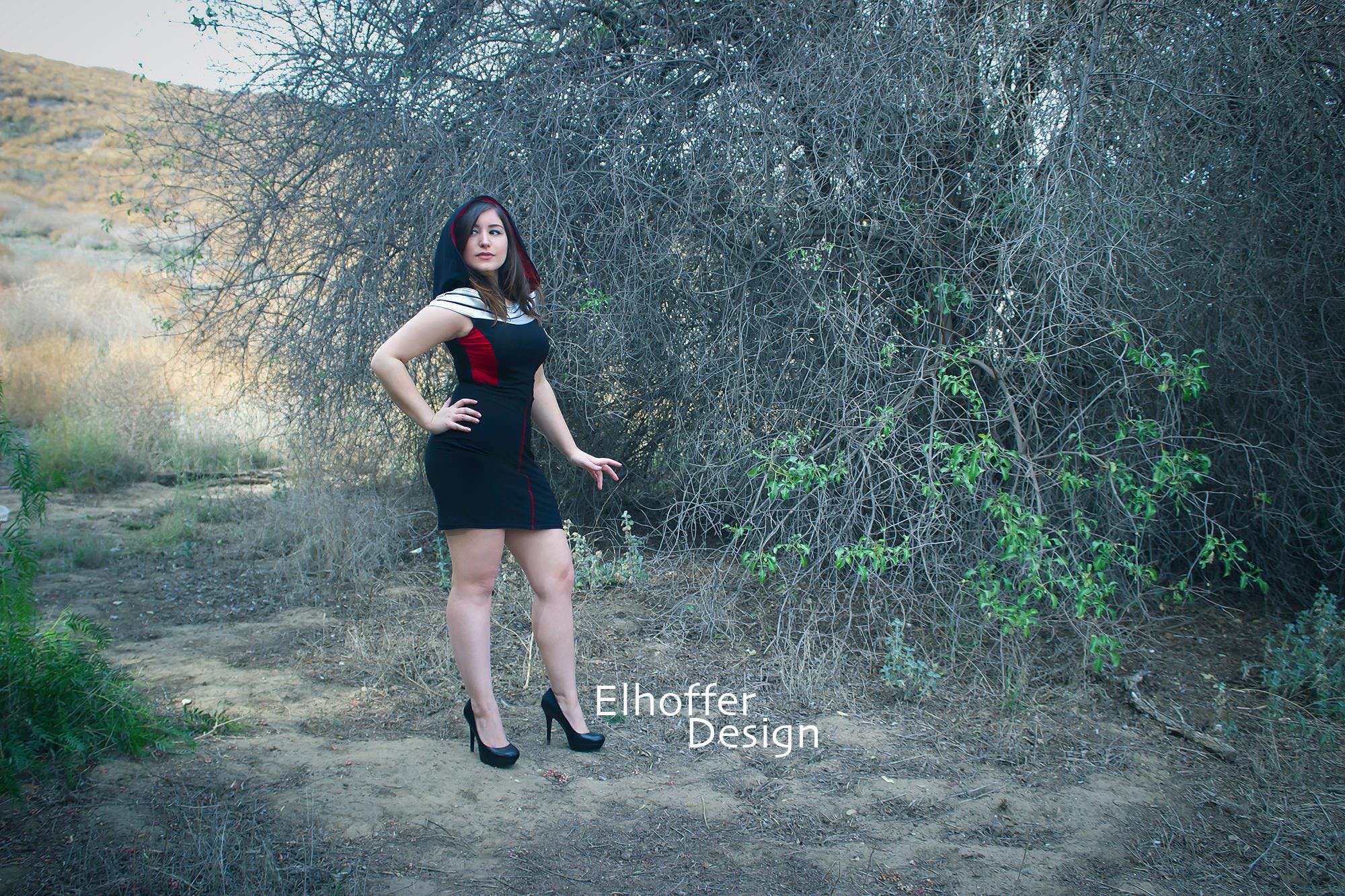 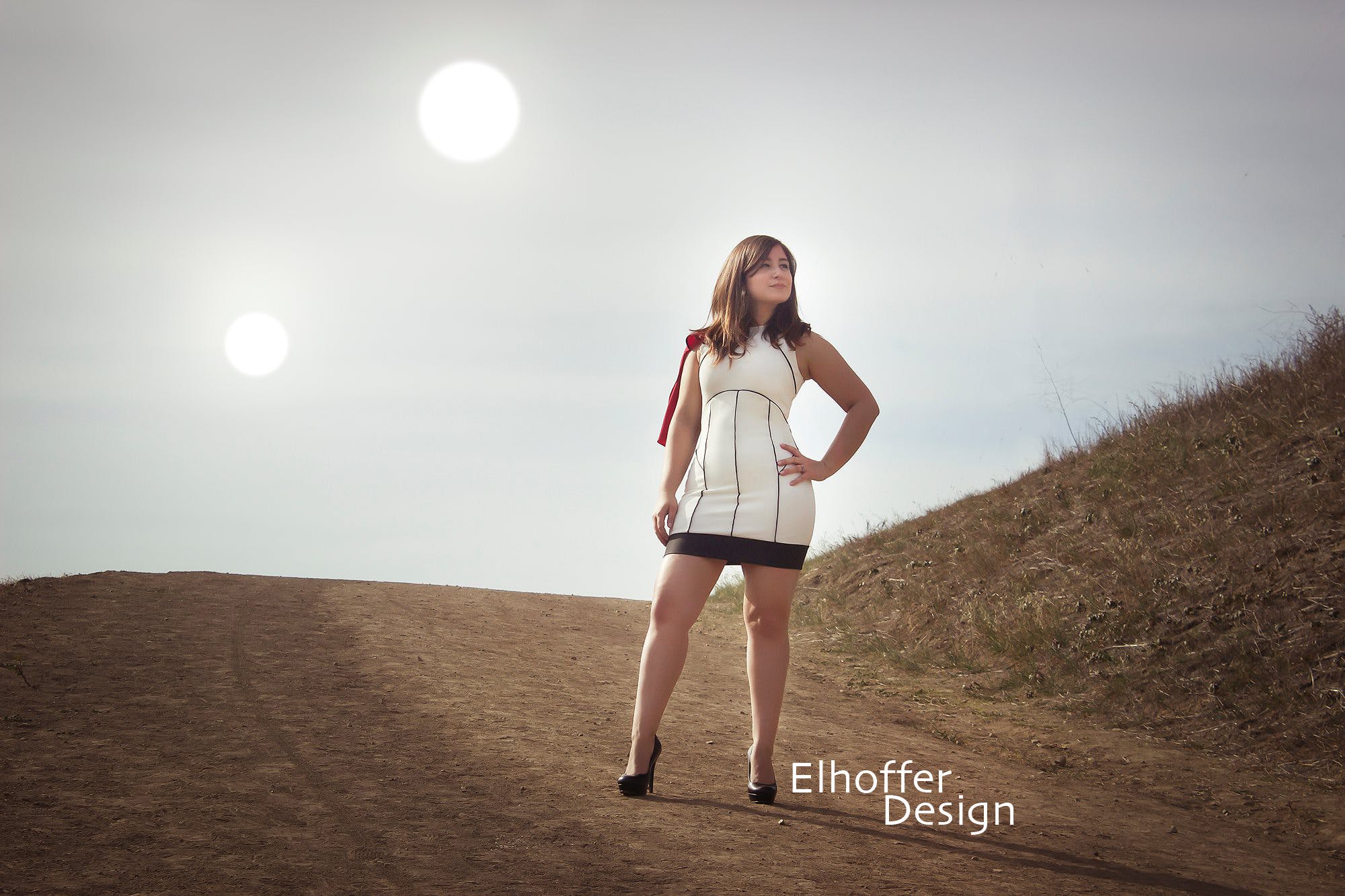 According to Elhoffer, each character was easy to design for and translate into fashion, because, to her, they were already incredibly well-designed characters—but that doesn’t mean the collection didn’t pose any challenges.

“The hardest thing with the designs was making pieces up that would be fairly easy to sew (assuming, of course, that others would want to buy them and I’d have to reproduce them) while still being interesting,” she said. “I always want to bring something cool to the design, whether it’s a cool fabric or an added fashion element. I did like eight Kylo Ren dress concepts, I’m still wanting to make a few of the others, so it’s hard to pick just one!”

While the designs were a hit with fans as Elhoffer continued to share images of her work online, they gained even more attention when they appeared in a recent photo shoot.

Elhoffer shot the photos in two locations over the course of a few days. They even feature props like a lightsaber and blaster, which Elhoffer said came “courtesy of Michael Bender, another 501st member, who loaned them to us for the shoot.” 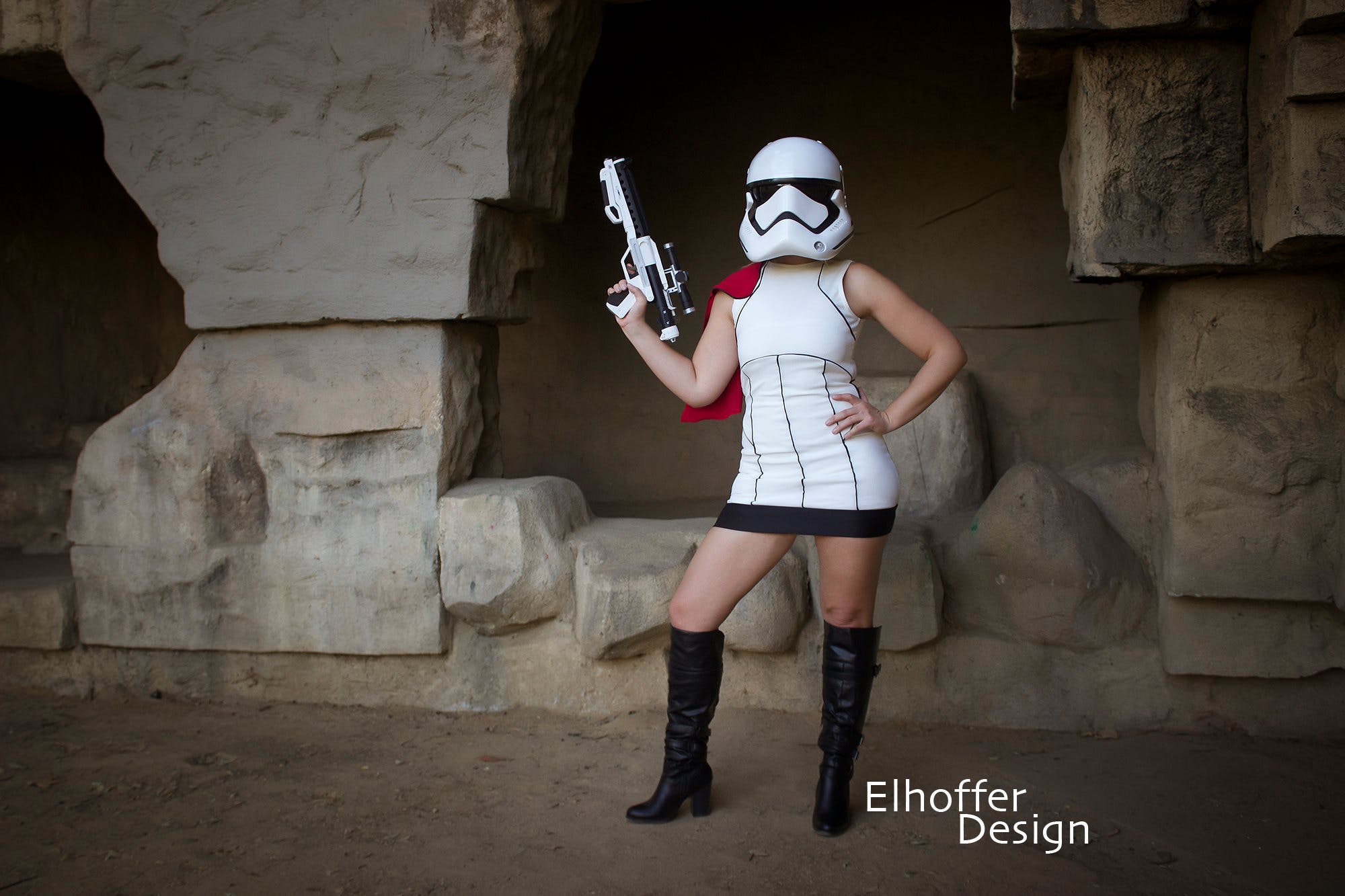 “The photo shoot came about because I have a camera and a few friends that were really wanting to model my pieces, and a desire to maybe get a few more commissions before the movie comes out!” Elhoffer said. 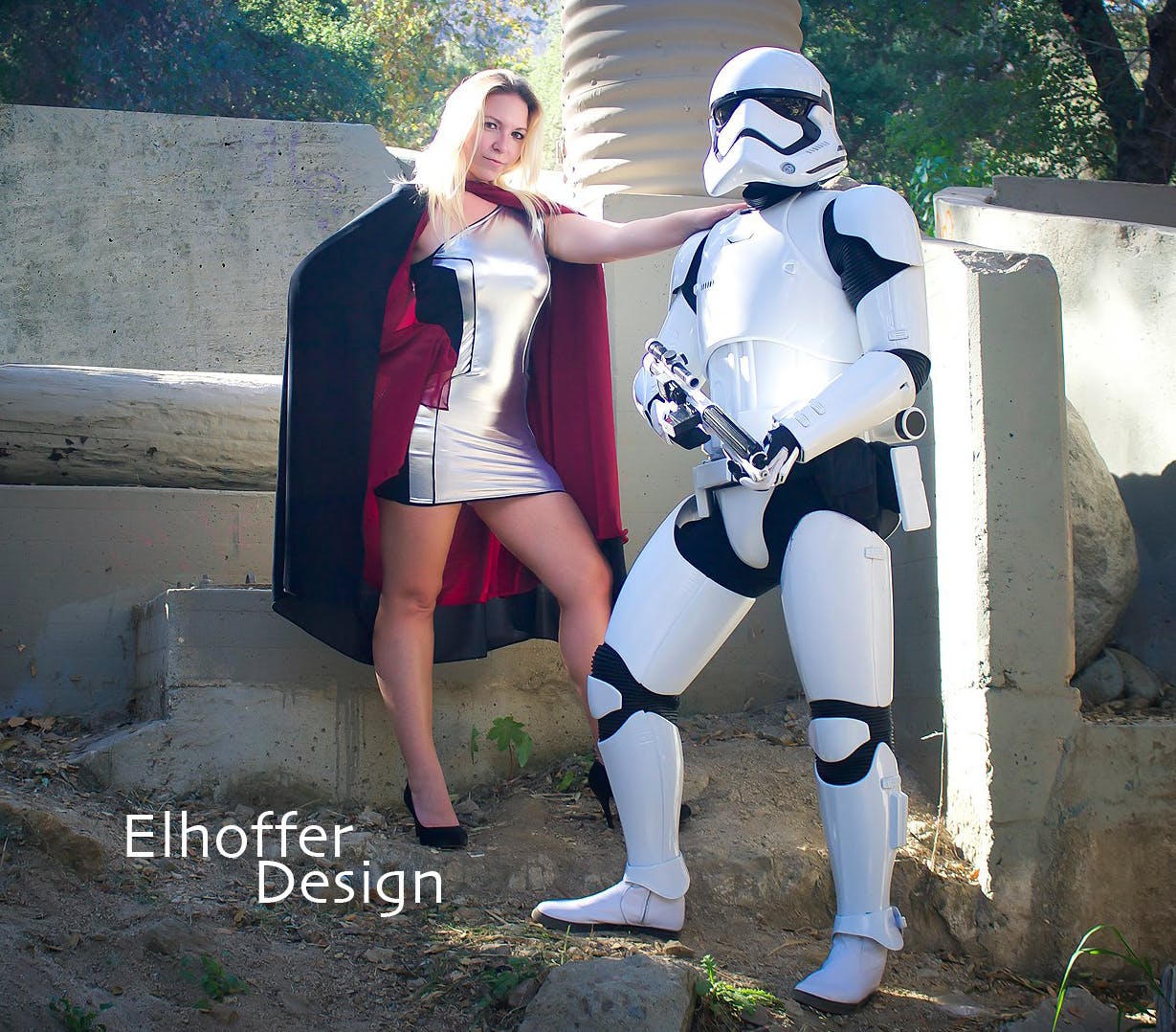 “My girlfriend who inspired the collection is photo’d with her boyfriend, who was one of the first people to build the First Order armor, which is so incredibly cool. It was so much fun walking through the park with a stormtrooper next to us!” Elhoffer said. 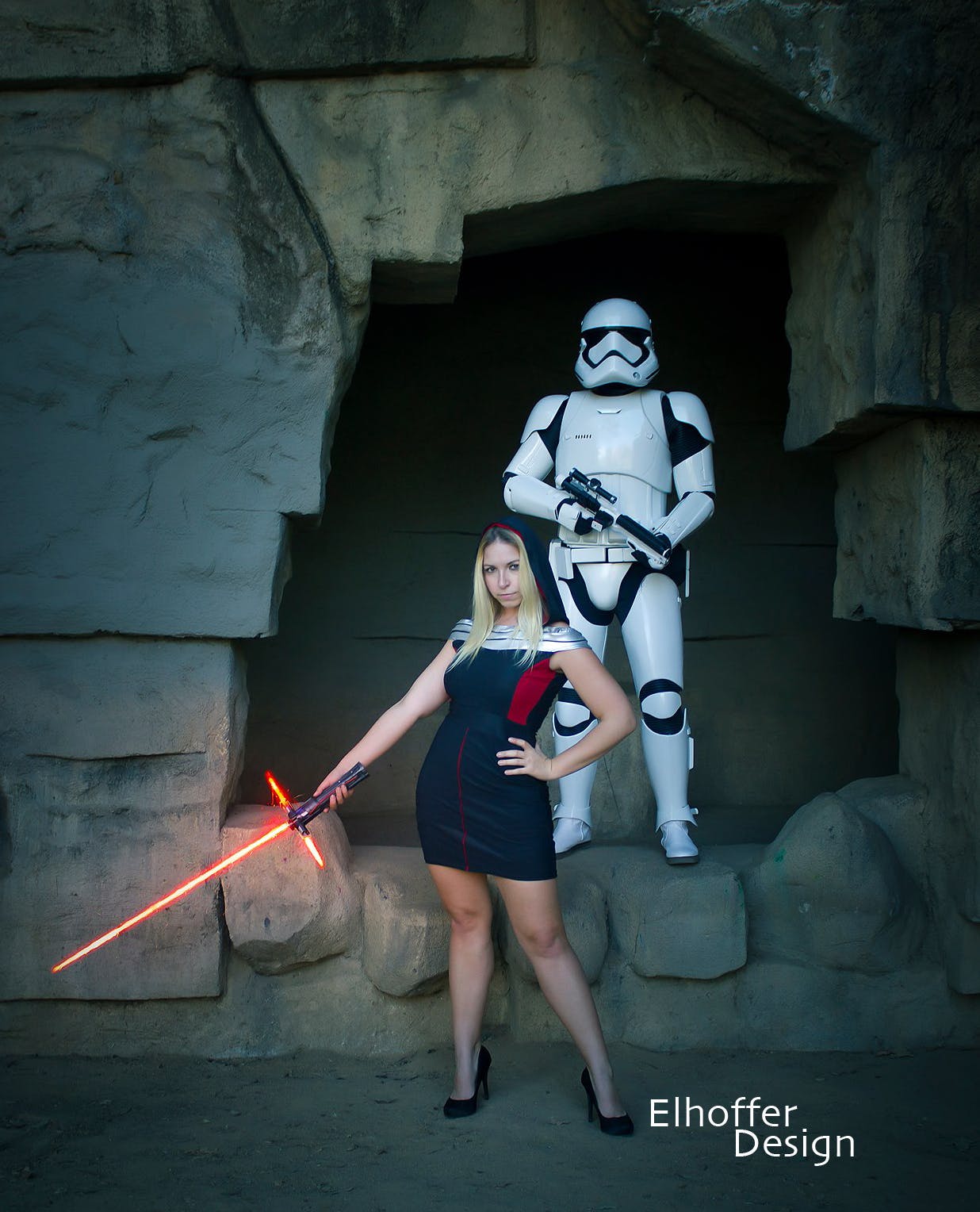 As Elhoffer mentioned, these aren’t the only Star Wars designs we’ll see from her.

“I’m already wanting to do more pieces! Finn isn’t represented, neither are any droids!” she said. “So once the movie comes out I’m going to set aside some time to make up more pieces. And I have an amazing photographer wanting to shoot my current pieces and more in a month, so I’m going to make more pieces very soon!”

Elhoffer may not be working for a company anymore, but her independent collection proves that her contribution to the world of geek fashion is far from over. Her designs are available for order, and if you’re not a Star Wars fan, she takes commissions for other designs, too.

“I hand make every piece, so I’m always looking for another idea or inspiration point!” she said.