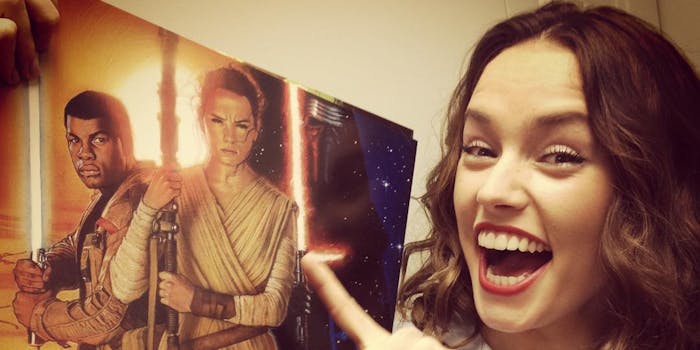 She's about to be inundated with toys featuring her likeness.

Daisy Ridley got her hands on her first Star Wars: The Force Awakens character toy this weekend, and she couldn’t have been more excited.

The 23-year-old British actress, who plays the scavenger-turned-hero Rey in the upcoming seventh Star Wars film, attended the Disney fan convention D23 over the weekend and unveiled the figure as part of The Force Awakens playset for the online video game Disney Infinity.

After the convention, she took to Instagram to geek out about seeing herself in Disney toy form.

Ridley is about to get many, many more figures of her character, and she’ll soon see her face on everything from paper plates to backpacks. No franchise has capitalized on merchandising better than Star Wars.

Ridley rejoined Instagram at the start of D23 after a long social-media hiatus. Her other recent photos show her riding Star Tours, Disneyland‘s Star Wars simulator attraction, and showing off the D23-exclusive The Force Awakens poster with her front and center.