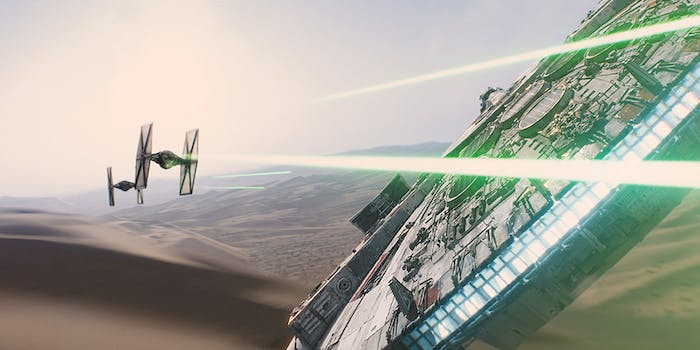 Here are the ill-fated films releasing on the same day as ‘Star Wars: The Force Awakens’

Let's face it: Sharing a release date with 'The Force Awakens' is the kiss of death.

Star Wars: The Force Awakens is clearly going to be the biggest film of 2015, if not the biggest in Hollywood history. First-day tickets sold out in record time, and the film’s total domination of IMAX screens means that movies like The Revenant won’t reach IMAX until January.

With all that in mind, we have to wonder which movies have drawn the short straw of being released alongside Star Wars—and why.

According to Box Office Mojo, Star Wars shares a release date with the Tina Fey/Amy Poehler comedy Sisters, the Chinese fantasy movie Mojin: The Lost Legend, the Hungarian WWII drama Son of Saul, and Alvin and the Chipmunks: Road Chip. Judging by this list, we can think of a few reasons why these films are going toe-to-toe with the box-office Godzilla that is The Force Awakens:

The next week sees the release of a few more major movies, including the Point Break remake, Quentin Tarantino‘s The Hateful Eight, and The Revenant.

As an action movie that plays to 1980s nostalgia, Point Break will probably suffer the most by going up against Star Wars, although its producer tried to frame this release date as “a great opportunity” because it allowed more time to work on visual effects. (In reality, having your release date delayed to overlap with Star Wars and Quentin Tarantino is probably the kiss of death.)

For the actors and filmmakers involved in movies like Point Break and Sisters, there is a silver lining to this bleak outlook. If their film bombs, they have the perfect excuse: Nothing could go up against The Force Awakens and win.