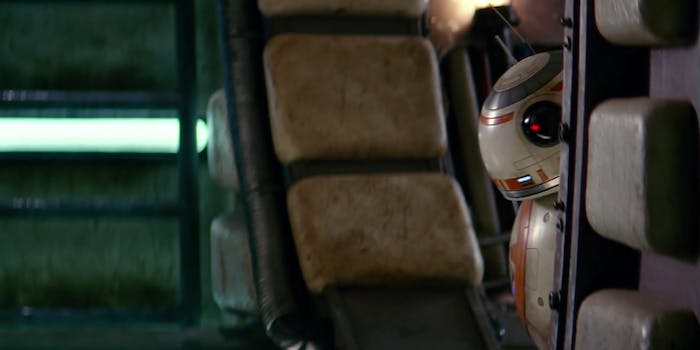 All of the new characters introduced in teasers for Star Wars: The Force Awakens have been making waves in the geek world, but by far the most charming addition to the galaxy far, far away is the droid BB-8. Now, Star Wars fans fawning over the droid will be happy to know that they can take him home this holiday season.

The quirky, adorable BB-8 stunned the world when he rolled onstage at the Star Wars Celebration convention last Thursday. It was the public debut of the physical prop that Disney had built in partnership with a startup called Sphero. By opting for a real object instead of a CGI character, The Force Awakens director J.J. Abrams hoped to make scenes with the character more realistic. Fans were amazed that they were seeing BB-8 roll around without the aid of any movie magic.

On set, BB-8 was “built on rollers and controllers by a puppeteer,” according to a New York Times story detailing the droid’s construction. But Disney CEO Bob Iger wanted to make a consumer-friendly version to sell around the time of the movie’s release. Sphero obliged, creating an iPhone-controlled BB-8 “about the size of a large Granny Smith apple” that will go on sale during the 2015 holiday season.

The Sphero website has a page for BB-8 titled “This is the droid you’re looking for” where interested fans can sign up to receive more information.

Disney did not say how much the toy would cost. Meanwhile, Sphero CEO Paul Berberian declined to explain the most puzzling engineering aspect of the actual BB-8 prop: how its head stayed on top of its spherical body while it rolled.

Fans will just have to wait for answers to that and other questions about BB-8. On the bright side, it’ll only be a matter of months before they can get their hands on the toy version.