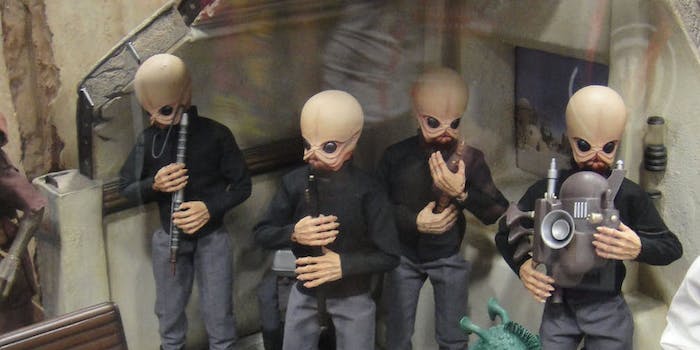 Now we can't get it out of our heads.

The Mos Eisley cantina scene from Star Wars: A New Hope is unforgettable, in no small part because of its catchy “Cantina Band” theme. So what better way for a geeky father and son to bond than by playing the classic John Williams’ composition together?

In a YouTube video shared Thursday, pianist Brian Lockard and his son play an arrangement of “Cantina Band” on the piano.

It’s a song fans have heard thousands of times before, but it’s a lot of fun to watch the hands of this musical pair work together to make it come alive.

Lockard, who once appeared on America’s Got Talent with his brother Anthony, has a number of other videos on YouTube where he plays piano including arrangements of “Concerning Hobbits” from The Lord of the Rings and the main theme from The Phantom of the Opera. This one however appears to be the first to include his son.

Photo via The Conmunity – Pop Culture Geek/Flickr (CC BY SA 2.0)