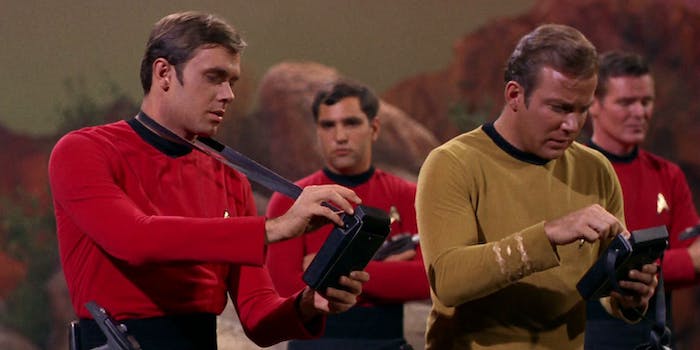 Despite what you may think, Redshirts are not doomed to death.

Every Star Trek fan knows that red-uniformed security officers are doomed to die. The concept is so well-known, there’s even a sci-fi novel called Redshirts, about a spaceship with a fast turnover of crew casualties. But does the redshirt rule have a statistical basis, or is it just a fandom legend?

Mathematician James Grime recently did a lecture about the math of Star Trek, covering topics like the Vulcan mating cycle and, yes, redshirts. Based on some earlier calculations by Star Trek fan Matthew Barsalou, redshirts actually have a lower probability of dying in the original series. That’s because while redshirts make up a higher proportion of the onscreen deaths, there were more redshirts onboard in the first place.

If you trust the Starfleet Technical Manual (yes, we’re going deep here), there’s a pool of 239 redshirts on the Enterprise. Meanwhile, there are only 55 gold-shirted command personnel. 25 redshirts die onscreen, compared to just 10 goldshirts. But when you crunch the numbers, that’s about 10 percent of the redshirts, and 18 percent of the command crew.

Of course, these stats are only useful if you’re personally planning to enlist in Starfleet. You now know that it’s safer to join the command crew than the security team. But the redshirt rule still holds true when watching the show, because more of them die onscreen.

Plus, there’s a certain poetic truth behind the idea of redshirts. If Kirk and Spock beam down with a single anonymous crewmember, that guy is spiritually a redshirt, regardless of what color shirt he’s wearing. He’s cannon fodder, and he won’t be around for long.