Dorothy “D.C.” Fontana has been with Star Trek since the beginning. Working as a writer and script editor for the original series, she wrote memorable episodes including “Charlie X,” “This Side of Paradise” and “Journey to Babel,” which introduced Spock’s parents.

Fontana went on to write for Star Trek’s animated series and the first season of The Next Generation, along with an episode of Deep Space Nine and Star Trek tie-in materials including video games and a novel. Alongside writers like Gene Coon, Harlan Ellison, David Gerrold, and (of course) Star Trek creator Gene Roddenberry, she was instrumental in shaping the legacy of the franchise.

In conjunction with the release of Star Trek’s 50th anniversary TV and movie box set, we spoke to Fontana about her work on iconic episodes. (Editor’s note: This interview has been edited for clarity and length.)

You worked on several Spock-centric episodes including “Journey to Babel.” What drew you to that character specifically? Could you tell me one of your ideas for Spock that you’re particularly proud of?

I worked for Gene Roddenberry on [Marine Corps TV show] The Lieutenant, and in early 1964 when we knew The Lieutenant was being canceled, Roddenberry called me into his office, handed me a 10-12 page document and said, “Read this and tell me what you think.” It was called Star Trek, and it was the USS Yorktown, it was Captain Robert April, but there was this interesting Martian man named Mr. Spock. I liked it very much; I thought it had lots of possibilities. When I went back to him and told him this, the next question I had was, who plays Mr. Spock? And he pushed a picture of Leonard Nimoy across the desk at me.

“I liked the idea of being able to poke into this character and see what made him tick.”

Leonard had done a guest star role on The Lieutenant, and in 1960 when I filmed my first first story for television, The Tall Man, the guest star was Leonard Nimoy. So I had known him since 1960, and I was delighted to hear he would play Mr. Spock.

He was an interesting character, but in the first episodes he was very closed-off, very tight. Who was this guy? So I liked the idea of being able to poke into this character and see what made him tick, which was one of the things I was able to do in “This Side Of Paradise.” It allowed us to strip away the Vulcan because of the effect of the spores on the character and see who he was behind that iron Vulcan mask. And we liked him! He was fun! He could see beautiful figures in the clouds; he could express love for Leila Kalomi, played by Jill Ireland; he told Kirk, that was the only time I was happy. 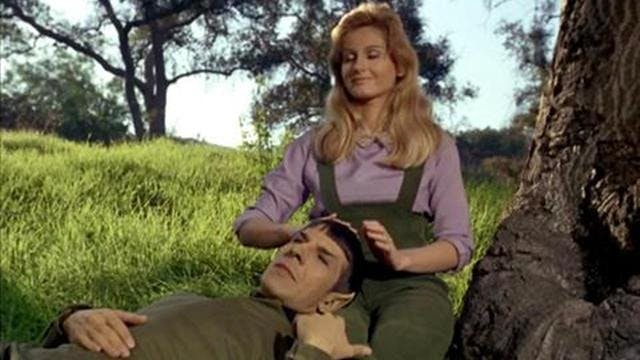 This Side Of Paradise/Star Trek

He does mention at the end of “This Side of Paradise” that his father was a Vulcan ambassador and his mother was a schoolteacher, but it was an almost off-the-cuff thing. But the more I thought about it, the more I said, I want to explore who that is, which prompted “Journey to Babel.”

I was interested to watch “Journey to Babel” after the 2009 Star Trek movie, because it seemed like the new Spock was heavily influenced by that idea of a human-Vulcan hybrid. Did you see that movie?

No. Honestly I barely remember the movie. But I hadn’t seen anything after film number six, really. So I didn’t have much thought about it. I did do Vulcan’s Glory, which is a novel, and it again involves Sarek and Amanda on the Enterprise and a mission going down and a murder… And also did something on the Star Trek animated show, “Yesteryear,” which took Spock back to his childhood and introduced his parents then, and how Spock was as a child, and why he became more Vulcan.

When you and the other writers were conceiving of the early original series storylines, were you inspired by other sci-fi of the time?

Well, we were telling stories about the human condition on Earth, really, under the guise of discovering new civilizations and going where no man has gone before. But we were doing stories about racism and sexism and political aspects of what was going on in our country and around the world at the time. Also the Vietnam War, which nobody could talk about. We could, under the guise of science fiction. And sometimes stories were just purely personal. 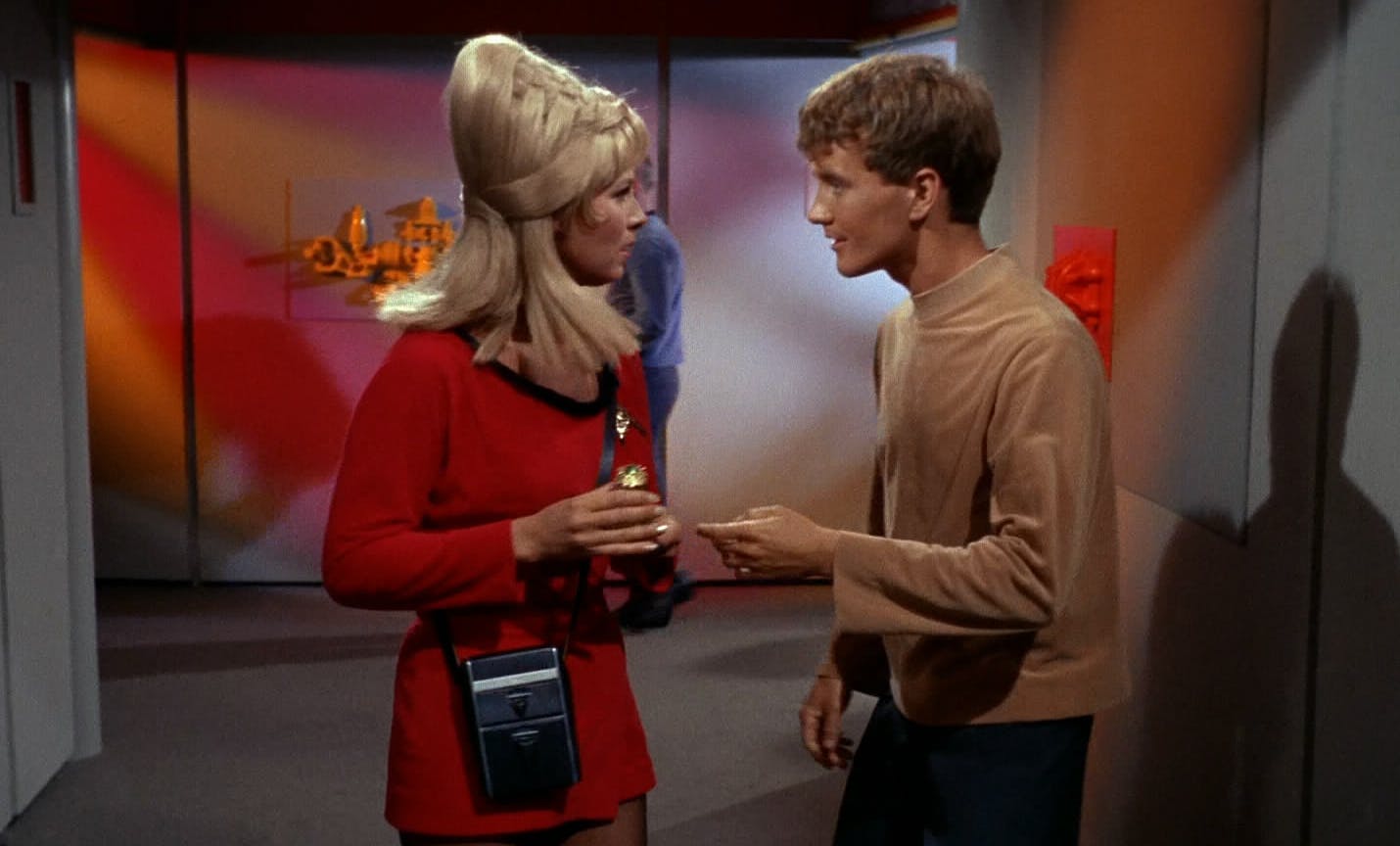 One I did, “Charlie X,” was about this boy who was raised by aliens and didn’t know how to be a human being; he had never been raised or trained that way. He was only trained to survive, but he didn’t know how to react to other people, how to interact with people. And how many times do we meet people exactly like that these days? So we were trying to tell stories about human beings in unusual circumstances but also stories about what was going on in our world. And I think we did some pretty darn good stories on that level.

Could you tell me a bit about the creative process at the beginning of The Next Generation? When you were drafting the pilot script with Gene Roddenberry and conceiving the characters?

We had talked a lot about who they would be, and the [show] bible did exist on paper at least. We didn’t yet have casting because to have casting you had to have a script.

I wound up writing a script called “Encounter at Farpoint,” which was primarily about the mystery of [Starbase] Farpoint, and introducing our characters. Gene Roddenberry later added the “Q” line, and that’s how it was written by the two of us. Q, of course, became a popular character and came back about six times over the course of the series. John Delancie did a wonderful job.

But it was evolving as we were talking about it and saying, “Oh, we can’t afford to do this;” you’re making production adjustments while you’re writing the script. The actors actually came in later. I didn’t know what they would look like. We did go for the older captain, that was [Star Trek writer] David Gerrold’s suggestion. He didn’t always go down with the landing party like Captain Kirk did.

In “Encounter at Farpoint,” we were putting the whole crew together, so in a way, we were meeting all the characters not established yet. That was the beginning of that version of the Starship Enterprise and its crew, whereas with the original Star Trek, the characters were already there and we worked with them. Both different situations and a different kind of writing, but we had a good time and I think the cast and crew were very good.

At what point did you realize this was more than just another writing job, and Star Trek had evolved into something bigger?

We knew it from some of the mail, but the conventions were what really made us know, our following was strong with women.

We could see the original series grow as we did it. We knew we were gaining fans; it was amazing. The first week we were on, we had a bag of mail. The second week, we had three bags. The third week we were on we had a ton of mail. I mean, it really started coming in. We couldn’t handle it; it had to go to either the network, or to the actors if it was addressed to them, or to a company that would handle the general mail for us.

If it raised specific questions they’d bring it back to us, but we knew right away in that world of letters, not online and not on computers or anything like that, but letters that came across the threshold, we knew that NBC was getting the idea. And I think that’s what kept us on for three years.

Were the people working on Star Trek surprised by how many women were excited about the show? I feel like nowadays there’s a certain inaccurate image that Star Trek fans were quite male-dominated, but at the time I believe a lot of the fanbase were women, and obviously you were heavily influential on the show.

Fontana: Well, we knew there were a lot of women because we were seeing some of that fanmail. But also the first convention [in 1969], when we went, we realized this audience is at least half women. This is really cool! We’re attracting young married women, young professional women, college students, high school students. A lot of them were women. We knew it from some of the mail, but the conventions were what really made us know, our following was strong with women.

We were getting not just “Oh I love Mr. Spock” or “I love Captain Kirk, send me a picture”—we got some of those—but others were more intelligent. They were discussing the episodes; they were saying, “I’m a college story majoring in some science or technology or whatever, and I want to know about this.” The mail we were seeing was telling us, we’ve got a smart audience out there and they’re not just kids. They’re not just science-fiction fans. It’s a broad range of people who like this show and are attracted to it.

SEE ALSO: I watched Star Trek for the first time