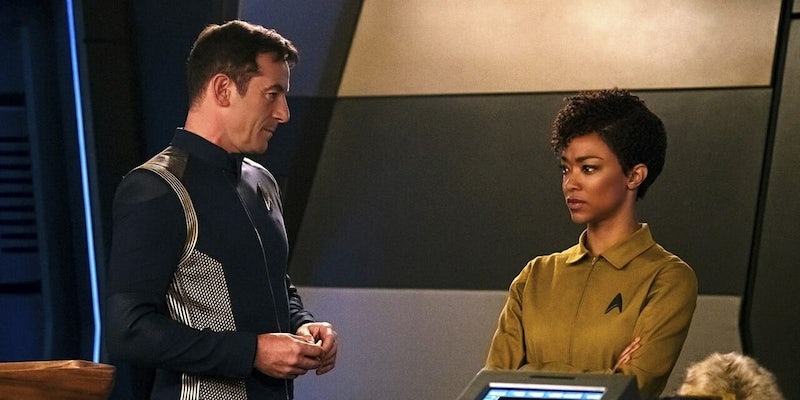 Six months after the battle at the binary stars, Michael Burnham shoulders the blame for war with the Klingons. As a high-profile mutineer she’s a convenient scapegoat, although in truth her mutiny made little impact. The Klingons caused those 8,186 Starfleet deaths, but in the midst of her grief for Captain Georgiou, Burnham welcomes a lifetime of punishment.

“Context is for Kings” acts like a second pilot episode, introducing the crew of the U.S.S. Discovery. The militaristic Captain Lorca (Jason Isaacs) conscripts Burnham from prison, recruiting her for a mysterious project in the ship’s engineering deck. Fungus expert Lt. Stamets (Anthony Rapp) is her new boss, a disgruntled academic whose research was co-opted for the war effort.

From Khan to the Borg Collective, this story follows an ongoing theme in Star Trek: the misuse of scientific innovation for destructive purposes. Burnham and Stamets both see Starfleet as a peaceful exploratory fleet, while Lorca is a ruthless tactician. Under his command, Discovery lacks the cheery, collegiate atmosphere of Georgiou’s U.S.S. Shenzhou. Armed security officers line the corridors, and Stamets’ experiments routinely cause an ominous ship-wide warning: “Black alert.”

Despite her determination to suffer for her crimes, Burnham can’t resist a good mystery. She breaks into Stamets’ lab to discover a glittering forest of space fungus, and winds up joining a retrieval mission to the U.S.S. Glenn. As the Discovery’s sister-ship, the Glenn lost its entire crew to a more ambitious evolution of Stamets’ work. The crew’s corpses are warped beyond recognition—a far more disturbing sight than the alien monster who arrives to attack our heroes. At the risk of sounding puritanical, it’s a little sad to realize Star Trek is no longer entirely suitable for kids.

Thank god for the living emoji Sylvia Tilly (Mary Wiseman). We need someone lighthearted to balance out the darker moments, so the showrunners gave Burnham an enthusiastically awkward young roommate. While everyone else onboard is a hardened officer, Tilly is a fresh-faced and earnest cadet. She’s funny without the broad comedy of Star Trek’s more dubious comic relief characters, giving Burnham someone to mentor when she joins the crew.

Stamets turns out to be working on a transportation system, harnessing pathways of spores between the stars. That’s less frightening than the superweapon we expected, but it’s still dangerous and rife for misuse—especially with Lorca in charge. “Universal law is for lackeys,” he tells Burnham, dismissing her criminal convictions and personal guilt. “Context is for kings.” Square-shouldered and unshakable, he’s confident that ends justify the means. An immediate contrast with Georgiou’s thoughtful flexibility, and an obvious foil for Burnham’s almost religious dedication to Starfleet ethics.

Jason Isaacs specializes in controlled menace, playing Lorca as a manipulator with a talent for stagecraft. His first scene is positively theatrical, posing to face the window as Burnham enters his gloomy office. It’s spartan compared to Georgiou’s carefully decorated room, and at the end of the episode we find out why. His prized possessions are alien specimens, including the monster from the U.S.S. Glenn. In an era in which meat is replicated instead of farmed, this already goes against Federation standards. Worse still, Lorca’s menagerie includes a skeleton from a sentient, spacefaring race—the Gorn. At this point, you have to wonder about Jason Isaacs’ career choices. This is his third role in a row where he locks people in tanks for weird experiments: an enigmatic kidnapper in The OA, an eel-obsessed physician in A Cure For Wellness, and now this. Stick with your strengths, I guess?

We’re off to a grim start, but Discovery retains Star Trek’s hopeful mood in troubling times. Burnham’s spirit and integrity shine through, and Star Trek’s sense of wonder is present in Tilly’s optimism, Stamets’ poetic view of the galaxy, and the simple awe of the U.S.S. Discovery emerging from a starlit cloud.