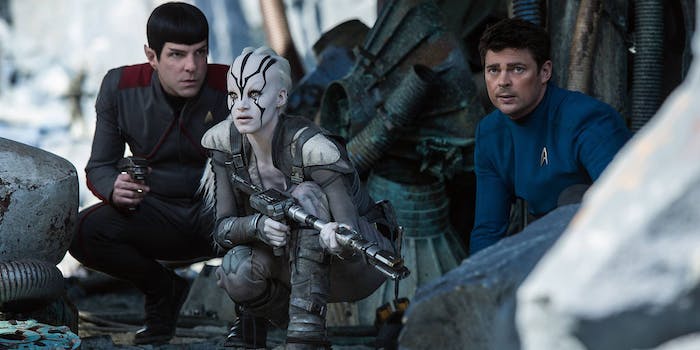 It's like a James Bond power ballad, but it totally works.

Rihanna hinted on Sunday that her new song, “Sledgehammer,” would soon be online. As of Monday morning, you can listen to part of it in the new trailer for Star Trek Beyond.

“Sledgehammer” recalls a James Bond power ballad, which traditionally wouldn’t be a great fit for Star Trek, but totally works with the new reboot movies. Directed by the Fast & Furious franchise’s Justin Lin, the modern Enterprise crew members seem like people who listen to Rihanna.

For Star Trek fans, the new trailer doesn’t bring much new information about the film. The voiceover suggests dangerous times for Kirk and the crew, which isn’t exactly shocking news, so the real focus is on how “Sledgehammer” adds some emotional weight to Kirk’s words.

Star Trek Beyond comes out on July 22, featuring “Sledgehammer” on the soundtrack.