Leonard Nimoy's son is hoping fans will fund 'For the Love of Spock' in its final days on Kickstarter.

In November, Adam Nimoy approached his father with the idea of making a Spock documentary.

Just the year before, he and his dad (yes, the Leonard Nimoy) filmed a documentary called Leonard Nimoy’s Boston about the Star Trek star’s life growing up in the west end of the city. That project and the upcoming 50th anniversary of Star Trek: The Original Series in 2016 made Nimoy feel like this was the perfect time to take a closer look the loved half-Vulcan, half-human member of the Star Trek family. His father was enthusiastic about the idea.

“We immediately started talking about what the scope of the project would be like, what our intention was, what our goals were, and how we were going to kind of explore the creation of Spock and the evolution of Spock as well as his impact on pop culture and the forces that have kept Spock alive— the fan base and new media that has kept Spock in the public eye for the last 50 years,” Nimoy told the Daily Dot. “So it originally started off really as just a desire to collaborate with him on a subject we both felt passionate about [and] to kind of give a gift to the fan base to help celebrate 50 years of Trekdom.”

These plans for the project changed when Nimoy’s father passed away in February. While his father wanted the project to be all about Spock and not focus on his own career, Nimoy said that changed when he saw the outpouring of emotion from fans around the world mourning not just the loss of Spock, but the loss of his father “the actor, the artist, the social activist, the humanist.” That’s when he realized the film needed to also focus on the life and legacy of Leonard Nimoy.

The film, For the Love of Spock, will be more personal as a result, exploring not just the actor’s life but how his success impacted his family. Nimoy said the fact that Star Trek took the actor away from the family for a lot of time was an issue. Even the enthusiastic fan base his father spent time engaging with had an impact on their lives, though it didn’t effect how he as a kid felt about the science fiction series. 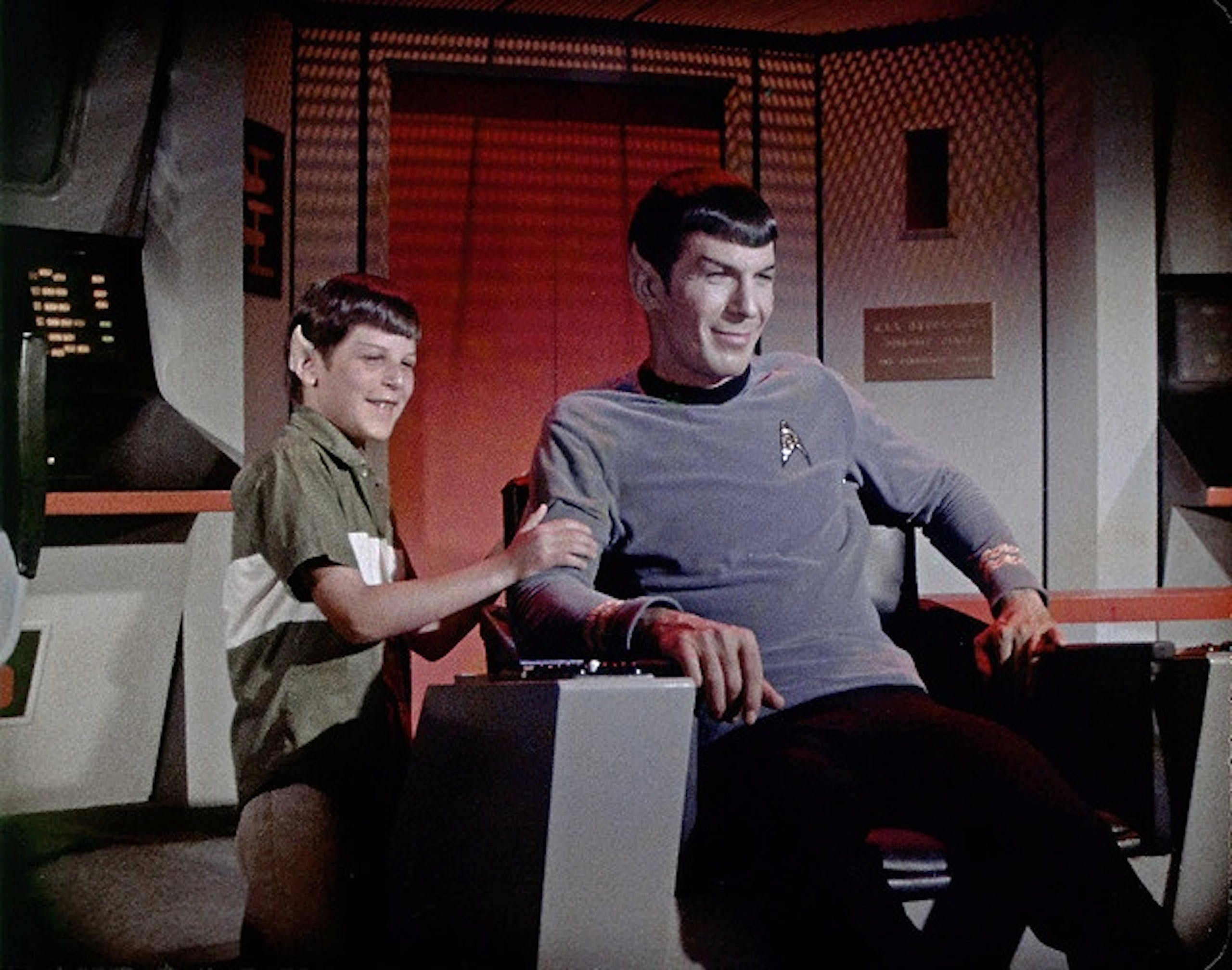 “We couldn’t do family outings anymore. We were always being mobbed by people. That took a lot of adjustment, but I was completely enthralled with the show. I was a complete fan of the show from the get go,” Nimoy said. “I was on the set watching him make that show before it even aired and I was a complete fan. I’m maintaining now that I’m the very first Trekkie and I still use the word Trekkie because that’s what I knew from back then. Most people like to identify themselves as Trekkers now. ”

As a 10-year-old, comic-book collector, and avid TV viewer who was a fan of shows like Lost in Space and Outer Limits, Nimoy loved how unique Star Trek was.

“There was really not that much sci-fi on at the time so I loved watching dad. I loved Spock immediately. I loved the dynamic between Spock and Kirk and McCoy. I was just fascinated and we watched it every Thursday night when it was on the air that first season. We watched it together as a family,” he said. 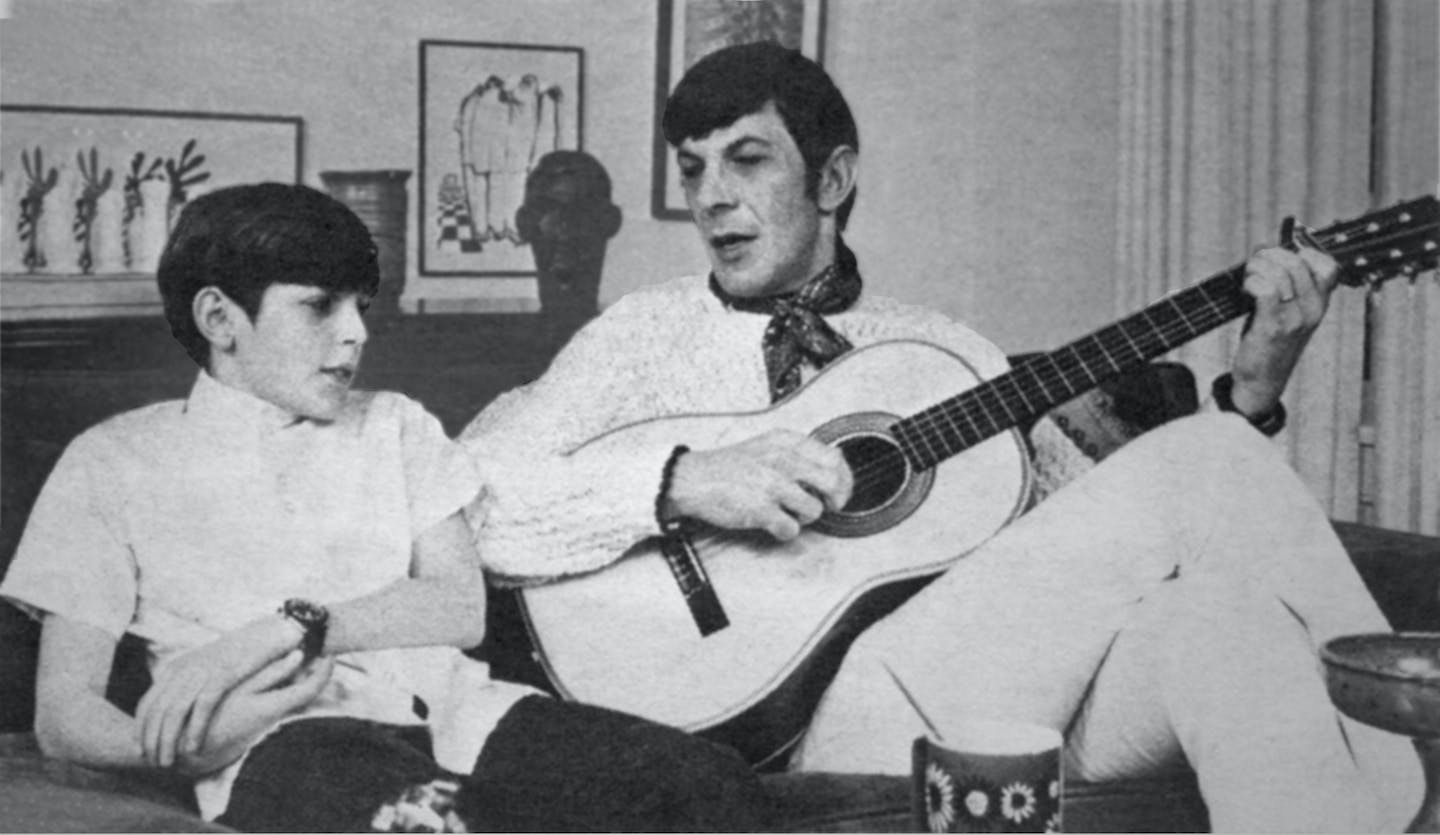 His father’s illustrious career had a big impact on Nimoy’s own decision to enter the entertainment industry. At first he wanted to go in the opposite direction and went to law school in order to have a steady job and income since he remembered his father’s struggles as an actor. However after seven years of practicing law he discovered he had no passion for it. He took an acting class between legal jobs that was taught by his father’s old acting teacher, Jeff Corey. It inspired him to become a director. His father was very supportive of the idea.

“We talked about career transitions and one of the things he told me to do was stay in that class to get some experience about the actor’s craft so that when I would start directing I could have some tools to communicate and collaborate with actors,” he said.

Since then Nimoy has worked in both film and television, directing episodes of shows like Star Trek: The Next Generation, Babylon 5, and more. Now he’s turning those skills to the documentary about his father and Spock. He announced his plans to make the documentary in March and launched a Kickstarter campaign to help fund it in June. He’s already conducted interviews with Original Series actors William Shatner, George Takei, and Walter Koenig for the documentary. 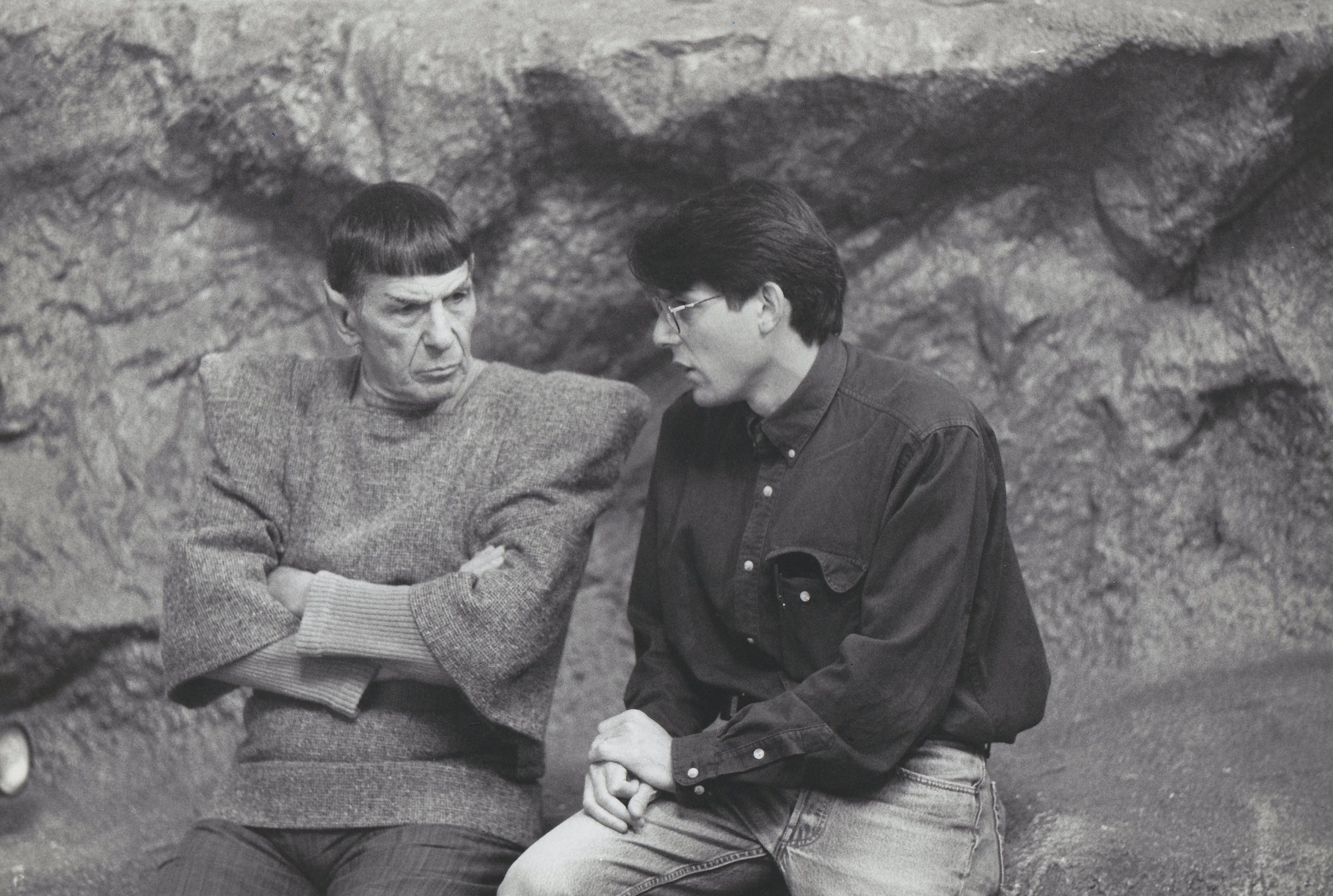 “What was interesting to me was the intensity of emotion that we experienced in the interview process with Bill and George and Walter, particularly with Bill Shatner who had a lot of love for my dad,” Nimoy said. “They had a very close relationship that had its ups and downs, as most friendships do, but Bill’s feelings of love towards my dad were really refreshing and powerful and transformative for me to hear.”

Nimoy was also surprised by how Shatner stepped up to spread the word about the Kickstarter on Twitter and even signed photographs to be given as rewards for backers.

The campaign is now in its final few days but hasn’t reached its goal of $600,000 yet. Nimoy is surprised that they aren’t further along in fundraising by now. He believes the Star Trek fan community has “been slow to come around to the campaign,” which has been surprising for him since he sees the film as also being about and for the fanbase.

He told the Daily Dot that he appreciates the support of the fans who have reached out to him since his father’s death and at the beginning of the Kickstarter. According to Nimoy, the fans that contact him seem to fall into two groups in how Spock impacted their lives. For some, it’s in how he’s an outsider.

“We were able to identify with Spock, and yet Spock was still cool.”

“My dad reminded me just before he passed that Spock was the only alien on the Enterprise bridge in that core crew, the only alien, and as such he’s an outsider immediately and his whole character is different from everybody else,” Nimoy said. “He was different so people who don’t perceive themselves in the mainstream of society who are treated or they identify themselves as being a little bit outside, whether they’re nerdy or loners or ahead of their time or too mature for their social group, whatever it is. If they saw themselves as being a little bit on the outside and away from the herd as did I quite frankly then we were able to identify with Spock, and yet Spock was still cool. He was still integral to the success of the mission of the Enterprise and the Enterprise crew. He was such an important personality that Captain Kirk and the crew relied on for help, for information, for decision making so that was what really appealed to me.” 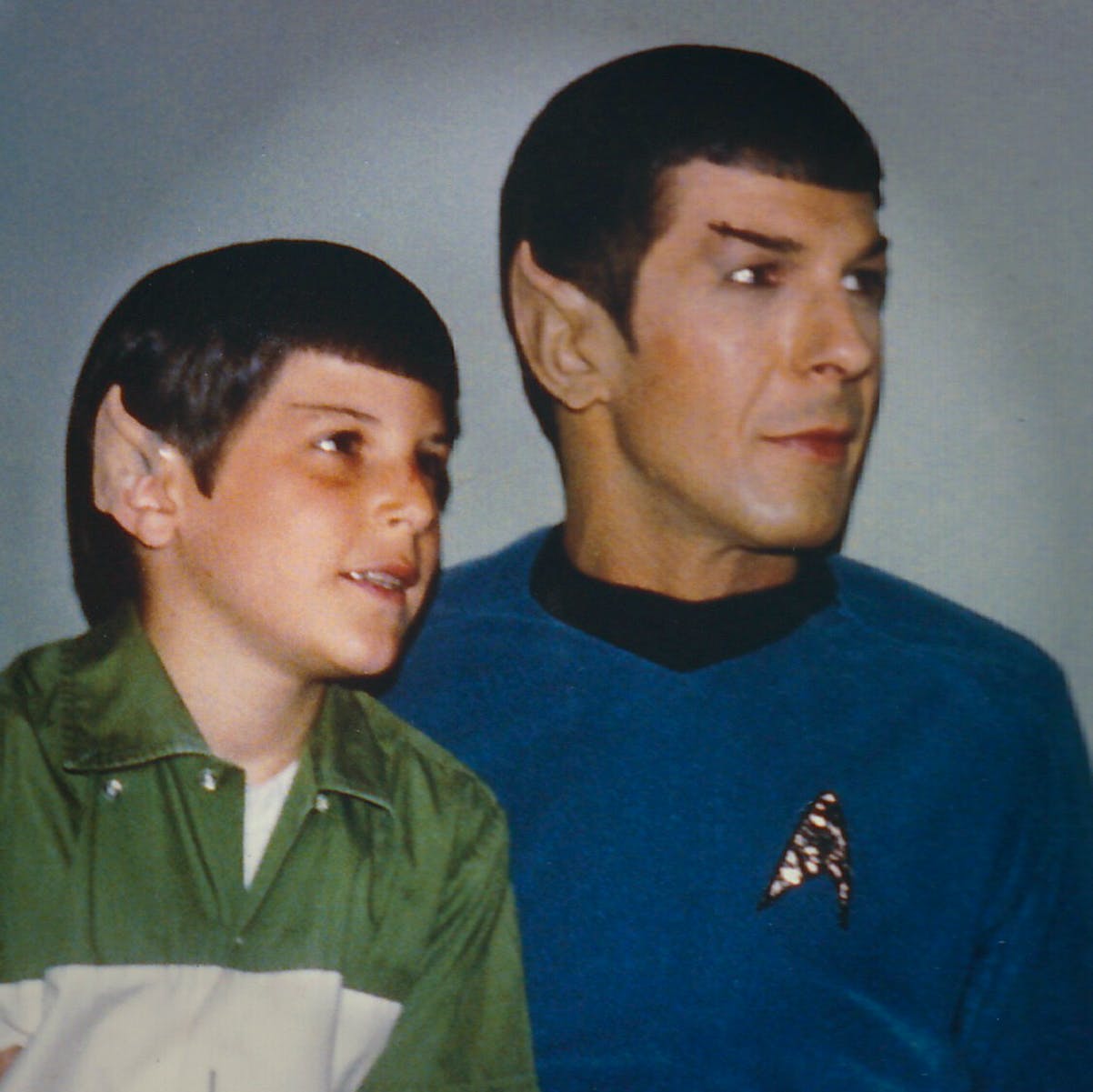 Nimoy also sees people identifying with Spock trying to control his emotions and not letting them get the best of him. He said he sees this with young people in particular.

“Spock was a master of that because he had the benefit of being half-Vulcan, which was the logical side to help keep things in balance and control. We’ve all been through that, about trying to control emotional outbursts, and our first impulse to act out and then feeling later immediately thereafter the guilt about having reacted that way immediately when it would have been better to sit back and hold on and contemplate and really make a cool-headed decision about what’s the most appropriate thing to do in any given situation. And that’s who Spock was. So he was very inspirational on that front as well,” Nimoy said.

Leonard Nimoy’s impact as Spock and beyond will be explored in great detail if the documentary is funded. It’s one of the many reasons Nimoy sees the documentary as an important film to make.

Learn more about the documentary and how you can contribute to the campaign on Kickstarter. As of publication time, it’s just about $50,000 short with two days left to go.