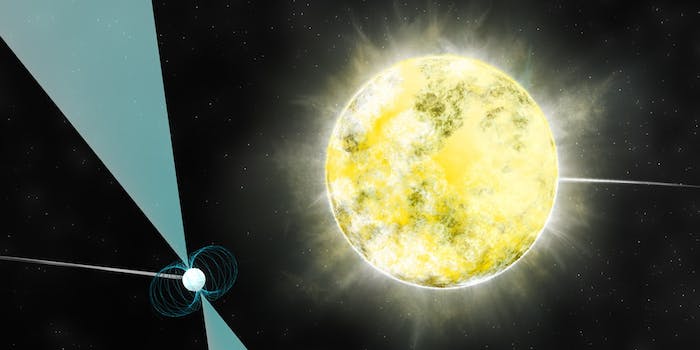 Scientists have discovered a diamond star

The 11 billion-year-old star is one giant diamond.

Once the size of our Sun, there’s a star that burned through its fuel, cooled, and contracted into an Earth-sized object called a white dwarf, made of crystallized carbon. In other words, it became a star made of diamond.

A team of scientists announced their discovery of the diamond star this week in The Astrophysical Journal. It is the coldest, faintest white dwarf star we know. “It’s a really remarkable object,” said David Kaplan, a professor at the University of Wisconsin-Milwaukee in a news release. “These things should be out there, but because they are so dim they are very hard to find.”

The team could have looked for a diamond star, an object that other researchers have predicted would exist, but they wouldn’t have found one without knowing something about the way that gravity works. They discovered the white dwarf by measuring how much it tugged on its neighbor, another type of stellar object called a pulsar.

Pulsars are the rapidly spinning remains of a once-massive star that exploded in a supernova. Beams of energy radiate out from their poles and sweep through space like a lighthouse’s rays. Our telescopes catch the beams as pulses of energy. Astronomer Adam Deller recorded those pulses for two years using the Very Long Baseline Array, an array of 10 radios telescopes spread over 5,351 miles. His observations pinpointed the pulsars location to about 871 light years away, making it one of the closest pulsars ever recorded.

But something weird happened when researchers looked at the timing of pulses from the pulsar named PSR J222-0137. Science writer Nadia Drake explains:

“The pulses arriving at Earth were periodically delayed, as if some unseen companion were causing the pulsar’s radio emission to take a somewhat circuitous route to Earth. This can happen when an orbiting, massive companion’s gravity messes with the fabric of space, causing things like light and radio waves to travel along twisted pathways.”

The team looked for the pulsar’s companion with several telescopes that should have found something, but they saw nothing. They looked in optical and infrared wavelengths. Nada. By process of elimination they figured out that the companion must be a very cool, very dim white dwarf star.

Such a star would be mostly crystallized carbon, or very close to being a giant diamond. This diamond star is just approximately 3,000 degrees Kelvin or 4,940 degrees Fahrenheit. Not chilly, but about 5,000 times cooler than the center of the Sun.

An artist gave the white dwarf star and its companion pulsar life in an illustration (above). The star’s dimness makes it hard to find others like it, but the scientists behind this discovery think there could be many more diamond stars in the sky.