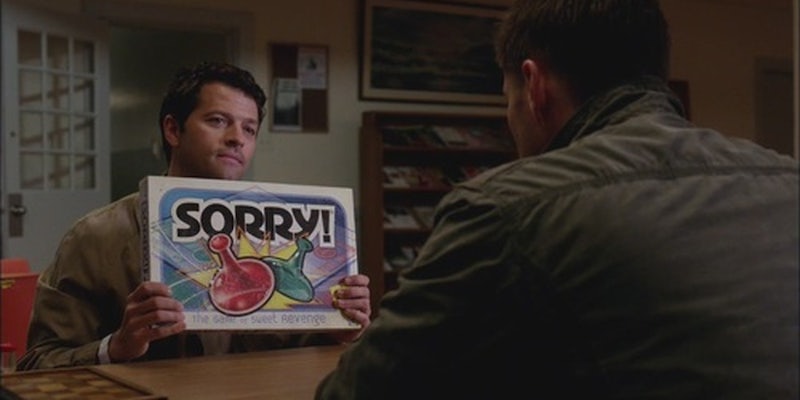 ‘Supernatural’ fandom gives the CW a lesson in Twitter PR

Note to the CW: You tweet what you sow.

It might be summer, but the CW, the network responsible for some of the biggest fandoms around, including Supernatural and The Vampire Diaries, isn’t taking a break. In fact, this week on Twitter, CW executives, or at least the people who run their social media accounts, have been getting thoroughly schooled in the ways of fandom and social media—and the dangers of inviting fans to talk back.

#AskSupernatural Any show recs for new shows to watch, since I won’t bother with this one anymore?

On Tuesday, the network launched a series of Twitter hashtags for various shows, inviting fans to submit questions to be answered by the casts and crews at San Diego Comic Con. After a deluge of responses, the network eventually deleted all but two of the open requests:

Among the hashtags whose official announcements were deleted are #AskTVD, #AskTheOriginals, and #AskSupernatural. Particularly in the case of Supernatural, the CW’s ploy backfired; thousands of fans who were angry and upset with the network deluged the #AskSupernatural hashtag for days with snark, challenges, and critical questions, which seemed to far outnumber more innocent questions about the show’s narrative.

So many fans joined in that #AskSupernatural trended worldwide on Tuesday and then again on Wednesday, and shows no sign of stopping today. Numerous fans compared it to the equally ill-fated #AskRobinThicke:

Are you all starting to regret the #AskSupernatural tag? Did #askrobinthicke teach you nothing?

The vast majority of SPN fans joined in to criticize the show’s oft-noted ongoing issues: cyclical plots, problematic tropes, and above all the sustained refusal to give Dean and Castiel, or “Destiel,” an explicitly acknowledged romance.

#AskSupernatural when will we get something other than “one bro has issues, other wastes season trying to save him, Cas in angel wars”

#AskSupernatural Do you realise that a large portion of your fans are queer and female? Do you have ANY interest in pleasing them?

#AskSupernatural How do you write two characters in classic romantic tropes and then declare NO HOMO?

#AskSupernatural do you think women are witches?

#AskSupernatural You made Charlie canonically lesbian & still just implied her relationship with Dorothy cause subtext is your thing, huh?

HAHA! RT @angel_kist: #AskSupernatural do you realize our expectations for S10 are so low, Hell is our upstairs neighbor?

#AskSupernatural There has been 3 bestiality references in supernatural that I’ve managed to catch. Would a kiss between 2 men really hurt?

#AskSupernatural Do you believe bisexual Dean would ruin the show? How would you explain that to queer viewers?

#AskSupernatural Why did you kill Kevin? Why get rid of Charlie? Can you be on this show only if ur a straight white male?

Most of the constant refrain of criticism stemmed from SPN’s status as the whitest, manliest, straightest show ever to have inexplicably cultivated a fandom that is its demographic polar opposite. But in between the social justice and ship-related concerns were more practical questions about the plot of the show itself:

@cw_spn #AskSupernatural is Adam ever gonna get out of the cage?

@cw_spn #AskSupernatural also, how can you explain me how in 8×01 Dean has been in Purgatory and still has a better haircut than Sammy HOW

#AskSupernatural would it kiLL YOU GUYS TO SAY CHRISTO ONCE IN AWHILE. OR EXCORCISE DEMONS RATHER THAN KILLING THE VESSEL. ;-;

Fans were also quick to respond to the CW’s deletion of the original invitation to use the hashtag, though there’s no indication that it was due to the nature of the questions and not simply the overwhelming number of responses:

#AskSupernatural Voicing your complaints and concerns is NOT hate. People are asking the Qs they want answered, even when theyll be ignored.

The Daily Dot also got some appreciation from fans on the hashtag:

#AskSupernatural how do you feel about the fact that articles like this exist and that they are 100% right https://t.co/lJGZwCvMfF

Elsewhere, fans of The Vampire Diaries and The Originals also had their own particular complaints:

If Damon comes back to life and reunites with Elena what are the possibilities of seeing their reunion happen in the rain? #AskTVD

#AskTheOriginals #AskTVD Why didn’t Elijah go see Katherine when she was dying? Because it really made him look like a D bag.

Yikes! Looks like the CW can’t catch a break. It’s a good thing we love their shows so much. And after all, they do say disagreement is the highest form of respect.