Splatoon proves Nintendo has the chops for online shooters

Nintendo finally has a first-party game on the Wii U that isn't aimed squarely at Nintendo fans.

I first realized Nintendo had succeeded in its goal of making an online multiplayer shooter when I grumbled bitterly about no one attacking the enemy’s right flank.

The isometric-view minimap on my GamePad showed where my team had splattered the ground with orange ink, and where the other team had splattered the ground with blue ink. The goal was to ink more of the map than the other team by the end of the match. The clock was ticking down. The entire right side of the map was covered in blue, and the orange squid-shaped icons that designated my teammates’ positions were all clustered around the left side of the map.

Maybe if one damned person shifted to the right we could throw the enemy off-balance, force them to stop their advance, and retreat as they looked down at their minimaps and saw orange ink spreading behind their lines. I wished I was playing with three of my gaming buddies on a voice channel so our entire four-person team could coordinate properly.

When I started thinking about which of my friends owned a Wii U so I could convince them to buy a copy of Splatoon and press them into service, I knew Nintendo had succeeded in creating a multiplayer shooter with core gamer appeal without sacrificing what makes a Nintendo game special. 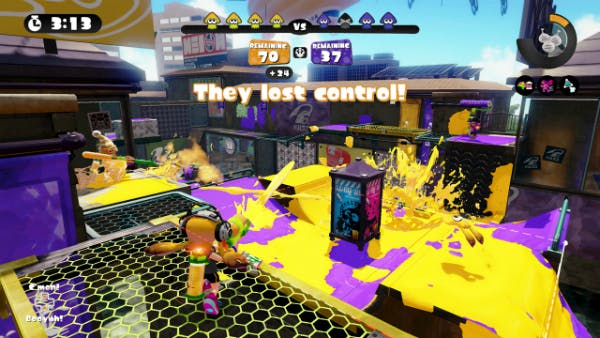 Players in Splatoon are Inklings, creatures that have the ability to transform from humanoids into squids that can swim across the ground, and who live in the city of Inkopolis. Turf Wars are one of the city’s favorite pastimes, this being the narrative setting for Splatoon’s multiplayer matches.

Everyone in the city is very concerned with their “freshness.” The art design and soundtrack in Splatoon carry the same sort of skater punk/hip-hop vibe that Sunset Overdrive was going for, but without trying so hard as to be a turn-off.

Each team of four Inklings in a Splatoon multiplayer match have three minutes to cover as much of the map with their color ink as possible, spraying over each other’s ink to seize control of that map space back from the enemy.

Most of the weapons in Splatoon resemble Super Soaker water guns: giant plastic tanks of liquid atop a plastic gun colored in Day-Glo yellow and orange. Players can upgrade from a machine gun-style ink spraying weapon, to paint rollers that rapidly cover the ground in ink, or de facto sniper rifles called “chargers.”

Weapons have secondary and special firing modes. The basic secondary is a pyramid-shaped grenade that splatters ink when it detonates. Special weapons charge up over time and are accordingly powerful. The Inkzooka special, for instance, fires a tornado of ink across the map.

Splatting enemies with ink knocks them out of the game for a few seconds before they respawn. If you get knocked out, the default respawn location is your team’s end of the map, but you can also select a teammates’ position as your respawn point, and be catapulted there across the map.

You can turn into a squid and sink into the level in order to launch stealth attacks, popping out of the ground to turn back into humanoid form and letting fly with whatever weapon you have equipped. Firing weapons drains ammo from your ink tank, which recharges when you’re immersed in a pool of your team’s ink.

You swim much faster within pools of friendly ink, than if you’re swimming over un-inked ground. When you are standing in a pool of the other team’s ink, you take damage and also get stuck.

When the match is over, Splatoon tallies up the percentage of map space controlled by each team, and calculates the winner. Each match only lasts three minutes. Every moment counts, and the tide of battle can turn very quickly. 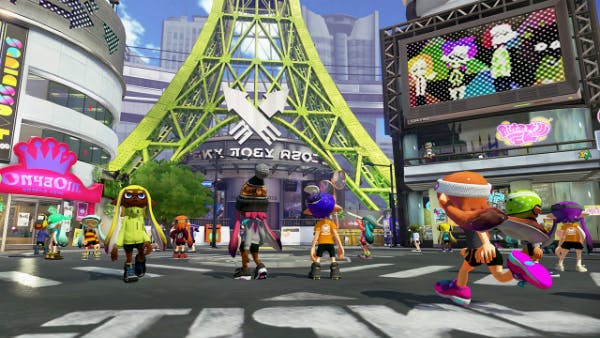 The game begins in the Plaza, a cartoon-style miniature Times Square that serves as Splatoon’s hub for gear upgrade shops and access to the single-player, multiplayer, and 1-on-1 local play modes. The Plaza is filled with other players’ Inklings, which mill around akin to how the Mii Plaza works on the Wii U. The Plaza is as close as Splatoon gets to creating a sense of online community.

The four shops in the Plaza sell weapons, headgear, clothing, and shoes respectively. Guns are unlocked for purchase as the player levels up their character, and are bought using money earned during each match.

Headgear, clothing, and footwear all combine into outfits that look like something you’d wear onto a tennis court or to hang out in a skate park. Each piece of gear begins with one of 24 different base attributes, like increased run speed, a decrease in the amount of ink drained from the tank when firing weapons, or increased damage dealt or damage taken. Gear gains new powerups as the player earns experience.

You can inspect other players’ avatars in the Plaza, and if you like the gear they’re wearing you can order the same hats, shirts, or footwear via the help of a shady miscreant who hangs out in an alley off the Plaza. This only works once a day, but it’s a nice tool for trying out different strategies while saving time you might otherwise have spent in one of the shops. 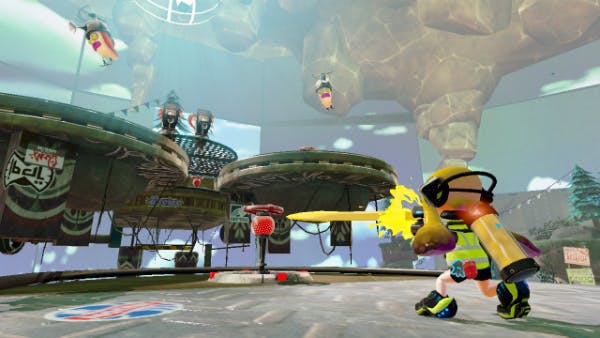 The available maps or stages rotate throughout the day, communicated to the player via an Inkopolis News broadcast. The news is mandatory to watch when you first load into Splatoon, and “breaking news” broadcasts will interrupt the game as the maps switch, and let you know what the new stage selections are.

These news broadcasts got on my nerves as you have no choice but to watch them. I do, however like that the number of maps is limited to a small selection at any given time. Map literacy, learning all the nooks and crannies like the choke points and best places to ambush the enemy, is key to success in any multiplayer shooter. Only rotating between two maps at a time means you learn them quickly.

The single-player mode is a story about rescuing the Zapfish that power Inkopolis from bad guys called Octarians. The levels are accessed via a hub world called Octo Valley, and mix platforming with the survival and battle skills Splatoon players will need in the multiplayer mode.

A minigame called Squid Jump that feels like a simplified version of Doodle Jump is available via an arcade cabinet in the Plaza. You also can play Squid Jump on the GamePad screen while waiting for other players to join a match. Splatoon will save your Squid Jump progress before the match begins, so you can continue during the next pre-match period.

Nintendo is selling three amiibo exclusively for use with Splatoon that unlock unique outfits and challenge modes. The amiibo I was sent by Nintendo unlocked Octo Valley challenges that revolve around using a sniper rifle exclusive to beat the levels.

The Battle Dojo in the Plaza is the gateway to 1-on-1 local matches. Local play is the only time you can use a Wii U Controller Pro with Splatoon, and this is one of my two issues with the game. The GamePad is heavy and unwieldy. Being forced to use it in a multiplayer online shooter of all things is ridiculous.

One reason for the GamePad as primary control input is to enable the gyroscopic controls, i.e. aiming by moving the GamePad around, but this is an option I switched off the second I was able to do so. A Nintendo spokesperson also told me that only the GamePad is supported online because players need the minimap to trace the progress of the battle during a match and to use the touchscreen to select other players to spawn on.

Neither of these functions require the GamePad to be used as the primary control device. The GamePad could be propped up in its plastic holder on a table in front of the player and used as a second screen. Flicking my eyes slightly down from the television screen to give the minimap a glance and understand how the battle is going would be much better than looking away from the TV screen entirely. And I could press on a teammates’ position to respawn at their location just as readily by using the GamePad as a second screen. 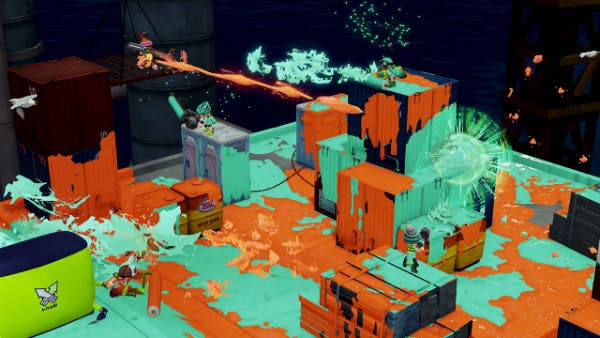 My other issue with Splatoon is the lack of a chat function. If I want to cooperate with friends who own the game, we’re going to need to jump into a Skype room or something. The lack of chat functionality is going to be my biggest roadblock in convincing any friend who owns a Wii U to buy Splatoon so we can play together.

Splatoon’s frivolity helps cover the lack of chat, to a point. With only a three-minute timer per match it’s not as though I sink a ton of time into each battle and thus feel like my time is wasted when I’m stuck with teammates who don’t seem to know what they’re doing. And I couldn’t blame Nintendo if the motivation for not including VOIP in Splatoon was an unwillingness to invite the kind of shit-talking one usually has to suffer in open-voice chat on core console games.

I’m still stuck playing Splatoon only with randos who often don’t seem to realize when it’s time to press a flank, or when a line of defense needs to be abandoned in order to let the enemy overextend themselves and make their rear areas vulnerable to counterattack. The same basic tactics and strategies I use in any match of Call of Duty are applicable to a match of Splatoon, but I can’t try to organize teammates accordingly.

Online multiplayer shooters are about as far out of Nintendo’s comfort zone as it can get. There are plenty of third-party games on the Wii U with core gamer appeal, but first-party Nintendo games rely almost entirely on existing and beloved characters like Mario, Link, Kirby, and Yoshi, to sell copies to devout fans of Nintendo’s brand.

This has limited the appeal of the Wii U to the Nintendo rank-and-file. While it seems like most gamers have a lingering respect for Nintendo and genuinely want the company to succeed, people aren’t putting their money where their mouths are and adopting a Wii U to sit alongside a PlayStation 4 or Xbox One.

Splatoon might change this. I look forward to sticking the GamePad in the hands of my visiting gamer friends, because I have zero doubt that all of them would enjoy a few rounds of Splatoon.

The online servers for the retail version of Splatoon have been live since Tuesday and Splatoon was released in Japan on Thursday. I’ve been playing online matches for several days and experienced zero issues with matchmaking, or any sign of lag, and I’m mostly playing against people on the other side of the Pacific.

While the truest test of Splatoon’s netcode will begin on Friday night when North American gamers on the East Coast start arriving home from work and hitting the servers in droves, I’m confident that Splatoon’s performance won’t suffer enough to have warranted a delay in publishing this review. We will update the review accordingly if server performance does appreciably deteriorate, following Splatoon’s North American release.

Disclosure: Our copy of Splatoon, and our Splatoon amiibo were provided by Nintendo.