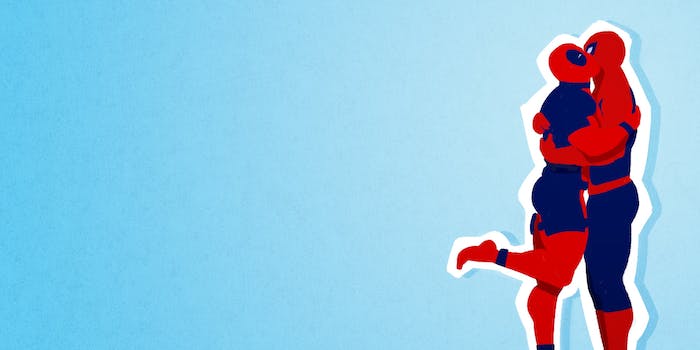 Will the Spider-Man/Deadpool crossover comic be the love-fest fans want?

This unlikely team-up of Wade Wilson and Peter Parker has recently gotten a huge popularity boost.

Fanservice, thy name is Spideypool.

The first issue of the new Spider-Man/Deadpool series—the first time the pair has officially teamed up for their own ongoing series in the Marvel universe—opens exactly as fans of the duo might expect: with Spider-Man hating his life and Deadpool straight-up wanting to tap that. 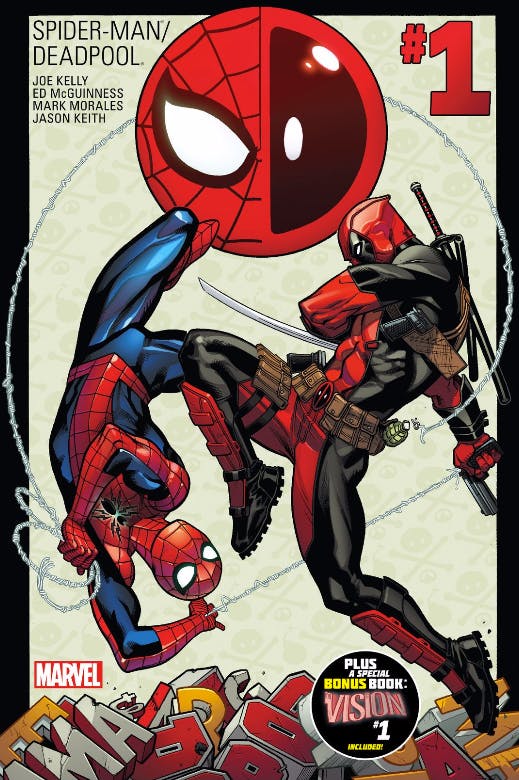 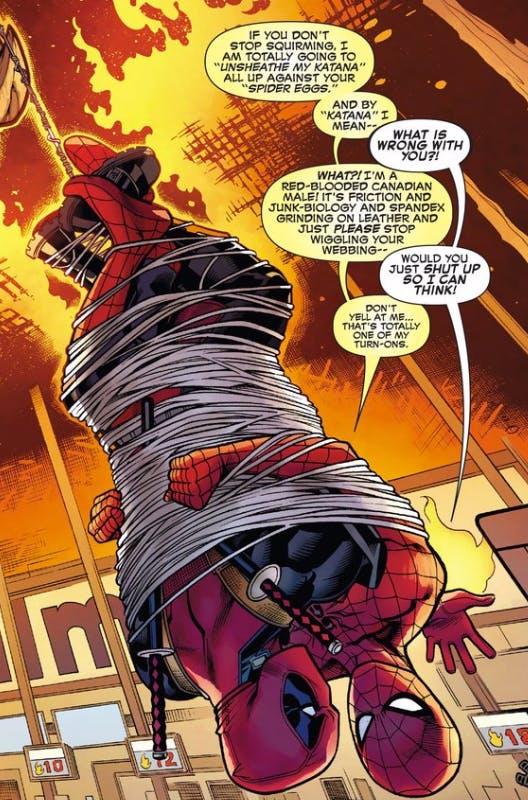 This is blatant pandering to fans of the homoerotic friendship of Peter Parker and Wade Wilson—universally shorthanded as Spideypool.

But it’s also an unusual moment in the Marvel universe, in that it’s perhaps the first time ever that Marvel has so directly and deliberately courted fans of male/male romanic pairing (AKA slash). In this case, the new comic only exists because shippers of a potential queer relationship between Spider-Man and Deadpool demanded it.

Spider-Man/Deadpool reunites the creative team of Joe Kelly and Ed McGuinness, the writer and author who helmed the original 1997 Deadpool series—Wade Wilson’s first solo outing. Deadpool was initially conceived as a snarkier parody of Spider-Man and has always been closely associated with him as a kind of cantankerous doppelganger. (In one early Deadpool issue, the Merc with a Mouth swings into a vintage issue of Spider-Man and replaces Spidey himself with hilarious ease.) For his part, Peter Parker has always professed himself “disgusted” with Deadpool and his amoral ways—though this hasn’t stopped him from working seamlessly with Wade year after year whenever the need arises.

The Spidey/Deadpool team-up has always been a huge hit with fans, and Spideypool as an OTP—one true (romantic) pairing—is so popular that generally even the dudeliest of dudebros in the Marvel fandom seem totally cool with it. It helps that Deadpool himself is perhaps the most famously pansexual character in comics. Canonically, he’s spent years both flirting with and hero-worshipping Spider-Man. Meanwhile, the cultural campaign for queer Peter Parker has been going strong for years now, bolstered by the Internet’s love for insisting on diverse representation in geek media.

The campaign was a success. When the Spideypool comic was announced at Comic-Con last July, the creators acknowledged the Spideypool fandom and hinted that the queer overtones that existed between the characters would find their way into the series. While only one issue of Spider-Man/Deadpool is out so far, the fandom has been generally overjoyed by the homeroticism that fills the pages. Two official variant covers that parody the famous upside-down Spider-Man kiss have only fanned the excitement:

The entire existence of Spider-Man/Deadpool as a comic raises fascinating questions about the interplay between fans and creators. So far, the comic seems committed to exploring the homoerotic elements of Spideypool’s often-antagonistic relationship—or at least putting in plenty of gay jokes about it. That’s a far cry from allowing the two to actually develop a queer relationship.

One of slash fandom’s perennial conflicts with creators involves accusations of queerbaiting—that is, that creators of a popular story are pandering to slash fans by teasing a queer relationship that will never happen in the actual storyline. Queerbaiting is generally seen as exploitative and homophobic, since arguably fans are being asked to settle for homoerotic subtext in lieu of meaningful queer representation.

But in this case, an avid slash fandom initiated the series, with all its queer fanservice, to begin with.

Is it still queerbaiting if the fans wanted it to happen in the first place?

And is it still queerbaiting if one half of the pairing is already canonically queer—even if the other character has long been contractually stuck in the closet? According to information leaked in the infamous Sony hacks, a licensing agreement between Marvel and Sony includes a contractual “Character Integrity Obligation,” which states that Peter Parker’s character can never be portrayed onscreen as gay. Other, alternate versions of Spider-Man can be portrayed as gay or queer only provided that “Marvel has portrayed that alter ego as a homosexual.”

In other words, Sony couldn’t represent Spidey as openly queer onscreen. But if the Spider-Man/Deadpool comic goes there, it could unravel that potential representation for future cinematic versions of the Webbed Wonder.

Meanwhile, the Spideypool fandom is growing. Forty percent of the 2,000 works of Spideypool fanfiction that exist on the Archive of Our Own has been written within the last year. On Tumblr, one doujinshi (Japanese comic)-style piece of Spideypool fanart originally posted to deviantART in 2014 has recently been going viral. The piece is a classic (slightly graphic) piece of hurt/comfort that shows Peter crying over a Wade he thinks is too wounded to regenerate: 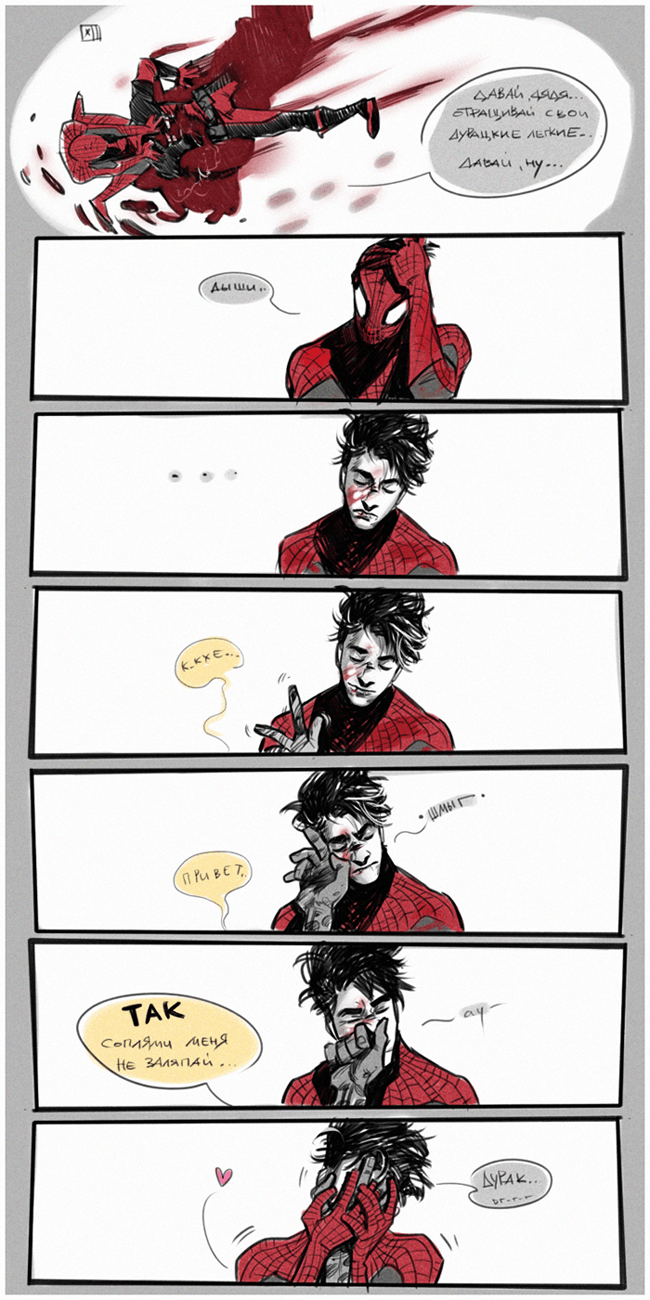 Clearly it’s a good time to be a Spideypool fan. But there are plenty of fans who are skeptical. While Deadpool is currently the literal poster-child for foul-mouthed pansexual assassins, he’s not exactly a positive portrayal of queer sexuality. In the comics, references to the queerer side of his sexuality are almost always played for laughs. Some fans have argued that writer Kelly’s general portrayal of Deadpool is homophobic. Numerous Deadpool writers along the way, including Kelly, have tried to minimize his queerness or de-gay him, some by putting in “no homo” comments that attempt to “straighten” his character.

“Deadpool also gets to fly under other readers’ gaydar as straight passing because the character never acts on any sexual and/or romantic urges that are not presented as heterosexual,” wrote Comic Book Resource’s Brett White last year. “The character attracts a queer readership but never actually pursues or engages in any type of queer relationship.” White is essentially arguing that Deadpool as a character epitomizes queerbaiting.

While Star Ryan Reynolds and director Tim Reynolds have both confirmed that the upcoming movie version of Deadpool is pansexual, some fans have worried that his character will be “straightened” as the Deadpool movie approaches. And one recent post urges Marvel fans not to read “the weird queerbaity Spider-Man/Deadpool comic.”

Their fears do seem to be realized: A few pages after that first memorable opening panel of Spider-Man/Deadpool, we learn that Wade was faking his sexual arousal in order to escape, making what initially seems like a straightforward depiction of sexual orientation a straightforward “no homo” cop-out instead.

On Monday, the series editor Jordan White gave a thumbs-up to the pairing love—but cautioned fans not to expect too much from the comics themselves:

It’s still too early to say whether the rest of the Spider-Man/Deadpool comic will assuage their fears or not. The Spideypool relationship undoubtedly serves as a unique focal point for a new level of fan-creator interactivity. But with a growing number of fans invested in Deadpool’s status as a queer character, increasingly willing to call out homophobic portrayals in the media, that interactivity could sour quickly.

This might be one case where too much fanservice might wind up causing more problems than it solves.