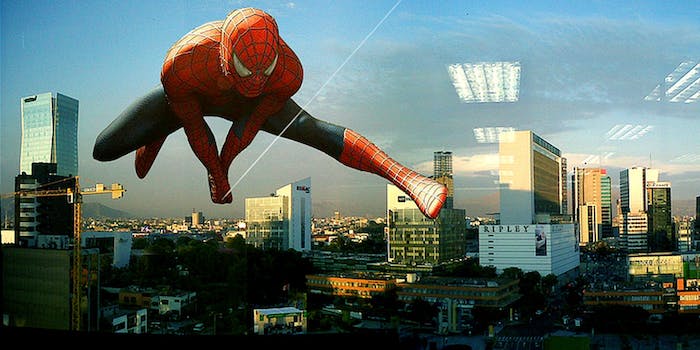 In 2010, Donald Glover began a popular campaign to play Spider-Man as a callout to the ubiquitous whiteness of superhero films. Everyone from Stan Lee to Brian Michael Bendis supported the movement, and Bendis was famously inspired by Glover to create the first Black-Hispanic character to wear the cowl, Miles Morales.

In the years since, fans have grown vocal in their calls for license-holder Sony to bring Miles Morales to the screen, or to at least allow Peter Parker to be played by a non-white dude. To add to the call for change and diversity, many people, including Andrew Garfield, have questioned why Spider-Man can’t be gay.

But apparently, these cries for representation were hampered all along by something we never expected: contractual bigotry. A licensing agreement between Marvel and Sony has just surfaced (thanks to Gawker) as part of the Wikileaks Sony hack. The document outlines a long list of specific dos and don’ts regarding the portrayal of Spider-Man, and here’s the kicker:

Peter Parker can never be portrayed as non-white or gay.

The agreement is so insistent that Peter Parker can never be anything but “caucasian and heterosexual” that the document mentions it no less than three times. There’s also a huge list of specifics for Spider-Man in general, including Parker’s alter-egos, which also takes pains to specify that the character must never be gay except in specific limited cases:

We’re not even going to touch the fact that Spider-Man’s potential queer identity appears on this list of forbidden traits after a long list of morally reprehensible vices.

The contract says alternate Spider-Man characters in “New Authorized Works,” meaning versions of Spider-Man that haven’t been created yet, can be portrayed as gay and presumably non-white as long as Marvel Comics created them that way to begin with. How gracious. But Peter Parker, who will always be the most popular and lucrative web-slinger, can never be anything but white and straight:

This shit is enough to make Uncle Ben rise up from his grave in order to die painfully all over again—and we’re not even talking about the fact that these contract terms doom us to seeing the same well-trodden, tired Peter Parker origin story play out on our screens again and again.

The contract specifically lists alter-ego versions of Spidey who fall under Sony’s purview as holder of the license to Spider-Man. Examples include Miles Morales and Miguel O’Hara, the first Latino character to wear the cowl. But the contract also gives Sony no incentive to produce films about characters other than Peter Parker—and in fact, one clause allows Sony to jettison any parts of an alter-ego’s backstory they don’t like:

For the avoidance of doubt, the Production shall not be otherwise required to use the
Alternative Version’s origin story or basic origin elements

We seriously hope that these contract terms have changed along with the new agreement allowing Marvel Studios to borrow the character for the Avengers franchise and other parts of the Marvel Cinematic Universe.

After all, if Peter Parker can only be portrayed as canonically heterosexual, then convoluted rights issues aside, what does that do to all of his canonical chemistry with canonically pansexual Deadpool? The world deserves Spideypool, Marvel. You’re only standing in the way of yourself.

Above all, the timing of this news reminds us how utterly outdated and implausible is the idea that a white male superhero, with all his built-in privileges and protections, can continue to represent the ultimate underdog to a vast and diverse viewing public.

We expect more from our superheroes; but more to the point, we expected much more from Marvel and Sony.