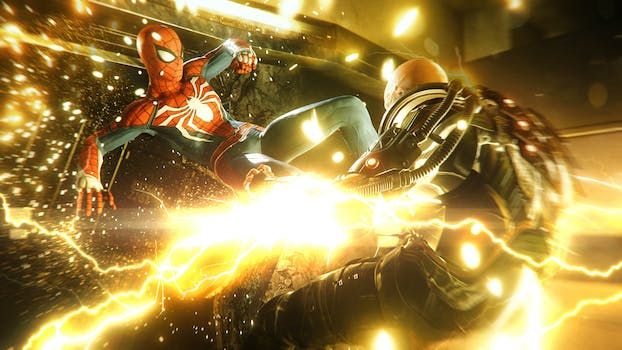 After going hands-on with Sony's upcoming action title, we couldn't be more excited.

After picking up the controller, my demo began with Peter Parker leaping from his perch on a crowded city street. The pavement rushes up to meet him as he arcs his arms behind him and suddenly, everything slows to a halt. All motion blurs, and the prompt “Press R2 to swing” begins pulsing at the bottom of the screen. Spidey instantly zips back to action, catapulting across the avenue and on to the next adventure.

This first swing is an important moment in every player’s experience. Trailers and gameplay clips of Spider-Man released so far give the impression that the team behind Sunset Overdrive understands what makes the webslinger so special, but only holding a controller can convey how great it feels to soar over the wide open streets of New York City as your friendly neighborhood hero. Almost every moment spent roaming is as exciting as the opening swan dive, with a skyline full of towering buildings teasing endless opportunities to explore.

At E3 this year, a demo of the upcoming PlayStation action game let players get a taste of the open-world game with few restrictions. Outside of the opening tutorial to learn controls and start swinging, what Spidey did was entirely up to choice. My first idea was to start moving around as quickly as possible, to get a better sense of how well the action controls. And for the most part, it feels like everything I wanted.

One of the biggest talking points around the reveal of this project was the emphasis on opening the city up to players. People often point to the PS2-era Spider-Man 2 game as the pinnacle of how a superhero game should feel. There have been so many Spider-Man games in the past, and many of them left fans disappointed. One consistent core mechanic, though, is exploration. Shooting webs and flying about the city is as core to Spider-Man’s identity as Uncle Ben’s murder or his penchant for quippy puns. Even past games that flubbed combat or presented a convoluted story still made an effort to entertain with open-world action.

But it’s never felt as good as it does here. Holding R2 puts the hero in a swinging arc, moving forward until the moment of release. If you keep pressure on the trigger, Spidey will swing back around in large half circles. In mid-air, the X button provides a burst of speed by way of a small web shot. Doing so can help you zip between buildings, vault obstacles, or make your way up the side of a skyscraper. At high speeds, your movement needs to be precise. It can be easy to miss a ledge prompt and slide into an oncoming wall. The quick recovery this zip offers is extremely helpful when it comes to keeping the player in constant motion.

When not flying high above New York, there are plenty of activities to keep the wallcrawler busy. The E3 demo featured a number of possible combat encounters, each tucked away in different corners of the city. Following police chatter or a direct tip from an assistant, Spider-Man crashes the party and directly engages with criminals. Before engaging, you can still move between perches above the perps, stalking them in a similar manner to Batman in the Arkham games.

And that comparison doesn’t end there. Hand-to-hand combat feels a lot like Rocksteady’s excellent superhero series, but not a direct lift. Spider-Man is obviously lighter and more acrobatic. He can freely flip over enemies, stick to walls, and run laps around incoming foes, thanks to his Spidey-sense. With a suite of tools like web bombs and trip wires, it seems like each situation can be approached with an emphasis on preparation and stealth before engaging.

My demo ended in a battle with the Shocker, as he started robbing a bank. Peter burst in, blasted off a couple quips, and was ready to dodge jolts of electricity. The fight takes place in a circular hall, with Herman Schultz’s villain standing in the middle, guarded by a shield. Taking him down required throwing objects into the force field and turning Shocker’s power against him. The story has teased plenty of villains’ presence so far, but there are sure to be many more hiding in plain sight when the city opens up.

Everything is made better by the engine’s fantastic visuals, with a diverse color palette filling the sky. Sunlight bounces off buildings, all animations are remarkably fluid, and the amount of moving parts on the city streets is always impressive. Fans had high hopes when the PlayStation exclusive Spider-Man was revealed two years ago, and a few months out from release, it seems like they won’t be let down.