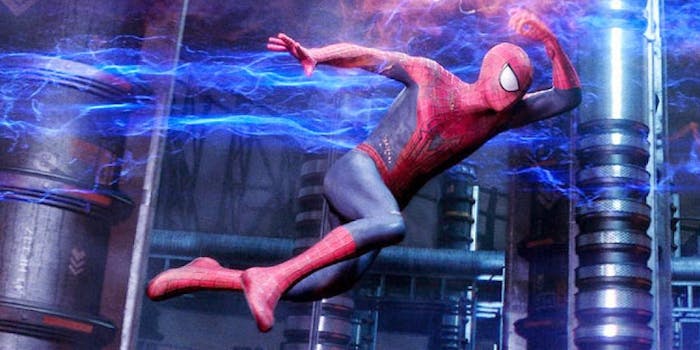 ‘Spider-Man’ producers say diversity is ‘inevitable,’ but don’t get excited

They shot down a Miles Morales Spider-Man afterall.

Amazing Spider-Man producer Avi Arad is putting out some mixed messages on the topic of race and representation in the Spider-Man franchise.

Last week, he and his co-producer Matt Tolmach made it very clear that Spider-Man would “always” be Peter Parker, for as long as they are in charge. This was specifically in reference to a question about whether they might consider including Miles Morales—a young man of black and hispanic decent who becomes Spider-Man in the Ulimate Marvel comics—in the Amazing Spider-Man’s expanding universe. In other words, Spider-Man is white, and he has to be white forever, because of… reasons.

On the surface, a new interview with Arad appears to put a different spin on things. Describing diversity as “inevitable,” Arad took note of the dated nature of all-white casts, saying that times are changing. “I think we are finally becoming more of one world,” he said, “and you’re going to see more and more diversity in the selection of characters. It’s not about saying, ‘Well, in the comic he was white, so he cannot be…’ You know, Nick Fury was white… It’s all going to change.”

In the past, Amazing Spider-Man star Andrew Garfield has spoken about his worries that Peter Parker no longer represents the same kind of underdog hero he once did. Along with mentioning the possibility of Miles Morales taking over after the current trilogy is finished, he even suggested making Peter Parker bisexual. (An idea that was immediately shot down by the Amazing Spider-Man’s director, of course.)

Looking at the full quote from Arad’s new interview, it comes across as the kind of purposefully nonspecific answer you hear when someone doesn’t want to talk about a controversial topic. He says, “We would love Marvel to create a superhero—we can create villains, but we’d love to have a Chinese superhero with something that is really interesting and how they got here, and what is their issue, and so on. But it’s coming. And it’s inevitable.” This doesn’t sound like someone with a burning desire (or even a vague intention) to push for that “Chinese superhero” to be created. The only thing really counting in his favor is the fact that The Amazing Spider-Man 2 cast Jamie Foxx in a role that was taken by a white guy in the original comics.

However, this latest interview indicates that this type of casting was more to do with a grudging acceptance of the “inevitability” of catering to diverse audiences, rather than any kind of active decision on his part. His immediate rejection of a Miles Morales Spider-Man movie probably tells us more than a few vague statements about changing times.