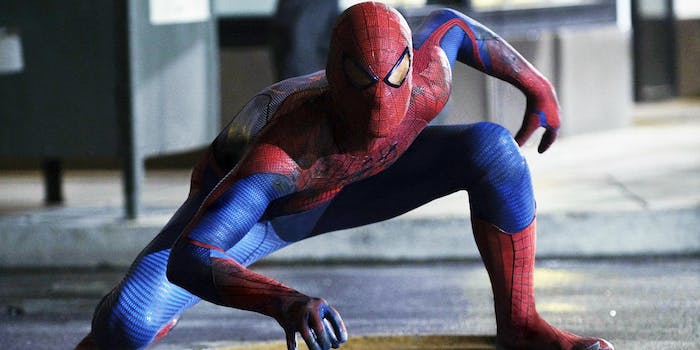 Spider-Man seems to be turning into Sales-Man.

At some point, someone at Sony realized that Spider-Man is the ideal superhero for advertising whatever the hell you want. Why? Because you can’t see his face, so you don’t have to pay Andrew Garfield to appear in your bizarre dancing Spiderbaby mineral water commercial.

Yes, dancing Spiderbaby. This isn’t the first weird Amazing Spider-Man 2 product tie-in, and it almost certainly won’t be the last.

If you’re familiar with Evian’s “Baby & Me” ads, then the Spiderbaby commercial will make sense, more or less. If not, then you’re going to wind up wondering who signed off on something where Spider-Man dances with a baby clone of himself while shilling bottled water.

Some advice for future Spider-Man advertisers: It’s probably best to avoid things that bring back memories of the dance sequence from Spider-Man 3, i.e. the worst superhero movie since Batman & Robin.

Continuing on in the theme of inappropriate product endorsements, Spider-Man also recently starred in an ad for the U.S. Postal Service, along with Marvel mastermind Stan Lee.

Evian and USPS—two brands that the teenage target audience of The Amazing Spider-Man 2 are sure to appreciate. This kind of thing is not helping to promote the illusion that 30-year-old Andrew Garfield is still a convincing choice to play a high school senior. Perhaps he should drink more Evian?

It’s pretty much impossible to find a major Hollywood movie that isn’t full of product placement scenes, but some characters are better suited for it than others. James Bond is a prime example, because he’s known for his love of luxury and can therefore be used to endorse cars, watches, liquor, menswear, and basically anything rich people enjoy. Iron Man’s Tony Stark is similar. His weirdest product placement so far is probably the Iron Man armor bracelets Robert Downey Jr. wears in The Avengers. In real life, those are actually something called “Magtitan Neo Legend Power Bands,” $200 Titanium bracelets that supposedly use “magnet therapy” to increase blood flow and improve sleep patterns. How… badass?

Unfortunately, as a high schooler with no money, Spider-Man is kind of a bad choice for that kind of product placement. But the Spider-Man franchise is owned by Sony, so Peter Parker winds up owning a bunch of Sony products that no penniless teen hacker would be caught dead using. Not only that, but Amazing Spider-Man is one of the many movies and TV shows that includes tie-ins with Bing, a search engine primarily used by people who don’t know how to switch their search bar to Google.

Even the trailer for Amazing Spider-Man 2 is crammed with advertisements, as Spider-Man catches a police car while surrounded by Times Square billboards for Disney and Jimmy Choo. Maybe we’re overreacting here, but it feels like Sony needs to tone it down with the product placement. When a Dunkin Donuts billboard looms larger than the main character in your movie trailer, then you have a problem.

Audiences already have to sit through 20 minutes of commercials before they get to the main event, so is it really necessary to include this much unsubtle advertising in the movie as well? It’s starting to get distracting. Just because you can use Spider-Man to promote everything under the sun, doesn’t mean you necessarily should.